Here’s a list of the 10 teams that will be most active before the trade deadline.

The Sporting News’ Sean Deveney reports that the Magic have “picked up their attempts” to trade veteran power forward Serge Ibaka, and that center Nikola Vucevic and point guard Elfrid Payton are potential trade targets as well. Ibaka, who was acquired from the Oklahoma City Thunder last June, will become a free agent after this season, which explains the Magic’s eagerness to trade the 27-year-old. The Magic’s asking price for Ibaka is said to be a young player and a draft pick, according to Deveney. Orlando is currently five games out of the final playoff spot in the Eastern Conference, but this season has been a disappointment, and GM Rob Hennigan has said he will explore all options to improve the team.

© Dennis Wierzbicki-USA TODAY Sports Will the Bulls be active ahead of the trade deadline?

No one is safe in Chicago. According to K.C. Johnson of the Chicago Tribune, some rival executives think the Bulls and Boston Celtics “will rekindle trade talks centered on Jimmy Butler before the Feb. 23 deadline.” The teams discussed a potential trade involving the three-time All-Star prior to the 2016 NBA draft, but Chicago opted to hang onto Butler. Point guard Rajon Rondo and forward Nikola Mirotic have also been rumored to be available, according to Joe Cowley of the Chicago Sun-Times. The Bulls are in the middle of a playoff race in the wide-open Eastern Conference, but it sounds like the team is interested in selling if they’re willing to part with Butler, Chicago’s best player by far.

The Nuggets have a couple of players they’re interested in trading. One of them is center Jusuf Nurkic. According to ESPN’s Marc Stein, Nikola Jokic and Nurkic “didn’t click as a pairing,” so the Nuggets are trying to find Nurkic a new home where he can be a starter. In addition to Nurkic, Stein notes that forwards Danilo Gallinari, Kenneth Faried and Wilson Chandler might be available. The Nuggets currently hold the last playoff spot in the Western Conference. But with the team heading in a new direction with its younger players, the Nuggets are probably looking to get rid of their veteran players in exchange for young players and draft picks.

The 76ers probably aren’t a playoff team yet despite a wealth of talented players, so we’ll go ahead and assume that they’ll be sellers at the trade deadline. By now, everybody knows the 76ers have too many big men on the roster, and they aren’t about to trade Joel Embiid based on the way he’s been playing lately, so that leaves Jahlil Okafor and Nerlens Noel as potential trade candidates. The latter has expressed frustration about the logjam in the front court. There are plenty of teams in need of rebounding help, and Noel, who is pulling down nine rebounds per game as a starter, could be of service.

Meet Brandon McDuffey, the QB who hasn’t played a HS game but committed to FAU 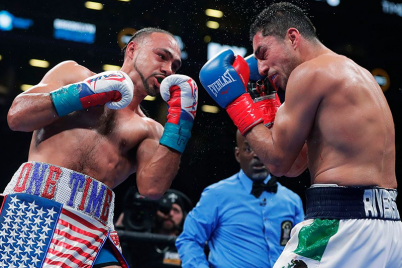 “Thurman prevails in toughest fight yet”

BROOKLYN, N.Y. — No one said it was going to be easy. Least of all, Keith Thurman.…