We smooth it with scrubs. We soften it with creams. We dab it with highlighter. But our skin is so much more than a reflection in the mirror. Our skin is the metaphor that defines how we’re seen — and how we see ourselves. For our April 2017 cover story, Allure asked 41 women of color to tell us the story of their lives through their skin — and skin tone. Because our skin can be both a vulnerability and a defense. But most importantly, it can be a source of celebration.

“I don’t think people realize just how much Latinas vary in skin tone. I have Colombian and Dominican friends who are superdark and others who have blonde hair and blue eyes. We are kind of stepping away from thinking this is what someone Latin should look like, with a light skin tone and big butts. It’s celebrated more now than in the past, just how different Latin women are. My role model growing up was Selena. I love her music, what she represented, her sexiness. And just being herself. She wasn’t trying to conform to something else.”

“Growing up in Uganda, I did not fit into the ideal. I was too dark. I was too tall. But I didn’t really notice I was black until I came to the U.S. Here I’m black, whereas I was just a person in Uganda. [Last year, there was a close-up of Lagum’s lips on the M.A.C. Instagram feed that triggered racist remarks in the comments section.] It wasn’t that big a deal to me — haters gonna hate — and I was able to brush it off. I posted back, ‘My lips are giving you sleepless nights.’ I grew up loved by my family. That love enabled me to love what I saw in the mirror. I learned to love my skin too much to fit someone else’s script. It is the same love that keeps me safe from comments that would otherwise offend me.”

“I’m half Moroccan, half Egyptian, and I was born in Amsterdam. I’m Muslim, and I’m superproud of my heritage and of my roots. I want to be a role model for young girls who are struggling with racism or struggling with their looks or with their skin color. I had Naomi Campbell, who I looked up to as a black powerful woman. But there aren’t many Arabic models, and being an African-Arabic model, I’m trying to open doors for more Arabic girls.”

Watch our cover girls discuss why the fashion industry needs to be more inclusive:

“I arranged a town hall meeting in 2007. The room was packed. There were editors, stylists, model-agency owners — and I sat in front of them and talked about what I thought was inappropriate behavior. [Models of color] were being told, ‘Sorry, no blacks, no ethnics.’ Newspapers started writing articles about ‘Is there racism in fashion?’ And it changed. ‘I’m sorry, no blacks, no ethnics’ has never been said again.”

“My skin is a map of my life. Before high school, I lived in a white suburb of Los Angeles where there were so few Indians that they didn’t even know the ‘correct’ slurs. They called me the N-word or ‘Blackie.’ For a long time I hated my skin color. Even in India, there’s a complicated history. My grandmother discouraged us from going in the sun; she didn’t want us to be dark. We were only allowed to play outside after 4:30. There was a cosmetics line called Fair & Lovely — that says it all. [And] when I started to work as a model, people would on occasion say things to me like ‘You’re so pretty for being an Indian.’”

“I have the most vivid memories of being seven years old and my mom picking me up from my grandmother’s house. There were the three of us, a family tree in an ombré of mocha next to the caramel complexion of my mom and light-skinned, freckled me. I remember the sense of belonging, having nothing to do with the color of my skin. It was only outside the comforts of home that the world began to challenge those ideals. I took an African-American studies class at Northwestern where we explored colorism; it was the first time I could put a name to feeling too light in the black community, too mixed in the white community. For castings, I was labeled ‘ethnically ambiguous.’ Was I Latina? Sephardic? ‘Exotic Caucasian’? Add the freckles to the mix and it created quite the conundrum. To this day, my pet peeve is when my skin tone is changed and my freckles are airbrushed out of a photo shoot. For all my freckle-faced friends out there, I will share with you something my dad told me when I was younger: ‘A face without freckles is a night without stars.’ ”

“My father is German; my mother is African-American. Growing up, I visited my grandparents in Berlin a lot. I would not see any other person of color for three weeks. People would stare. They would say things like ‘Oh, you look like chocolate — I want to eat you up!’ I’ve been to gatherings where people would say, ‘She has so much race in her’ or would use the word ‘n*****’ — or the German term ‘neger.’ And I would be like, Who are you talking to? I feel German, I speak German, [but] I don’t look German. In the United States, if you’re African-American, it can be assumed that your family has been here for generations. In Europe, colonialism is much more alive and it’s assumed you’re from Nigeria or Senegal. I would have these conversations like ‘Where is your mother from?’ ‘Brooklyn.’ ‘No, but where is she from?’ I would respond, ‘We don’t know,’ since we can’t trace our roots beyond North Carolina. Slavery has erased our ability to find our origins. We have been here as long as some of the first immigrants.”

“I was born in Pakistan, and when my mother told me we were moving to Canada, I asked her, ‘What do the people there look like?’ And she said, ‘They look like the show you watch, Full House.’ So I assumed that when I would arrive in Canada, I would turn into a white blonde. And I was horrified when I got to the airport and I was still brown. I just couldn’t understand that different colors coexist. I think I’ve come a long way from that nine-year-old girl who wanted to trade in her brown skin for white. I love what my brown skin looks like and what it represents. And there are many times I’m fully unaware of my skin. The perfect example is I’m talking to somebody, and they would look at me and say, ‘So how do they do that in India?’ I say, ‘I’m not sure. I’m from Pakistan. But I can Google it for you and find out.’ That always creates such an awkward moment, but I think awkward moments are not bad; they push us to confront our prejudices. Uncomfortable as it is to hear ‘Oh, you speak English really good for a brown lady,’ it really tells me that people have these ideas but there’s no healthy space to ask these things. We lack basic vocab about understanding our differences. Now I love walking into a room and I don’t look like everyone else. I hope that love for my skin I’ve developed as an adult I can pass on to my kids.”

“Up until several years ago, the primary target for most cosmetics companies was the Caucasian consumer. But the population has changed quite a bit, and businesses have had to come up with shades for people of medium to dark skin. I was given the opportunity to measure skin tones. We noticed that there was an area of violet in darker skin tones that had not been understood in the past. We ended up incorporating ultramarine blue, which takes you deeper but not necessarily blacker. I like to say that there’s a new skin tone born every day.”

“We still have a ways to go in terms of skin-care, which is mostly geared toward anti-aging. Women of color have more melanin than Caucasian women, which means we age later, and we age differently. We don’t have fine lines and wrinkles so much as pigmentation; sagging rather than crow’s-feet. I was very inspired by the Black Power movement of the ’70s. Kathleen Cleaver and Angela Davis with their Afros were so authentic! And today, you look at Obama, Michelle, and the kids, and it makes me feel proud. I think it took companies many years to realize the economics of meeting the needs of darker-skinned women. There’s no escape from America realizing that we are brown now. We can only hope that everyone realizes that we’re all Americans.”

“It’s very difficult to get foundation that matches my skin. And I’m all for the contouring stuff, but I like to look like myself. I don’t have a thin nose. You can see my African features, so I like to embrace these things as opposed to covering them.”

“I was born in Korea, but I came to Canada when I was six months old. I’m Canadian. From the time I was six or seven, I was obsessed with beauty. My dolls had eyeliner and extra eyelashes. I cut all my friends’ hair and did their prom makeup. When I was at university, I got a part-time job working at a M.A.C. counter. One day I did this woman’s makeup, and afterward she said to me, ‘You must be so proud of yourself — your English is superb!’ I was speechless. The other thing growing up was people asking me if I was related to Bruce Lee. Is he the only Asian person you know? More makeup artists now know how to do Asian eyes. The fake-crease thing drives me to drink. Our eyes have monolids — they’re flat! Why are you trying to make us look like white people?”

HEATHER WOOLERY-LLOYD, DERMATOLOGIST AND DIRECTOR OF ETHNIC SKIN CARE AT THE UNIVERSITY OF MIAMI MILLER SCHOOL OF MEDICINE

“I was the only black child in nearly every class from kindergarten through college. I was very academic. I cared about SAT scores. I was a bookworm. I didn’t develop any major insecurities — except about swimming. My hair! Swim parties were not a simple thing. I went to school with the model Niki Taylor. She was an exceptionally kind person, and one day when I had won some award, she congratulated me and told me how lucky I was. I remember thinking, You are on four magazine covers this month, including the Seventeen magazine that’s in my backpack. But I always had my identity as a student. African-Americans are really underrepresented in dermatology. I felt this huge responsibility to learn everything there was to know about women of color. Many black women who are dealing with embarrassing issues, like hair loss, do not want to come in and take off their wig for a doctor who isn’t an African-American woman. During my residency, I specifically took advantage of every opportunity to learn about dermatologic conditions in skin of color, because I knew when I completed my training that patients were going to seek my expertise.”

How Natural Hair Became The Darling Of The Luxury World

Are Probiotics Anything More Than Hype?

By Tara Smith, SELF Probiotics are everywhere. While this “good guy”… 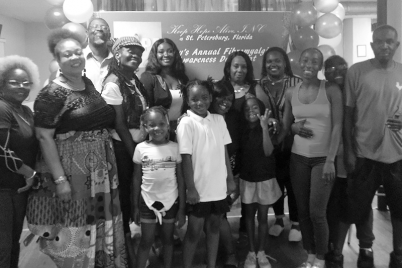 Fibromyalgia event aimed to bring awareness to the disease