George Foreman’s chance at another title came in 1994 against WBA and IBF champ Michael Moorer (right).

As the 40-year-old marvel Manny Pacquiao recently proved with his win over Clearwater’s previously unbeaten Keith Thurman, we should never count a great fighter out no matter how many rounds he’s racked up over the years.

This year marks the 25th anniversary of another ageless wonder climbing into the ring to face a much younger opponent and completing a comeback for the ages.

Against all the odds the indefatigable George Foreman, who first grabbed the heavyweight title in 1973, reclaimed the crown more than two decades later at the age of 45.

His unique life’s journey started with a troubled childhood and took him from being a merciless bruiser handing out beat downs in the ring to an ordained minister lifting spirits in the church. He became an analyst, author and entrepreneur. Yet, he always had a battler’s heart.

Foreman became attracted to the sweet science in his teens, and as an up and coming amateur, he qualified for the 1968 U.S. Olympic boxing team. Making short work of his hapless opponents on his way to capturing the gold medal in the heavyweight division, the big Texan turned pro the following year and proceeded to mow down all comers with his fierce punching power.

As fearsome a fighter as any whoever put on the gloves, Foreman walloped and stopped the tough-as-railroad-spikes Joe Frazier in only the second round of a 1973 bout to win the WBA and WBC heavyweight titles. A year and a half later, undefeated Foreman would face the aging yet still charismatic Muhammad Ali in Zaire for the Rumble in the Jungle.

There probably isn’t a single man, woman or child on the planet who by now doesn’t at least have a passing knowledge of the “rope-a-dope” tactic Ali employed to emerge victorious.

Ali, always knowing precisely how to handle his opponents, simply hung back and held on for dear life as Foreman brutishly swung at Ali’s well-protected mid-section like a man trying to knock down a tree with his fists.

In the eighth round, with Foreman finally exhausted and outsmarted, Ali picked his spots, landed his shots and felled the mighty giant in front of an exhilarated African crowd to wrest the titles.

Foreman would pick himself up from the canvas and fight only another half dozen times — the last time dropping a decision to Jimmy Young in Puerto Rico — before ostensibly retiring from the ring in 1977. After that last fight, Foreman felt his spirit was in a place of despair, and soon he became a born-again Christian.

In dedicating his life to God, he became a reverend, preached at the Church of the Lord Jesus Christ in Houston and opened a youth center.

Out of the sport for a decade — an eternity for a fighter — Foreman decided it was time to once again lace on his boxing shoes and step out onto the comeback trail at the overripe old age of 38. Drawn back to the ring to raise money for his youth center, he was determined to fight his way back up the ladder and see if he had any magic left in his mighty fists.

As the world would find out, Foreman still had some thumpings up his sleeve.

For four years, Foreman dispatched every fighter he faced — almost all by KO and nearly every one of those wins came inside of four rounds — to set up a shot at the title in 1991 against the one and only Evander Holyfield.

Over 42 at this point, Foreman hung with the younger, hard-punching Holyfield for 12 rounds in his toughest test yet. He absorbed some fierce flurries and brutal bashings from the champ, and the magic finally ran out that night in Atlantic City as Foreman lost by decision.

But there was no keeping the relentless Foreman down. Eight months later, the old warrior got back on his horse and defeated three talented fighters in a row before coming up short against the cocky Tommy Morrison, who won by unanimous decision.

Now over 44 years old and coming off a loss, Foreman still was a favorite of many fans and boxing pundits alike. His never-say-die attitude was inspiring youngsters who weren’t even born when he first marauded his way to the title in the early 1970s.

However, this was a kinder, gentler George. Not the sullen, scowling executioner that looked across the ring at his opponents with death in his eyes. Everybody was pulling for this big teddy bear with the kind heart.

His chance at another title came in 1994 against WBA and IBF champ Michael Moorer. Undefeated in 35 bouts,

“Double M” was 27, in his prime and a clear favorite to put old man Foreman out of his misery in the early rounds.

It would be an old-timer squaring off against a whippersnapper, and many wondered whether Foreman could conjure any more victories as he stood ready to face Moorer in the MGM Grand ring in Paradise, Nev., a couple of months shy of his 46th birthday.

Looking overweight and moving slowly, Foreman kept fending off attacks by the quicker and more aggressive Moorer. The champ established his jab right away and kept peppering a retreating Foreman with rights and lefts while Foreman himself plodded slowly along, throwing unsure punches with all the speed of a poorly-constructed paper airplane.

Through nine rounds, Moorer moved forward and repeatedly struck his target while Foreman lumbered back and to the side, seemingly debating on whether he should formulate any cohesive attack of his own.

Outboxed and outgunned heading into the tenth round, Foreman trailed on all the scorecards. But the once-upon-a-time-champ was determined to finish his Cinderella story with a coronation of his own.

Needing a knockout to have any hope of winning, Foreman trudged out to meet Moorer in the center of the ring and promptly ate some leather. But Foreman wouldn’t give up that easily. This time he was the one coming after his opponent, forcing him back with more spirited punches.

Moorer, wary of getting caught with a powerful shot in the late rounds, kept circling to his right to stay away from Foreman’s right hand of granite. But Foreman adjusted to the southpaw’s movements and was waiting for Moorer with a few left hooks, which he unleashed to rattle Moorer a bit.

Then, showing more quickness than he had in the whole fight (in his entire career, possibly), Foreman drove home the exclamation point of his entire comeback. He shot off a jab followed a nanosecond later by a thunderous right hand, which he bashed into Moorer’s face with the force of a battering ram.

Moorer flopped to the canvas, face bloodied and body splayed flat. With the referee counting over him, he weakly tried to roll over in a daze, but there was no getting up from that vicious blow. The comeback was complete and old man Foreman was finally heavyweight champ again!

Foreman would take on a few more bouts, defending titles along the way, before fighting for the last time in 1997, at the incredible age of 48. He has inspired multiple generations as a man who is resilient and philanthropic, a man who has a genuine knack for business and a deep love for God and family.

But on that one night in Nevada, he proved above all to be a man who refused to be counted out. 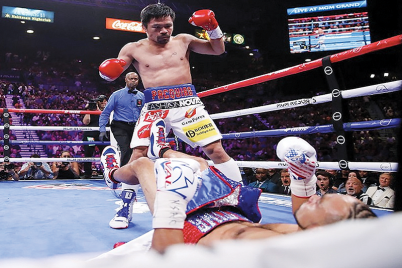 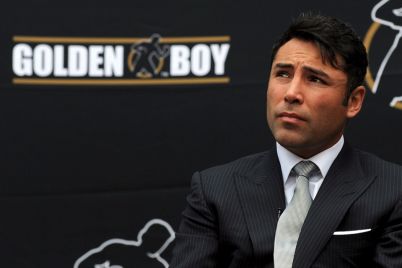 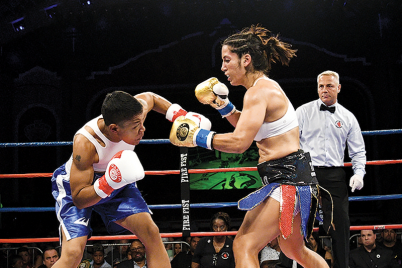 Saturday night fights at the Coliseum