The campaigns to elect Anne Hirsch for District 5 and Akile for District 7 City Council calls for an end to the construction of luxury condos and apartments in St. Petersburg!  We call for reparations to the black community for economic development and affordable housing.

City officials such as Mayor Kriseman, Ken Welch, Steve Kornell and a current city council candidate for District 5, Trenia Cox, were present at the groundbreaking ceremony for a new luxury apartment building on 34th Street South. These city officials and Cox are out of touch with what the majority of the people in St. Petersburg need and want.

A black community-owned affordable housing complex on 34th Street would better serve the black community of the south side and the needs of the people in St. Petersburg.

When reparations are paid, the Skyway Marina Mall will become a business incubator for the folks who live in the affordable housing nearby.

The Skyway Marina Mall was a black community cultural outlet that has now been turned into a white hipster antique shopping mall.

Areas of the south side of St. Petersburg have historically been black because the original white city government officials would not allow black people into downtown or passed 15th Avenue South.

The 22nd Street South business district, affectionately known as the Deuces, became home to the historic Manhattan Casino and other black businesses.  It was a place where the black community thrived.

That is until an interstate came through to transport white people to the beach and the southern part of the state more easily. That interstate cut through the neighborhood, closing and relocating most black-owned businesses.

Gentrification has been an ongoing process to push the black community out of St. Pete.

The Gas Plant district, another historic black community neighborhood with 100 businesses and 300 homes, was razed to build the Tropicana Field. The city used $110 million of our taxes to subsidize a sports dome for a for-profit failure of a baseball team. The city council has continued to allocate millions each year to subsidize it.

That kind of resources can be rerouted to reparations to the black community so that the black community can rebuild affordable housing and rebuild black businesses on the south side. That is the most progressive sustainable plan this city could implement.

Reparations means an ongoing commitment to redirect resources in the city budget for redevelopment in the hands of the black community.

The Skyway Shopping Center on MLK and 62nd Avenue South is almost empty. Reparations would allow black-owned businesses to open there, providing shopping opportunities near home for everyone in District 5.

If the current city council and Beth Connor, currently running in District 5 and who is in the same gentrification camp as Karl Nurse, have anything to do with it, the black community will be non-existent in St. Petersburg in a few years. 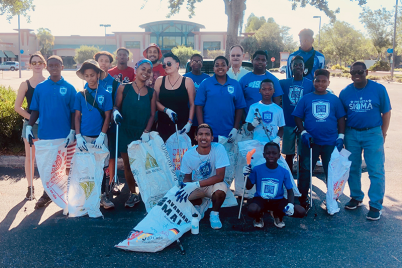 Cleaning up our streets

Dear Editor: My name is Whitney Sanchez and my husband, son, and I have lived in south…

Dear Editor, This Sun., April 5, congregations in St. Petersburg will be packed with…