A federal grand jury in New York has indicted eight of the ten individuals charged in connection with the joint FBI-Justice Department investigation into corruption within college basketball.

The time to return an indictment was extended for a month for two defendants: Brad Augustine, the AAU program director who stepped down, and financial adviser Munish Sood. Augustine was accused in a criminal complaint in September with brokering and facilitating corrupt payments in exchange for a promise from players to retain the services of Sood and a sports agent also charged in the case while Sood was described as paying bribes to the coaches.

In late October, prosecutors said in court papers that it was continuing discussions with lawyers for Sood and Augustine to bring about a possible disposition of the charges against them before indictment.

‘Chuck Person did not commit a crime and we’re confident he will be vindicated at trial after a jury hears all the evidence,’ attorney Theresa Trzaskoma said.

Attorney Jeffrey Lichtman said Bland was a hardworking and well-regarded assistant coach who was ‘being scapegoated for all the ills of college basketball – all due to an alleged $13,000 payment.’

‘No multi-millionaire head coach was charged, or any multi-billion dollar sneaker company after years of investigation. It’s not fair and anyone who knows anything about college basketball knows this to be true,’ Lichtman added.

Craig Mordock, an attorney for Richardson, said ‘this is really pushing the envelope of what constitutes a crime.’

He added: ‘An indictment is another step in the process. But once again, Emanuel Richardson is not guilty.’

Lawyers for Evans, Sood and Augustine were unable to be reached for comment.

The FBI and Justice Department announced a massive crackdown on what they have described as the ‘dark underbelly’ of college basketball back on September 26.

According to the complaint, former sports agency employee Christian Dawkins and financial advisor Munish Sood, among others, paid bribes to assistant and associate coaches at Division I schools, including Person, USC’s Tony Bland, Arizona’s Emanuel Richardson, and Oklahoma State’s Lamont Evans. The hope was that in exchange for the bribes, the coaches would convince players under their control, and the players’ families, to retain Dawkins and Sood upon entering the NBA. Two familiar schemes have been investigated by the FBI and Justice Department: One in which recruits and their families allegedly received bribes in exchange for commitments to specific universities, and another in which player advisers were supposedly paid to persuade the athletes to sign with certain managers, agents, and financial advisers.

According to acting U.S. attorney in Manhattan Joon H. Kim, the investigation was launched in 2015 and focuses on ‘the criminal influence of money on coaches and student-athletes who participate in intercollegiate basketball governed by the N.C.A.A.’

Person is currently on suspension at Auburn.

Auburn already suspended players Austin Wiley and Danjel Purifoy, who are believed to be the recipients of Person’s bribes. School president Steven Leath previously told ESPN that the two players involved had been identified.

‘To avoid any potential eligibility issues, Auburn Athletics has decided to hold men’s basketball players Austin Wiley and Danjel Purifoy out indefinitely,’ read a statement from Auburn. ‘Because this is related to an ongoing investigation, we cannot comment further at this time.’ While no major college head coaches have been charged, Louisville did fire Rick Pitino ‘for cause’ last month after the school was implicated in the FBI probe.

Being fired ‘for cause’ is significant because it could save the school from paying Pitino’s $44 million buyout.

A two-time national champion and former NBA coach, Pitino was initially placed on unpaid administrative after he was implicated in an alleged scheme to bribe the family of an elite recruit with $100,000 in funding provided by Gatto.

Gatto and his fellow defendants are accused of funneling that $100,000 to the family of a recruit in order to persuade that player to attend Louisville.

According to federal prosecutors, Gatto and Code colluded with Dawkins, Sood and Augustine, who ran an AAU program that was sponsored by Adidas. The hope, according to the complaint, was that a five-star recruit would attend Louisville, hire Sood, and ultimately agree to an endorsement deal with Adidas when he turned professional.

By CLEMENCE MICHALLON FOR DAILYMAIL.COM What fuels a tennis champion? Multiple workouts… 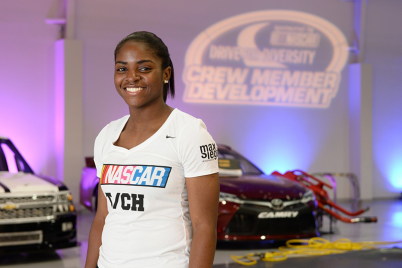 By Brianna Moné | Teen Vogue When you think of NASCAR, the first words that come to…