The Houston Rockets and Dallas Mavericks are at opposite ends of the Western Conference standings. The Rockets at 24-9 are third in the West while the Mavs at 9-23 are in the cellar of the West. Despite their opposite places in the standings, the two teams could be barreling toward the next big NBA rivalry.

On Tuesday, the Rockets beat the Mavs in Dallas 123-107 to improve to 4-0 in the only four games against their in-state rivals this season. After the game, Houston players attempted to confront Salah Mejri about his incidents with Trevor Ariza’s family.

According to the Houston Chronicle, Mejri called out Ariza’s wife and children but later denied that happening at all to ESPN. After leaving his locker room, Ariza went with two security guards and waited outside the exit of the Mavericks’ locker room. Patrick Beverley and James Harden later joined Ariza, and the trio of Rockets later talked with Wesley Matthews and Justin Anderson of the Mavs before eventually heading to the bus.

As it turned out, Matthews told Mejri of the situation and told him to not talk to an ESPN reporter about the issue. From there, Mejri was prevented from leaving the locker room by several team employees and at least one security guard.

The near incident between Mejri and Ariza wasn’t the only one that might have or did occur. Beverley yelled at Dallas head coach Rick Carlisle down the hall after the head coach’s postgame press conference.

“Don’t be mad at us, brother!” Beverley yelled according to SB Nation. “Way to be an icon, brother! Have a nice season, brother!”

After the game, Beverley took to Twitter to express his frustration about the game.

In the game itself, Dallas big man Andrew Bogut was called for a flagrant one for a foul on Harden during the second quarter. In the third, Dwight Powell of the Mavericks was flagged with a flagrant one after fouling Ryan Anderson. At the time of Powell’s foul, the Rockets had a commanding 22-point lead.

While those were the only two flagrant fouls, there were also eight technical fouls called. On top of that, Ariza was ejected at the start of the fourth quarter, and Carlisle was handed a technical after talking with Ariza earlier that day.

“I don’t know what they was on tonight,” Harden said. “That other team was trippin’ tonight, just disrespectful, unprofessional, players and coaches. I don’t know what was their problem, but I think that got us going. They wanted to throw a little cheap shot and just woke us up a little bit, and it was over from there.”

Harden continued: “Tough season or not, you don’t handle things that way. You don’t get flagrant fouls. That’s not professional. You don’t play basketball like that. You’re disrespecting the game of basketball. We’re going to leave it at that.”

It’s too bad these teams won’t play again this year despite the Rockets being good and the Mavericks being terrible. However, the two will play a lot more in the future, and if they continue to argue like this, maybe they’ll start the league’s next big rivalry.

By Alex Raskin Sports News Editor For Dailymail.com Not only are the NFL owners…

Source: The Guardian The Boston Celtics star Kyrie Irving has officially become a… 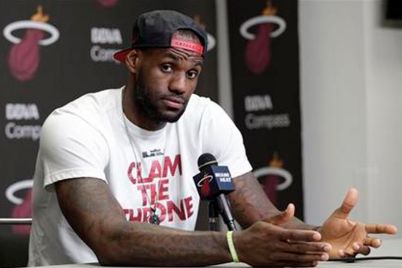