ST. PETERSBURG — Hundreds of proud parents, relatives and friends stood and cheered loudly as the Pinellas County Job Corps Center’s graduating Class of 2019 marched proudly to their seats in the center of the gymnasium last month.

The 92 seniors who walked to receive their diplomas and job certifications represented the more than 120 graduates for the 2018-19 school year. These young men and women represented the 10th Job Corps graduating class.

Job Corps Community Liaison Coordinator Corey Givens, Jr. spoke about the program’s long history of success with youth who struggled in traditional high schools for a multitude of reasons.

“Many of the students that come to us had difficulty adjusting to traditional high school due to problems in their surroundings,” said Givens.

Givens added that one of the students named Michael Mathis told him that he wanted to get away from Jacksonville because he “got tired of seeing young people die in his neighborhood and didn’t want to be another statistic.” Mathis will be entering the U.S. Air Force this month.

Ariana Rodrigues was another student who strutted proudly across the stage to receive her diploma. She and her family moved to Brandon from New Jersey after Hurricane Sandy, one of the worst east coast hurricanes in history, destroyed their community in 2012.

According to Givens, Rodrigues was emotionally traumatized by the experience. However, the young scholar eventually blossomed “like a butterfly” and went from being distracted to focused and completed her Career, Technical and Trade certification.

“The students are not just our trainees but our family,” said Givens.

Young adults who are accepted into Job Corps have many intrinsic benefits that help them focus on becoming productive citizens such as no-cost housing, books and supplies, childcare allotment, meals and more.

Dajah Davis shared her experiences on how Job Corps has impacted her life so far. Originally from Memphis, she arrived in St. Pete with a high school diploma but was not ready to take on college or the world of work.

“I was kinda into a depression,” said Davis, adding that the move to a new stated was traumatic.

When Davis began her career certification classes, she was fortunate enough to have a teacher who not only introduced students to book knowledge about business but who also took them on community field trips where students had the opportunity to observe how business is conducted in the real world.

It was not long before Davis realized that her inner calling was to become a leader. She substantiated that fact when she emerged from her depression, ran for president of the Student Government Association, and won.

In several ways, many of the student’s experiences mirror those of commencement speaker and elected official Wengay Newton, Sr. when he was growing up in south St. Pete.

“I held upon the same path that you are about to embark upon for an 18-month technical degree,” said Newton, Sr.

The State Representative of District 70 highlighted some demographic statistics that in one way or the other touched upon the lives of the students and families at the graduation.

“Single divorced female raising eight kids off government subsidies, food stamps, welfare, government cheese, free lunch, reduced lunch, summer jobs, afterschool jobs — you’re looking at it! But everything reminds me of everything that I am!”

Newton said he took full advantage of every opportunity that was given to him to help him realize his full potential.

To learn more about what Pinellas County Job Corps has to offer, log on to pinellascounty.jobcorps.gov.

It’s personal for me

Dear Editor, St. Petersburg is my home and has been all of my life. I’m proud to have… 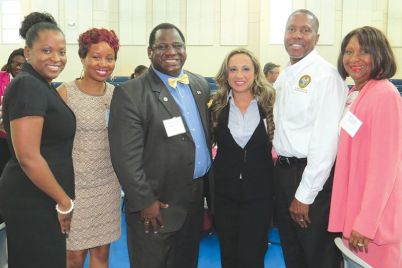 BY ALLEN A. BUCHANAN, Staff Writer ST. PETERSBURG — Despite the many attempts to break…