Last month, The Foundation for a Healthy St. Petersburg’s founding president and CEO, Randall Russell, joined Equity Now’s host Carl Lavender on WTMP radio to share how the foundation became, and continues to be, a leading stakeholder in the fight for equity in our region.

Lavender spoke to Russell about various subjects, including the recent murder of George Floyd and the country’s resulting protests, COVID-19, and FHSP’s Center for Health Equity.

Lavender began the interview requesting a refresher: “What is the Foundation for a Healthy St. Petersburg?” — for listeners unfamiliar with the foundation.

“When the foundation was formed, it was formed in a very unique and unusual way,” shared Russell. “There was no foundation on one day – and on the next day, there was a foundation worth about $150 million.”

The birth of the foundation came from the privatization of Bayfront Medical Center in 2013; IRS laws necessitated that proceeds from the sale resulted in the formation of a charitable foundation, which ultimately became the Foundation for a Healthy St. Petersburg.

Noting that a group of community leaders were given the challenge of where those resources were to go, Russell stated, “And from 2013 till now, we’ve been on a journey to figure that out.”

When he joined the organization as its first president in 2015, some things were obvious, he acknowledged – including knowing that improving population health was primary.

But noting that “some populations or subpopulations have different health outcomes than other populations,” Russell noted that data and lived experience found that people of color in our community had higher numbers of mortality and lower health outcomes.

“Foundations and philanthropy have a role in society — and the role of a philanthropic institution like ours is to hold the mirror up to the community and say ‘Is this really who we are and what we want?’ And when you ask the question ‘Why are some people’s lives valued more than others?’ you very quickly step into 400 years of discrimination in this country.”

These problems won’t be solved overnight, but Russell offered, the foundation challenged itself “to imagine what we could do that would be the best and highest use,” to the community.

For the foundation, creation of the Center for Health Equity offered a location where people from all backgrounds, sectors, and beliefs could gather to engage in this work. The foundation opened the Center as it launched a renewed commitment to race equity and relayed Russell, “the time could not be more prescient, to me, than now.”

With a 30-year career in social work before coming to the foundation, Russell shared that while dealing with racial equity often means leading while “making people uncomfortable,” it is vital to do it in a way that engages trust but is tenacious and relentless.

Russell says for him the question continues to be, “How can I use my privilege to insist that this is a white problem? And as a white man, that’s one of the things I have to focus on.”

Noting that humility, humbleness, and knowing that he “doesn’t know” – while setting up a structure where those who “do know” get heard — has been part of his goal, and “what is required.”

Regarding the current unrest and racial violence, Russell stated, “What we have to do is face the reality and truth of the situation and not pretend – and the truth of the situation is we have a president in the White House who supports white supremacy and their principles and beliefs. And that is the dark day for our country — and it’s scary.”

Russell added that the current climate made it ‘hard’ because healing from racism “should be done in kindness and love. But we’re in the middle of fear.” He acknowledged the work of protesters in helping us channel and control toxic levels of fear.

Lavender also asked about the foundation’s work during the COVID-19 pandemic, which continues to impact black and brown populations in numbers three times greater than those in white communities.

Russell shared foundation efforts with the Health Department and UNITE Pinellas to clarify rates of infection and establish policy change; on the ground disease mitigation including setting aside $3 million for nonprofit response, distributing masks, and contributing to the Tampa Bay Resiliency Fund; and supporting the work of One Community to support its #InThisTogether initiative for a suffering black business sector. 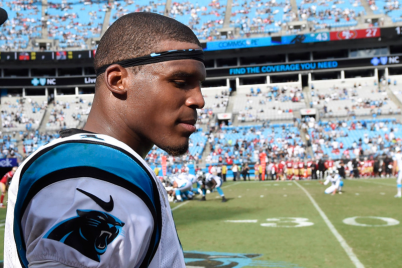 Cam Newton: We all need to be held accountable