An ongoing photo series tells the complex stories of LGBTQ Africans, encouraging the celebration of two identities too many believe are at odds with each other.

Queer Nigerian-American photographer Mikael Owunna created Limit(less) to debunk the myth that it’s “un-African” to be LGBTQ. The photographs also highlight queer African style, an essential point of self-expression for the community, according to Owunna.

For the past three years, Owunna has photographed 34 LGBTQ African immigrants for the project, most living in North America. The photos are paired with extensive interviews with each participant, exploring themes of homophobia, race, African identity, abuse, and healing.

“I focus specifically on the LGBTQ African diaspora because we can be visible in ways that many LGBTQ people currently living on the African continent cannot be,” Owunna writes on the project’s website.

Owunna says he started Limit(less) to create a space where LGBTQ African immigrants could celebrate their proud and complicated selves. He says being African and LGBTQ was something he struggled to reconcile when realizing his own queer identity, feeling tension between his sexuality and Nigerian heritage.

These are two identities that are always framed as antithesis to each other.

Owunna was outed at 15 years old, and was told by family that being gay was “not of [his] culture.” His family insisted queerness was a “white people” and “American” thing, not something organic to who Owunna was.

“My family started sending me back to Nigeria twice a year with the thought that by re-exposing me to Nigerian — and specifically Igbo — culture that this ‘gay thing’ would go away,” he says. “It didn’t, and eventually, I was put through a series of exorcisms in Nigeria at the age of 18.”

Owunna says the exorcisms led to severe trauma that caused him to feel like he could not be both gay and African. That belief, he eventually realized, wasn’t true. So he created Limit(less) not only to celebrate LGBTQ African identity, but also to reclaim and heal a part of himself in the process.

Over the past few years, Owunna has photographed and interviewed people like Wiilo Geedi for Limit(less). Geedi, who uses the pronouns they and them, was given the name “Wiilo” by Somalian elders when they were young. It means “girl who dresses like boy.”

Though the name’s meaning may seem offensive in an American context, Geedi says the initiative of their elders to name their experience has been crucial in understanding their identity.

“It’s something that has always comforted me when I was going through my process of discovering my queerness, and helped me to overcome the shame and the feeling of being pushed away from my culture,” Geedi says in their Limit(less) interview.

With every click of my camera, I work to envision what a free world can look like for black queer and trans people.

The portraits in Limit(less) are beautiful, vibrant depictions of the queer African diaspora. But Owunna has no formal photographic training — just a passion to document the complexity of his community.

One agender participant named Em, who uses the pronouns they and them, describes their experience participating in the portrait series as “liberating,” giving them the ability to confirm who they really are.

“These are two identities that are extremely important, but they are always framed as antithesis to each other,” Em says. “I get to be a living example with many others that they go together perfectly.”

African countries and communities often have a reputation of fostering rampant homophobia. Many regions in Africa, for example, have laws that punish the “crime” of homosexuality with death. But seeing African people as inherently homophobic, Owunna explains, doesn’t give enough attention to the full story.

“Homophobia is a recent import from European colonialism,” he says. “Africans have historically always been at the forefront of understanding of gender and sexuality, and our pre-colonial Indigenous understandings are so rich.”

One example of this history, Owunna says, is in the story of Nzinga of Ndongo and Matamba, a powerful and successful ruler in modern-day Angola in the 1600s. Nzinga’s title “ngola” meant “king,” and she dressed in men’s clothing as she ruled. She also had a harem of young men who dressed as women, who were her “wives.”

“So in 1600s Africa, you had a butch queen with a harem of drag queens leading a struggle against European colonialism. How badass is that?” he says. “But it proves this homophobia is what’s new, and we can and will get back to these rich understandings of gender and sexuality.”

Owunna is currently running a Kickstarter, raising $10,000 to take his project to Europe this fall, where he plans to photograph LGBTQ African immigrants in Belgium, France, Portugal, Sweden, and the UK. After this leg of the journey, he says, his almost four-year project to document the lives of LGBTQ Africans will be complete.

“The pictures are meant to be uplifting and emancipatory,” he says. “With every click of my camera, I work to envision what a free world can look like for black queer and trans people. We exist, and have always existed in African communities.” ■ 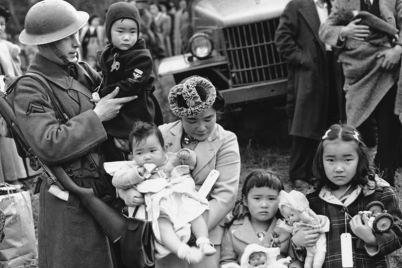 Why Japanese-Americans received reparations and African-Americans are still waiting

Rhoda E. Howard-Hassmann | The Conversation In June, the United States House of…