PETERSBURG – Publisher Lyn Johnson joined with the University of South Florida, the Poynter Institute and community members to celebrate the completion of the digital archive project Friday, Nov. 9.

Founded by Cleveland Johnson in 1967, The Weekly Challenger has been a vital source of news and information for Pinellas County for more than 50 years. In 2013, the Johnson family donated the physical archive of newspapers and some of its photographic resources to USF’s Poynter Memorial Library and agreed to include the newspaper’s entire historical collection in the library’s digital archive.

Then State Representative Darryl Rouson worked closely with USF to secure funding for the project during the 2016 legislative session, allowing the university to begin the digitization process. Two years of painstaking work later, the digital archive is now complete and available online at digital.usfsp.edu/challenger/.

The collection can also be accessed directly from The Challenger’s website by clicking “Archives” on the navigation bar.

Catherine Cardwell, dean of the Nelson Poynter Memorial Library, noted that nearly 5,000 items have been downloaded so far. While most have been accessed from educational sites, the paper has also been downloaded in six out of seven continents.

“When you look at the distribution, it’s everywhere. When you think of a small newspaper from St. Petersburg with distribution over six continents, it’s incredible,” Cardwell asserted.

Currently, the collection includes over 1,134 items, including newspapers and photos.  Readers can access and browse issues from the last 25 years, while current and future issues will be added within six months of publication.

USF’s Regional Chancellor Dr. Martin Tadlock acknowledged The Challenger’s importance in helping to continue and encourage community, stating that the archive is critical to the city of St. Petersburg and beyond.

“There’s nothing fake about the content of The Weekly Challenger,” he noted.

Rick Edmonds, Media Business Analyst at the Poynter Institute, noted the newspaper’s importance to the city’s past, present and future. Commenting on the difficulties of publishing news in a digital age, he acknowledged Lyn Johnson for her ongoing dedication to continuing to propel the newspaper’s visibility (including the recently revamped website).

Lyn Johnson began by thanking everyone who had anything to do the digitization process, but was modest about her own part in the project.

“I haven’t done much; in fact, I probably hindered the process by not getting the materials needed in fast enough,” she joked.

“My father tried to shield us from all the racism and the hatred that came along with owning an African-American newspaper,” noted Lyn Johnson. “A lot of things I didn’t know about, but during this process– speaking will all of his friends, reading a lot of the old back issues–I’ve learned so much more about my father, and much more about the community as a whole.”

She added that her father felt there was a need for the “real black story” to be told in Pinellas County, adding that marginalized communities run the risk of their stories being told in a derogatory of slanted way.

“There’s so much going on in this community every day that there’s no way we can cover all of it. But I strive to cover relevant issues and issues that in another 50 years people will be able to sit down and read in the archives at USF.”

Dr. Goliath Davis, who played a significant role in securing the project, spoke eloquently of the family of publishers and their historical importance.

“You see Lyn today with a dress and heels, but usually that’s not Lyn. You typically see Lyn with a camera, in jeans and a t-shirt, and she’s on the floor, and she’s crawling and taking pictures, she’s writing and doing those things.”

Davis related her role today to her father’s beginnings. “Fifty years ago, there was a man named Cleveland Johnson, and with his beautiful bride, Ethel, they had a dream. They had a dream, and that dream was to tell the story of a people in St. Pete from the real perspective.”

He applauded Cleveland Johnson for his uplifting vision: “He didn’t talk about crime; he talked about the values, the customs and the history and the legacy of the community and the people who resided in it.”

Today, calling Lyn Johnson, “the real keeper of the dream,” Davis praised her for her humility, tenacity, and vision, which guided the paper’s journey to being digitized at USF for the entire world to view.

“We’re national; we’re international. These are people from all around the world who now validate what Cleveland Johnson, his wife and his daughter tried to do because they’re reading the positive stories and positive contributions [of the community].”

Cardwell concluded by noting that they are still looking for issues to add the collection; most editions from the 60s, 70s and 80s kept in The Challenger’s original office were destroyed or water-damaged.

If you have issues from these decades to include in The Weekly Challenger digital archives, please contact the office at (727) 896-2922. Your materials will be scanned and returned to you. 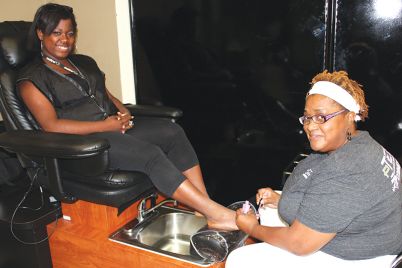 A case in point, when the family is engaged, children succeed! It is my pleasure to share…