In 2008, the whole world applauded the United States for electing its first African American president.  No part of the world was happier than the continent of Africa with its 54 nations. After all, this president was half Caucasian and half Kenyan.  He was a direct child of Africa, not just a descendent.  But to everyone’s surprise and disappointment, President Obama during his first four years showed very little love for his father’s homeland. In fact, when African heads of state (President/Prime Minister) would request a meeting with this new president, they were denied.  Even the First Lady of Kenya requested a short meeting with our First Lady and she was told in so many words, that will never happen.

As we visited various nations in Africa, we noticed that the disappointment started morphing into anger. We all thought that relations between Africa and our business entities would improve based on the person elected to lead the largest economy on earth.  No, it didn’t happen.  China, India, Pakistan, Turkey, etc. saw their relationships with African nations improving.  It is only natural that you love the one who loves you back. So, the billions of annual dollars that Africa trades with started to go at an increasing rate to nations other than America.

What really woke us up is when our Millennium Challenge Account awarded $800 million to Ghana to build a national highway. They named the highway the George W. Bush Highway in honor of the president who gave them the funding.  However, when it came to selecting a construction company for this project, they chose a Chinese firm at the request of the president of China. This underscores the anger in the leaders of Africa.

With the United States having an African American president, our business competitors picked up their game.  China kicked it off with an “African Summit.”  Their president invited every African president to come to its capital Beijing and receive heavy love.  They entertained them lavishly.  Even gave one big State dinner in the historical Great Hall.  They gave them $20 billion in financial aid with a promise of another $10 billion.  The president of China promised to provide financial loans for every major project they plan as long as a Chinese firm was performing the contract.

Next came Japan, which hosted its African Summit in Tokyo.  The Japanese president gave 15 minutes of personal time with each of the 46 participating heads of state.  The nation chipped in $30 billion in financial aid plus the funding of 10,000 internships for young African entrepreneurs and students.

India and the European Union had their African Summits also.  Even Russia is now getting into the “Love Africa Movement.”  They are providing financial aid and lending power to the continent.  They are leveraging this positive relationship to gain needed votes at the UN as they start attacking their neighboring nations.

Yes, everyone jumped into the game ahead of us.  We cannot get mad any time we hear of China, India or whoever else doing gigantic business with the richest continent, in terms of natural resources, on earth.  They worked it and deserve it at this point.  We have been so stupid.  It is a major embarrassment and it is hurting our international trade.

Evidently, as President Obama reflects on his legacy, he has decided to do something — even if it is token.  If he needs to make up for lost opportunities, he had better do something fabulous.  However, that doesn’t seem to be the case.  Finally, he has called for an African Summit – August 4 – 6.  All of us leaped in joy but as the itinerary is being formed, there seems to be a lot missing.

As opposed to the summits of our competitors, no African head of state will receive a one-on-one with our president. They will be herded into a room for some “interactive dialogue.”  What?  They are supposed to come all the way over here for a lecture?  The Senate will hold some meetings with them.  Cabinet secretaries have been instructed to have some meetings with the contingent.  This is insulting.  A president is supposed to meet with the other presidents.  A cabinet secretary is a subordinate to a president.

The next event has me scratching my head.  They are going to, at last, have a state dinner.  But it won’t be in the formal White House.  No, these African presidents will be escorted to the lawn of the White House.  Where’s the love?  They can’t even sit on the White House furniture and eat with exquisite china and such.  No, it’s the lawn for these Black politicians.

Finally, I see no item in the itinerary that will afford them a meeting with our Congressional Black Caucus.  That seems eerie.  Our competitors must be laughing.  African presidents are not laughing. 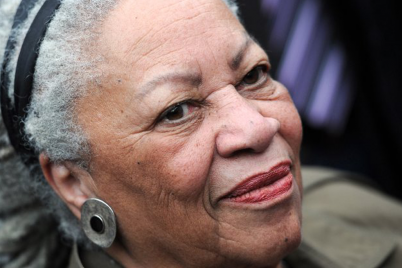 By Zeba Blay, Huffington Post Toni Morrison has written a powerful essay in the…