ST. PETERSBURG – On a dark and stormy night (Dec. 14) Dana Battle and Terri Lipsey Scott followed behind their husbands who were driving a U-Haul truck to the Panama City. Not knowing exactly how to get there—you know men refuse to stop and ask for directions–the four braved horrid conditions to deliver their cargo.

What was the cargo you ask? Well, you should know because you donated it. That’s right. The community gave more than 1,000 toys to the Woodson Toy Drive for local children in need and also for those suffering in the Panhandle from the effects of Hurricane Michael.

The folks at the Carter G. Woodson African American History Museum asked the community to bring out the dolls, balls, bikes and books, and you responded.

“We can’t thank the community enough for the outpouring of support particularly after many of them came to learn that our contributions were going to benefit those who have been impacted by Hurricane Michael, said Executive Director Scott.

Not only were toys delivered to the relief drive held by their local NAACP in Panama City, but also backpacks and sleeping bags.

The Woodson started their annual toy drive in 2009, and every year they host a party thanking those who have donated and those dropping off gifts, and this year was no different. Saturday, Dec. 8, the museum was packed full of people dropping toys off and giving Santa (Donald Dowridge, Jr.) their wish list.

“It’s one of the biggest events that we’ve hosted to date,” said Scott. “Folks look forward to it annually; they start bringing in dolls and balls as early as Aug. We are just happy to be a part of such a generously giving community.”

Two such generous givers were Monica Gross and Debbie Canning, who are carrying on the tradition of donating two bicycles each year started by Monica’s husband, Andrew Gross. Andrew was killed just a few months after donating the first two bikes, so Monica and Debbie continue to give in his memory.

The toys that weren’t taken to the Panhandle were donated to the Christmas Toy Shop, the Ronald McDonald House and the St. Pete Police Victim Assistance.

By far the largest donation of the evening came from Lorna Taylor, president and CEO of Premier Eye Care. She generously donated $25,000 to the museum

The Woodson is the only museum in town that does not charge an admission fee. Scott said because they never want the residents of Jordan Park to feel like they are isolated from any programming held there.

“They gave up their community center in order for us to have a space that we’re calling a museum.”

She also feels it’s misleading to think that it is a gallery since they cannot maintain fine art and exhibits there because of the lack of climate control.

“We are a community center with door and boarded up windows,” she said.

But these conditions do not stop the community from showing up to events, and it doesn’t stop them donating their time and money.

“Whatever wonderful gifts we get it’s a result of people recognizing our honorable deeds and their willingness to give.”

With holiday treats galore and beautifully decorated trees by board chair Battle, the Woodson was transformed into a Christmas Wonderland with excited children chomping at the bit to get face time with Santa. 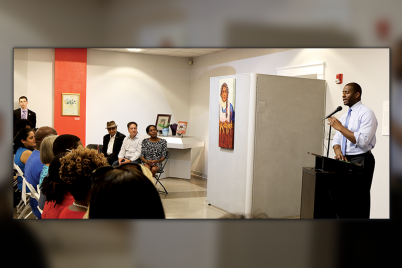 Andrew Gillum shares his gubernatorial vision at the Woodson Museum 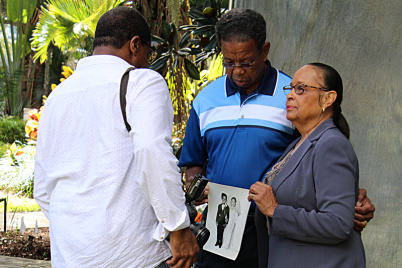 Photos courtesy of Essex Potts & Emma Collins. A collaboration between the African… 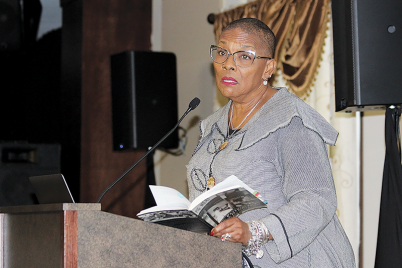