“I’ve been writing since I was very little, around preschool,” Davon said. “I would always become fascinated by the characters I saw on television that I would want to draw and write stories based on them.”

Now at 17, Davon has written and illustrated a series of children’s books about Mr. Tickety-Toc Clock, a red-twin belled clock who always shows up just in time to teach kids about everything from the importance of a good night’s sleep to learning how to read.

Davon said finding a topic was easy. He found inspiration in the clock on the wall at school.

“From there, the demographics of writing for children just kind of stuck with me over the years,” he said.

So far, Davon has written four books about Mr. Tickety-Toc Clock with rave reviews.  The books can be purchased at the Great Explorations Children’s Museum as well as online at Barnes and Nobles or Amazon.

Online reviews describe the series as a “delightful book with enchanting characters.” One reviewer said, “We can’t wait to see what else he writes because we are big fans!”

Davon, a senior at Lakewood High School, said readers have nothing to worry about because writing is truly a passion and he is definitely planning more children’s’ books.

“I like to write because it gives me the freedom to imagine anything I can,” he said. “My imagination is able to run wild, and I can create new and fun worlds that have never been thought of before.”

Davon’s mother, Sandra Miller, said she and her husband couldn’t help but beam with pride when they hear people talk about their son’s work.

“We are very proud of him,” Miller gushed. “How many parents can say that they have a child that is a published author?”

Miller said she is especially proud of her son, considering he never gave up on his passion for writing, even while battling severe asthma at a very young age.

Now, as a successful author with a fan base, he likes to give back when he can. Davon is partnering with John Hopkins All Children’s Hospital by hosting a fundraiser for their asthma program.

On Saturday, Aug. 24, from 11 a.m. until midnight, Davon is asking the community to visit Chili’s at Parkside Mall, 7520 US Highway 19 N. Pinellas Park. The restaurant will donate 20 percent of each patron’s check to the hospital and the asthma program.

His mother says his desire to give back is just a part of who he is.

“He is a Christian young man following in Christ’s footsteps,” she asserted. “He also volunteers at the South Branch Library and the Ronald McDonald House.”

Davon is a member of the National Honor Society with plans to attend college and pursue a career in voiceover work, and of course, give children more adventures with Mr. Tickety-Toc Clock. 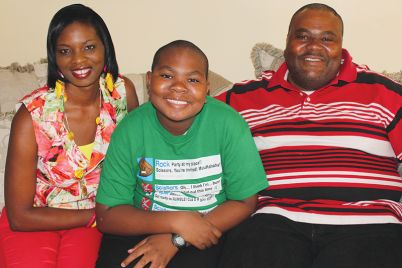 BY HOLLY KESTENIS, Staff Writer ST. PETERSBURG – Davon Miller has loved to write for as…