I’m not in my 40s quite yet, but as I quickly approach the next decade (a bit faster than I want), I’ve been thinking about what important financial decisions will need to be made in the coming years. For many Americans, our 40s can be a time where earning potential is very high, but it’s also an important time to make sure the proper retirement moves are being made.

Personal finance information is often just that — personal — in the sense that not everything is applicable to your specific financial situation. But here are two key ideas that you should be following in your 40s to help you transition into the next stage of life. 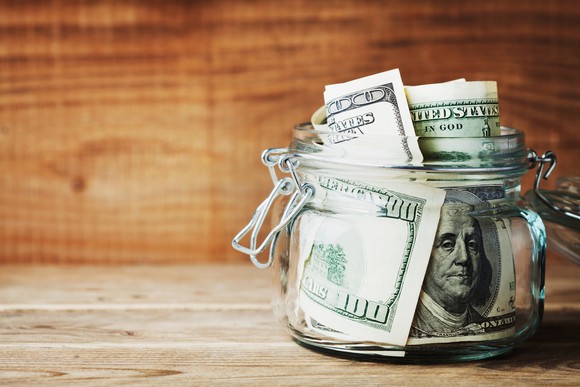 To help give you an idea where other Americans are with their retirement, take a look at the chart below. It’s from the Economic Policy Institute (EPI) and it shows the median retirement amount for Americans between 1989 and 2013 (which is the latest data available). 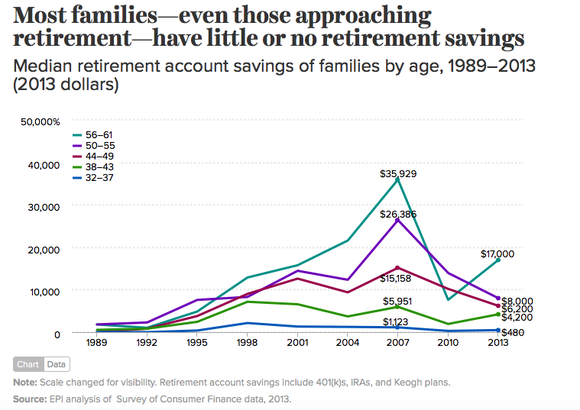 The red line shows that Americans between ages 44 and 49 had a median retirement account savings of just $6,200 in 2013. News flash: That’s not good. And according to EPI, “For most age groups, median account balances in 2013 were less than half their pre-recession peak and lower than at the start of the new millennium.”

Maybe your retirement is all set to go and you’ve been socking away money for decades. But this set of data suggests that’s probably not the case. Which means that right now (like literally, when you finish this article) you need to set up a plan for putting more money away for retirement. You can do this through an employer-provided 401(k) or by setting up your own individual retirement account (IRA). The important part is to start now, if you haven’t already, and continue increasing your contributions to the account if you’re able.

2. Kick debt to the curb

Similarly, PayScale says that college-educated Americans see their pay growth peak at 49 for men and 40 for women.

One of the best ways to make good use of this income is to pay off your debts, if you still have them. The average 35 to 44 year-old American has $8,235 in credit card debt, and the average 45 to 54 year-old has $9,096, according to a report by ValuePenguin.

The one caveat to this is student loans. It may be best to not pay your student loans off earlydepending on how much you owe, what your interest rate is, and what type of repayment plan you’re currently on.

But in general, you should be using this time — when you’re statistically making some of the most money you’ll ever make in your career — to pay off debts and put yourself in a better financial position. Don’t increase your lifestyle just because you’re bringing in more cash, but rather live below your means and kiss your debt goodbye.

Don’t overlook these because they’re obvious

It’s easy to gloss over these two suggestions because they’re obvious moves that nearly everyone should be making. But judging by the amount of credit card debt most Americans have and the low balances we’re keeping in our retirement accounts it probably means that we need this simple advice just as much as ever.

Billionaire investor, Warren Buffett, once said, “Someone’s sitting in the shade today because someone planted a tree a long time ago.”

This sentiment can easily be applied to how you should do your financial planning in your 40s, as you look ahead to retirement. Do this hard work of paying down debt and adding more to your retirement savings now, so you can enjoy the shade later.

If you’re like most Americans, you’re a few years (or more) behind on your retirement savings. But a handful of little-known “Social Security secrets” could help ensure a boost in your retirement income. For example: one easy trick could pay you as much as $16,122 more… each year! Once you learn how to maximize your Social Security benefits, we think you could retire confidently with the peace of mind we’re all after. 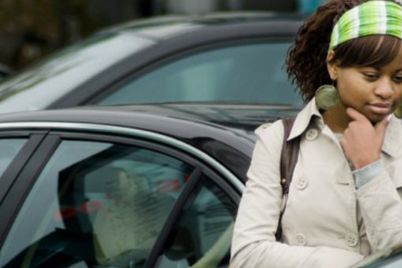 Auto financing: Don’t let your car loan drag you under

Sean Pyles, NerdWallet | USA Today Is your car burning up your paycheck? You’re not…

Here’s how you can build your credit score

By Sarah Shemkus | Boston Globe You need to buy a car and finance it with a loan. But the… 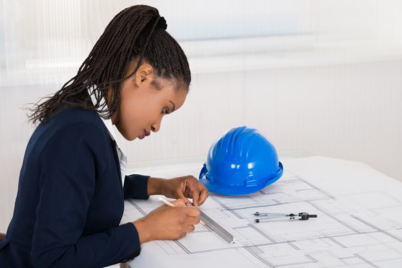