Turning the calendar to a new year inspires many people adopt a healthier diet, often by attempting a 180 on their eating habits. But those intentions fail more often than not.

“People set unrealistic goals and attempt to make wholesale changes,” says Lesley Lutes, Ph.D., associate professor of psychology at the University of British Columbia. “That all-or-nothing behavior becomes overwhelming, leaves you feeling deprived, and sets you up for failure.”

That’s exactly why we’re advocating a more realistic approach: Try just a few minor tweaks. That makes the changes doable, not daunting, and you will see improvements in your health.

“You have so many diet choices to make every day, so even if you make a change only some of the time, the benefits add up,” Lutes says.

A new study by researchers at the University of South Australia supports that strategy. They found that replacing just 25 percent of discretionary foods (such as dessert, snacks, and sugary beverages) with healthy foods resulted in a huge improvement in overall diet quality—reducing sugars intake by almost 21 percent and calories by almost 4 percent, and increasing protein intake by about 2 percent.That means that something as simple as trading a few cookies for a piece of fruit can make a big difference in helping you follow a healthier diet.

Here are six strategies you can use to build your own personalized small-changes diet:

A 2016 study from Baylor University’s Hankamer School of Business found that even people with little self-control can set themselves up for healthy-eating success if they switch their attention from what the researchers called “avoidance” foods to “approach” foods. Don’t try to force feed yourself something healthy that you hate (such as kale) in place of something unhealthy you love (cake).

“Seek out yummy healthy foods—such as strawberries—and you might find that after enjoying a big bowl of fresh berries you no longer want that chocolate cake,” says Meredith David, Ph.D., lead author of the study.

Replace One Sugary Drink per Day with Water

We all know that soda isn’t the healthiest beverage choice, but a recent study suggests that exchanging one serving per day for a glass of water could help reduce overall calorie intake and subsequent risk of obesity, lowering your risk of developing type 2 diabetes by 14 to 25 percent. Take a look at your fruit juice intake, too. Even 100 percent fruit juices can contribute a lot of calories and sugars to your diet. Limit yourself to one 4-ounce glass per day.

If you’re not eating enough vegetables (and most of us aren’t), it could be because you put them in a contest they can’t win.

“Research has shown that when vegetables are competing with other—possibly more appealing—items on your plate, you eat less of them,” explains Traci Mann, Ph.D., assistant professor of psychology at the University of Minnesota and author of “Secrets From the Eating Lab” (HarperCollins, 2015). “But when you get the vegetables alone, you eat more of them.”

Mann has studied this strategy—serving veggies solo before the rest of the meal—with college students and preschoolers, but she reasons that it would work for anyone.

“Make a salad and sit down to eat it before you put any other food on the table,” she suggests. “You’ll not only eat more vegetables, you’ll also fill up a bit so that you eat less later in the meal.”

Go Meatless One Day per Week

A 2016 study published in JAMA Internal Medicine found that replacing animal protein with an equivalent amount of plant protein was associated with a lower risk of mortality—especially from heart disease. So swap your burger for a veggie version or make a bean chili so hearty that no one will miss the meat.

You don’t need to give up your favorite sweets, but you can eat less and enjoy a snack just as much. A study by Cornell University’s Food and Brand Lab found that if you eat just a quarter of your usual amount (just two Hershey’s Kisses, for example, instead of eight), then do something distracting for 15 minutes (return a phone call or take a walk), you’ll feel just as full and satisfied as if you’d eaten the full amount.

When you’re in a bad mood you might be more inclined to eat unhealthy foods. But a recent study found that improving your mood even slightly may lead to healthier eating. How to do it?

“Right before they served themselves a meal, we asked people to think of one positive thing that had happened that day that they were grateful for,” says Brian Wansink, Ph.D., director of Cornell’s Food and Brand Lab and author of “Slim by Design” (William Morrow, 2014). “Those who did ate 9 percent fewer calories at that meal and chose a healthier mix of foods that included more vegetables and fewer processed carbs.”

Editor’s Note: This article orginally appeared in the January, 2017 issue of Consumer Reports On Health. 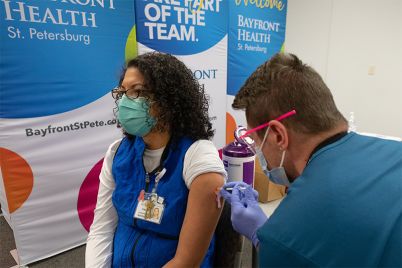 20 Foods that will nourish your brain: Eat to beat dementia

These Are the Real Health Benefits of Apple Cider Vinegar

CYNTHIA SASS, MPH, RD | Health.com Apple cider vinegar has been touted as a cure-all for…