Faith, community and political leaders gathered at the historic Ebenezer Baptist Church in Atlanta and other events across the country to celebrate the legacy of the Reverend Martin Luther King Jr. 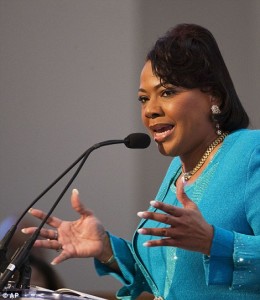 Calling the gathered crowd to remember her father’s legacy, the Rev. Bernice King urged people to remember his message of nonviolence. King’s sister, Christine King Farris, presided over the service.

Gwendolyn Boyd, president of Alabama State University, was to give the keynote address. David Oyelowo, who played King in the movie ‘Selma,’ also paid tribute. He got choked up as he talked about putting himself in King’s place.

He explained that he, like King, has four children and said he cannot imagine walking through life knowing there are people who wanted to take their lives or that of his wife.
Also present and slated to speak at the service were civil rights leader U.S. Rep. John Lewis, U.S. Sen. Johnny Isakson and Atlanta Mayor Kasim Reed.

‘I cannot help but remember many women and men who have been gunned down, not by a bad police force but by some bad actors in a police force,’ she said.

She called on those who came to celebrate her father’s legacy to act out against injustice but also to remember his message of nonviolence.

‘We cannot act unless we understand what Dr. King taught us. He taught us that we still have a choice to make: nonviolent coexistence or violent co-annihilation. I challenge you to work with us as we help this nation choose nonviolence,’ Bernice King said.

U.S. Rep. John Lewis, who told the crowd he was just 17 when King sent him a bus ticket to come to Montgomery to join the civil rights movement, recalled the man he called his hero and his leader, a man who is ‘still a guiding light in my life’. 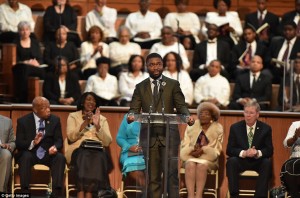 ‘The memory of such a great man can never, ever fade,’ Lewis said. ‘I still think about him almost every day.’

Tributes to civil rights leader Dr King Jr were held around the U.S. on Monday as protests over the treatment of minorities by law enforcement rolled on across the country.

Observers of Martin Luther King Jr. Day have this year linked the federal holiday to a rallying cry in recent months during demonstrations over police brutality: ‘Black lives matter.’

In a pre-dawn rally in Oakland, California on Monday, about 40 people converged on the home of Mayor Libby Schaaf, calling for harsher punishment of police who use violence against civilians.

They chalked outlines of bodies on the tree-lined street, played recordings of King’s speeches and projected an image of the slain civil rights leader with the words ‘Black lives matter,’ on the mayor’s garage door.

Other protests were planned in major cities such as Dallas and New York, where the family of Eric Garner, who died after being placed in a police chokehold, was set to lay a wreath on the Brooklyn street where two uniformed officers were ambushed in December by a gunman claiming to avenge Garner’s death.

Across the country in northern California, tickets sold out for the final run on Monday of the Freedom Train, the last of the more than two dozen official train services launched 30 years ago by Coretta Scott King in honor of her husband, according to the Dr. Martin Luther King, Jr Association of Santa Clara Valley.

The President, wife Michelle and daughter Malia traveled to a District of Columbia site for the Boys and Girls Clubs of Greater Washington where they helped paint murals and assemble ‘literacy kits’ made up of flashcards and books intended to help the center’s young kids improve their reading and writing skills.

The family was joined by Wendy Spencer, CEO of the Corporation for National and Community Service. Sasha Obama was not with her family.

In a proclamation issued last week, Obama said the U.S. has made ‘undeniable progress’ since King agitated for justice and equality for all.

But Obama said securing the gains requires ‘constant vigilance, not complacency’ and he called on all Americans to stand together for good jobs, fair wages, safe neighborhoods and quality education.

Much of Obama’s Cabinet fanned out across the country Monday to participate in community service projects and events in remembrance of the slain civil rights leader.

Biden devoted his 27-minute speech to the tension between police and minorities in some communities around the country following the deaths of two unarmed black men in encounters with white officers in Missouri and New York City this summer.

The incidents touched off protests and a national debate over police conduct. Tensions escalated after two New York City police officers were fatally shot last month by a man who suggested in online posts that he was retaliating for the deaths of Michael Brown in Ferguson, Missouri, and Eric Garner in New York. The gunman, who was black, committed suicide.

‘Men often hate each other because they fear each other,’ Biden said, quoting King.

‘We have to bridge that separation … particularly today between police and the community that exists in some places.’

Biden did not mention a weekend incident in which several gunshots were fired from a vehicle speeding by the driveway of his Delaware home. Biden and his wife were not home at the time, and there were no reports of injuries.

Police continue to investigate the incident, which prompted the Secret Service to boost security at Biden’s home.

‘It really is good to be home,’ said Biden, who left immediately after speaking to a crowd of about 200 people in a half-filled ballroom on Wilmington’s riverfront.

Biden’s speech came just days after a rally in support of police drew about 300 people to downtown Wilmington. Even as the rally was being held, police were involved in a shooting that left a man in critical condition.

Authorities said an officer returned fire after the man shot at police following a traffic stop. Police have released few details about Thursday’s shooting, including the race of the officers and the occupants of the vehicle.

‘Cops have a right to go home at night to see their families,’ Biden said. ‘All minorities, no matter what the neighborhood, have the right to be treated with respect, and with dignity.’