On an especially fine Wednesday night in the NBA, Stephen Curry honored his father and Kobe Bryant bade a gallant farewell to the nation’s capital. The box scores revealed big, exciting nights for both players, delivering what the people wanted to see.

What a shallow tale they tell. As Bryant staggers to the finish line, revealing only flickers of his greatness, Curry is changing how the NBA game is played — and doing it within the privacy of the Warriors’ unstoppable attack.

Bryant was once that iridescent figure, a player of such all-encompassing ability, the comparisons to Michael Jordan weren’t so terribly far off. Bryant could crush teams on the scoreboard and destroy their will, just as Curry has done during the Warriors’ 20-0 start. But like ships passing in the night, these two men have little connection.

A torch is being passed, as we speak. The game’s greatest pure scorer sees his successor in clear view. Not to discount LeBron James or anyone else, but in Jordan’s wake, Bryant came to represent the NBA’s otherworldly. He scored 81 points one night, had four nights in the 60s, racked up three straight games with at least 50. Lakers teammate Robert Horry summed up the league’s reaction after Kobe dropped 56 on Memphis in 2002, saying, “Words can’t describe what that cat did tonight.”

That’s pretty close to what people in Charlotte were saying Wednesday night when Curry poured in 28 points in the third quarter and sat out the fourth with 40. “I’ve never seen a player like him in all my years in the NBA,” Warriors broadcaster Jim Barnett said on the air. “He is going to spawn a new generation of shooters. They’re going to break down the analytics, go frame-by-frame with the video, and kids who are now 10, 11, 12 years old are going to start trying to emulate him. It’s something that is revolutionary.”

Kobe didn’t start a revolution; he merely carried on the great Jordan tradition, at the time believed to be impossible. Curry is entirely something new, and Barnett’s “frame by frame” comment cut to the heart. There are times when Curry’s dribbling virtuosity — behind the back, between the legs, standard crossover, both hands — must be viewed in slow motion, multiple times, to be comprehended.

Perhaps Pete Maravich handled the ball that well, decades ago. The Harlem Globetrotters have unveiled several astonishing ballhandlers over the years. Add Curry’s quick release, deadly accuracy and the ability to create his shot at any spot on the floor, and … yes, that’s a revolution.

It might be a while before anyone falls in line, and here’s the biggest reason: Curry displays the strongest, softest, more reliable off-hand in the game’s history. Right-handed kids (seasoned pros, for that matter) could work on the adjustment for years without coming close to Curry’s left. Neither Jordan nor Bryant could fathom such a thing. Larry Bird and Isiah Thomas had that off-hand brilliance, but no — not like this.

A lot of teams, notably the Houston Rockets, have parlayed advanced analytics into an on-court approach built around dunks and three-pointers. In that sense, the Warriors’ long-range onslaught is nothing new, but it took an NBA championship, with Curry leading the way, to overwhelm the skeptics. People now wonder if there’s any room left in the NBA for post-up centers, mid-range shooters, big-man frontcourts or anything that characterized the league in Jordan’s time.

On top of it all, Curry is just about the nicest, most down-to-earth superstar anyone can remember in any sport. And the two ships quietly pass. Bryant, radically self-obsessed to the point of having precious few friends, has been a fierce-minded loner since the age of 8, when his father’s career took him from Europe to Philadelphia and Kobe was, in his words, “a little Italian kid.”

If you ever heard of an NBA player working especially hard to recover from injury, chances are that Kobe worked twice as hard — but his determination has cost the Lakers dearly. His career essentially ended in a game against the Warriors at Staples Center in April 2013, when he went down with a ruptured Achilles tendon, but he refused to acknowledge it.

Since then, it’s been nothing but bad news: long recovery, knee injury, recovery, shoulder surgery and recovery, not to mention the franchise-suffocating burden of his two-year, $48.5 million contract. Blinded by Kobe’s ticket-selling appeal, the Lakers have enabled him at every turn. But why would any elite free agent go anywhere near this team with a sadly depleted roster and Bryant — whenever he could get on the court — demanding the ball for yet another contested three-point shot in isolation?

“It’s been painful for me to watch him,” Jerry West told Reuters. “It bothers me. A lot of people will remember him for how he’s playing now. I won’t.”

To watch Kobe now is to witness free throws clanking off the front rim and the dreadful procession of three-point shots only rarely hitting the mark (22 percent). There’s nothing noble about the spectacle, and it came as a relief to everyone when he surrendered to reality and announced his retirement.

Suddenly, there is clarity. He speaks eloquently, as he always did, about then and now. He’ll have his nights, like the 31-point effort against Washington. People can catch a final glimpse, and if they’ve been around, they’ll remember how savagely he dunked on people, how he owned the mid-range game, how his textbook fundamentals gave him such a decisive edge, how he closed games with the fury of an electrical storm, and how he knewhe was the best, openly savoring every conquest.

It was all so wonderful back then. These days, people might watch Kobe but they will watch the Warriors. They wouldn’t dare turn away. Nothing stirs the soul like revolution. 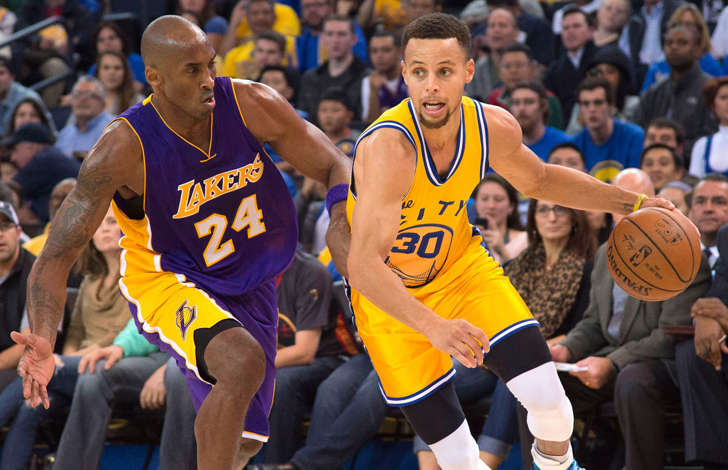