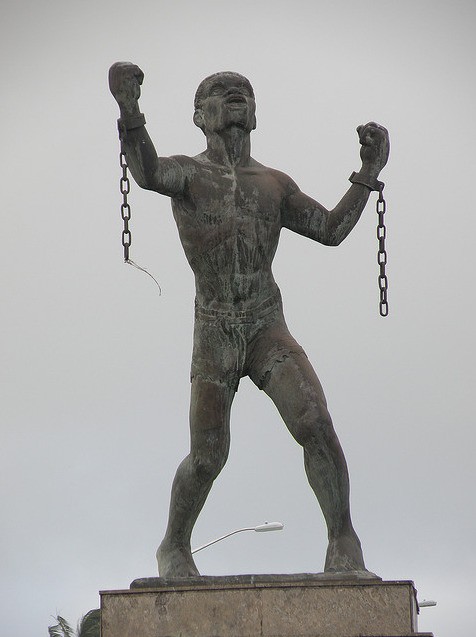 This July, I traveled to Barbados to unwind and get away. I didn’t know I’d encounter a monument that would help me understand how America processes our history.

Heading into town from the airport, we circled a statue situated in one of the most prominent intersections in town. It depicts a black man, Bussa, breaking the chains that bound his hands in slavery. In 1816, Bussa, an enslaved African, organized enslaved black people across every major plantation to stage a nationwide revolt in what is now known as Bussa’s Rebellion. His actions were instrumental in bringing about the abolition of slavery in the British West Indies.

As someone who grew up in Florida, I had never seen anything like it. For me, a racial justice activist, it communicated viscerally what no study or analysis ever could. It helped me imagine a landscape of liberation.

That night, I tweeted an image of the statue. People began tweeting back pictures of others just like it. Statues in Brazil, Guyana, Suriname, Colombia, Jamaica, Saint Martin, Haiti, Mexico, Cuba, the Dominican Republic, and Curaçao — all of black men and women who organized, fought, and risked their lives for emancipation. Free. Fearless. Empowering by design.

These statues represented a reality I did not experience growing up. The monuments in my hometown celebrated the men who fought to keep those who look like me enslaved, not those who fought for freedom. A monument in downtown Orlando where I grew up depicted a Confederate soldier, rifle over his shoulder and towering above his surroundings. At its base was a plaque celebrating the “heroic courage” and “unselfish patriotism” of their cause. A few miles down the road, children spent their days learning in the classrooms of Robert E. Lee Middle School.

More than 700 monuments to these white supremacists dot the landscape of the United States — not just across the South. There’s a Confederate Memorial Fountainin Montana, Jefferson Davis Park in Washington state, and Stonewall Jackson Drive located on an Army base in Brooklyn. These are symbols designed to empower hateful ideology and disempower those who continue to be oppressed by it. As we saw last week in Charlottesville, they have become rallying points for today’s white supremacists.

When I was growing up, the Confederate statue seemed to blend into the landscape of the city. It loomed over us as we walked to recess in middle school. But it wasn’t until I was older that I began to comprehend its significance. I’ll never forget the anger I felt reading the words it used to describe the Confederates. “Heroic courage.” “Unselfish patriotism.”

These monuments are not benign markers of “Southern heritage.” They unequivocally celebrate a tradition of white supremacy. Look no further than Alexander Stephens, vice president of the Confederacy, who declared the Confederacy to be founded “upon the great truth that the negro is not equal to the white man; that slavery, subordination to the superior race, is his natural and normal condition.”

The reason these statues were built has its roots in oppression. Most of these monuments were constructed in the early 1900s as the South was imposing Jim Crow segregation and racial terrorism on black communities. In fact, many were a direct reaction to the perceived threat of racial progress, as with the surge in schools being named after Confederates following the Brown v. Board of Education decision on school integration.

This concerted effort to resurrect the symbolism of the Confederacy so long after losing the war is without precedent. For instance, there are no statues of Hitler in Germany today. Swastikas and other Nazi emblems are banned throughout the country. Rather, the German government has chosen to shut down symbols of its nation’s history of hate and devote resources to commemorate the people who were victimized.

WHERE ARE THE STATUES DEPICTING BLACK LIBERATION?

In 1739, an enslaved Central African man named Jemmy led the Stono Rebellion — the largest slave uprising in colonial American history. Starting in South Carolina, Jemmy recruited, organized, and armed up to 100 freedom fighters. Together, they marched toward refuge in Florida carrying banners and chanting, “Liberty!” — “lukango” in their native language Kikongo. They burned six plantations and fought off white militias for a week before the rebellion was ended. Jemmy was killed, but some of his followers are thought to have made it to Florida.

Today there is a lone sign propped up amid the grassy fields of South Carolina to bear witness to the Stono Rebellion. It does not mention Jemmy by name. Why are there so many monuments in America celebrating traitors like Jefferson Davis and so few celebrating heroes like Harriet Tubman, Nat Turner, and Jemmy? Even the US Capitol has at least three times as many statues of Confederate figures as it does of black people. Confederate statues celebrate racism, but the ideology of white supremacy not only venerates oppressors — it also erases the stories and sacrifices of those who dared to resist.

It erases the stories of enslaved black people who, despite the most oppressive circumstances, managed to lead as many as 313 rebellions. It tells us that Lincoln signed the Emancipation Proclamation, but not that 200,000 black soldiers — many formerly enslaved — fought to make emancipation a reality. This erasure robs us of a rich legacy of resistance to draw upon when confronting the oppression of today.

THESE STATUES MUST BE TAKEN DOWN

It doesn’t have to be this way. Following persistent pressure from local activists, that statue in Orlando was relocated and Robert E. Lee Middle School renamed. This week, officials in Charlottesville, Louisville, and Baltimore began to remove those cities’ Confederate statues. In Durham, students tore down a Confederate statue whose odious presence in front of the courthouse could not be endured any longer. Progress is being made.

Yes, each Confederate statue should be removed, each Confederate school and street renamed. But the fact that the national debate still centers on whether pro-slavery monuments should be taken down, not on how many anti-racist monuments should be built, speaks volumes. Why isn’t the idea of building statues like Bussa’s being considered prominently in this national conversation? Why does it seem so hard for this nation to imagine a world where black freedom fighters are celebrated instead of their oppressors?

At a time when white supremacists pose a growing threat, local leaders, artists, and activists should work together to build symbols that unequivocally reject this hateful ideology: monuments that give voice to the truths unheard, celebrate the heroes untaught, and inspire the next generation to join the necessary work of perfecting our union. We deserve to look up to freedom fighters like Bussa, not continue to be looked down upon by our history’s cruelest oppressors.

We deserve more statues that depict our liberation.

Samuel Sinyangwe is an activist and data scientist who co-founded Campaign Zero, a policy platform focused on ending racism and police violence in America.

As A Howard Alum, I Stand With Upset HBCU Students Everywhere