The elite Georgetown Visitation Preparatory School in Washington, D.C., has had to face an ugly side of its past after research revealed that the founding nuns of the school didn’t teach slaves to read, as the legend goes – the nuns actually sold slaves.

It was the 1820s and debt was piling up for Mother Agnes Brent, the superior of the Georgetown Visitation Convent in Washington. The convent had broken ground on a new chapel. To fund the chapel’s construction, Brent needed money, and it came: relatives of two nuns had four spare slaves, two adults and two children, and offered them as a “gift” to Georgetown Visitation to sell.

This is just one instance that was found and documented in a report compiled by a Georgetown Visitation Preparatory School archivist and historian. These revelations have rocked the school, one of the oldest Roman Catholic girls’ educational institutions in the nation and destroyed its rosy self-image. 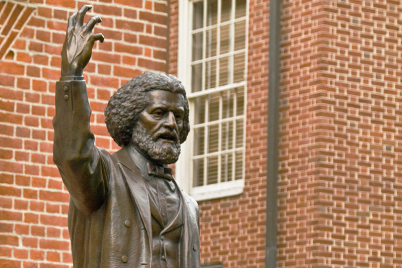 Frederick Douglass and the Periodization of Reconstruction

By Eric Metaxas, TIME In 1934, an African American pastor from Georgia made the trip…

By Meserette Kentake, Kentake Page “I Always Wanted to Be Somebody.” Althea Gibson…