Facing a decade and a half in prison couldn’t stop her. Losing a loved one to suicide didn’t destroy her. Battling loss and pain while raising three children was not enough to make her quit.

“Black Girl Magic” is a beautiful phrase. It summons up the image of some supernatural divination that has been arbitrarily gifted to darker women. It reminds the world that there is something mythical and special about black women. It aptly captures the indescribable grace, beauty and strength that black women display every day.

There is no such thing as magic.

Black women’s superpowers did not fall from the stars. Their iron wills are stronger because they have been strengthened by a heat that most could not endure. Attributing their combination of delicate beauty, unwavering perseverance and unparalleled love to something metaphysical or celestial diminishes the unrelenting grip that has held black families together for 500 years.

Magic would have run out a long time ago. Magic isn’t strong enough to keep smiling after its son is gunned down in Ferguson, Mo., or Sanford, Fla. Magic can’t make macaroni and cheese while studying for a master’s degree. Magic would have moved to the back of the bus in Montgomery, Ala. Magic would have been too afraid to tiptoe past fugitive slave hunters on the Underground Railroad. Magic wishes it were as strong as a black woman.

Although we may never find out what specific otherworldly ingredient makes up black women, we can witness it every day. If you are unfortunate enough never to have seen it, meet Eccentrich Richardson.

Eccentrich Richardson is a poet, writer and cultural-arts programmer in Pompano Beach, Fla., who somehow finds the time to save the world in her spare time. Her “Free on the Inside” program goes inside Florida’s toughest prisons and helps inmates find beauty, power and, hopefully, themselves.

Free on the Inside works with Level 5 prisoners—the most-secured prisoners who are often incarcerated for the harshest crimes. Richardson explained that the program is transitioning toward focusing on 25 inmates in each facility who want to use writing and poetry as a therapeutic outlet. FOTI hosts writing workshops and seminars during each visit, followed by an open mic during which the incarcerated participants can share their stories.

Richardson says that the program is not only therapy for the people inside the facilities but also serves as a form of reconciliation and release for her. The idea for Free on the Inside came from the mother of three’s search for a creative outlet through which to release her own frustrations and grew out of her own personal experiences.

“I used to be angry with no outlet,” she told The Root in a one-on-one interview. “I was facing 15 years in prison before getting myself together. It helped me find the passion to help those who seemed helpless or lost.”

After staring at 15 years in prison on three counts of aggravated assault with a deadly weapon with an intent to kill; and after her ex-husband and the father of her children committed suicide in 2013, Richardson decided to dive headfirst into her one true passion: poetry. The criminal case was dropped and the matter expunged from her record, but the experience changed her.

She decided that she wanted to use her craft as a tool in juvenile facilities but had no idea how to do it. Then someone from a correctional facility saw an article about her and gave her a phone call, helping her start Free on the Inside.

“We focus on positive reinforcement and positive outlets in regards to channeling frustration. One guy told me he had been inside for 16 years and had never stepped foot in the chapel, and for the first time in his life he felt free,” Richardson said. Regarding the power of poetry, she added:

Aside from workshops and open mics, Richardson uses writing and poetry as educational tools to help the inmates once they leave. She also helps the Dade facility’s poetry-slam team with writing and performance development. FOTI has created a six-week writing course to develop writing skills, and in exit interviews, FOTI has found that many of the former participants of Free on the Inside used the concept of positive reinforcement and positive thinking as a way to channel and dissipate their frustration through communication. FOTI also utilizes prisoners who are in for life and teaches them how to facilitate workshops on their own.

In April, Free on the Inside plans to host an art exhibit that pairs poets with artists who will create works of visual art based on the themes of the poets’ writing. Future plans also include helping create slam teams inside Florida prisons that could possibly compete against one another via technology. FOTI is actively searching for grants and funding to increase the reach and effectiveness of the program.

Personally, Richardson continues to work as an artist and poet. She hosts and performs poetry around the country, and last month, her Dada Slam Team, a local, nonprison poetry group she’s a member of, competed against teams from around the world at the National Poetry Slam in Denver, winning the national prize for group-poetry performances. While she says she was proud of the title, she was most excited about telling her prison family about it.

“We have become a family with them. Of the [now] 215 prisoners, we notice when someone has gone home, is in the hole, or simply can’t make it. Regardless of their choices—and not all were mistakes, some were choices—we let them know that they can they change themselves, they are people and deserve to be treated as such,” Richardson said

That kind of extra-strength radioactive love is impossible to re-create with top hats and sticks. It might seem like some sort of spectacular abracadabra, but the miracle that is black women is more than any incantation or spell could ever conjure. It is more beautiful than it is fantastic. It is so much stronger than sorcery that Taylor Swift and anyone named Kardashian spend all their time trying to steal it.

But if you ask the men or women in Dade, Everglades or Homestead how they managed to free themselves while still being locked behind bars, they might point to Eccentrich Richardson and tell you how they learned how to let go of their pain and frustration through the examples she taught them. They might tell you how they learned to escape their own suffering with the guidance of this black woman. Maybe they could explain how one particular black girl’s journey helped give them the confidence that they could do the same.

But I doubt they’d say it was magic. 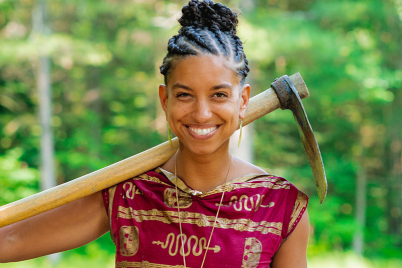 Why Farming Is an Act of Defiance For People of Color

Jennifer Baker: Electric Literature – Medium The Harlem Renaissance is not the only…