BY CAROLINE HOWE FOR DAILYMAIL.COM, The DailyMail

African Americans have run the White House kitchen as chefs, personal cooks, butlers, stewards and servers for every First Family for nearly one hundred and fifty years beginning with George Washington’s presidential term in the late 1700s.

It was the black kitchen chefs and cooks who prepared the superb comfort food for the First Family and dazzled presidential guests with their cooking.

Nearly every distinguished family in Washington had black servants, butlers and cooks in the 19th and early 20th centuries.

Presidential families were no exception and there have been no less than 150 African Americans on the president’s culinary team. First Lady Jacqueline Kennedy changed that precedent when she created the position of White House executive chef in 1961, who was responsible for most of the culinary duties and consulted directly with the First Lady.

That diminished the position of maitre d’hotel to chief butler or headwaiter but still important to food operations historically held by an African American.

‘It would be decades before an African American once again held total responsibility for the operations of the Executive Residence, and that happened in February 2007 when President George W. Bush tapped Rear Admiral Steven W. Rochon to be the eighth White House chief usher in history’, writes author Adrian Miller in his upcoming book The President’s Kitchen Cabinet: the Story of the African Americans Who Have Fed Our First Families from the Washingtons to the Obamas. Monsieur Verdon was galled when Johnson had Zephyr show him how to make these ‘homey dishes’, a sharp contrast from les beaux jours of Camelot. He eventually resigned and ‘an African American cook bested a French Chef’, writes the author. Black personal cooks first arrived at 1600 Pennsylvania Avenue with the first president who was responsible for paying for domestic staff as well as underwriting all entertaining costs.

It was cheaper for the president to bring his cooks and personal servants than to pay competitive wages in what was an open labor market.

The job pressures finally got to Johnson’s cook, Zephyr Black Wright who called the White House ‘a prison’. In the five years she was there, she gained eighty pounds. One early perk for White House residence staffers was tips from guests until Mamie Eisenhower banned it in the 1950s leaving some to exist on a mere $48 a week before taxes.

‘Living in the White House was considered a perk but not always a pleasant one. Enslaved cooks were forced to live the majority of their lives in the White House’s basement or attic, where the servant quarters were located’, writes the author.

But they weren’t alone in the servants’ quarters.

By the 1890s, the basement was overrun with vermin, insects and rats so plentiful that they dragged an entire ham off the servants’ dining room table during the Lyndon Johnson administration in the 1960’s.

Months later, an atrocious odor led residents to the completely gnawed ham bone behind a wall.

Situated in a swamp, the basement typically flooded after rainstorms and it was claimed that one African American cook killed the rat invasion by sitting on them.

The basement is now termed the ground floor because it opens out onto the South Gardens.

The slave quarters accessed a great kitchen forty feet long with large fireplaces at each end where meals were initially cooked, a family kitchen, storage and workroom and the servant and slave bedrooms where ‘enslaved Africans ate, slept, socialized and made the best of their imprisonment’.

The live-in requirement continued well into the 1920s in a Jim Crow city where blacks could not freely travel about and were refused service at restaurants.

With FDR’s administration that began in the early 1930s, they were able to move into housing off the White House grounds or apartments in the White House.

Many African Americans learned to cook because it was one of the few employment opportunities open to them and they were considered ‘natural born cooks’. A team of five staffed the earliest presidential kitchens. A steward or housekeeper was responsible for purchasing groceries and planning menus. There was a head cook, a second cook for the residence staff and two additional staff for preparation and cleanup duties.

Over time that staff increased to eight and nine if the president requested a private chef cooking only for the First Family.

The head cook reported to the First Lady to set the menus for their husbands and became the ‘diet-enforcer-in-chief’.

She planned all private menus, consulted with the kitchen staff on what to make, sometimes on how to make it and what the President should not be eating.

‘Few incoming presidents have started their presidencies as perfect specimens of health’, writes the author. ‘They are usually older, sometimes overweight, and often on some physician-ordered diet. Add to that the overwhelming stress of being president, and one has the sufficient conditions for an intense and persistent craving for junk food’.

Typically Presidents have strayed from their diet on the sly, enlisting other family members, trusted aides or residence staff to sneak in contraband food on the ‘do not eat’ list.

Dogs in residence at the White House were also put on diets after feasting on rich meals of fresh meat and veggies.

President Franklin Roosevelt’s best friend and his first dog in residence, a Llewellin setter named Winks, devoured twelve plates of fried eggs and ham that had been set out by the cook in the servants’ dining room.

Cook stepped away ever so briefly to summon the staff to breakfast and when she returned, the plates were licked clean.

Sadly, Winks’ time was up in the big house and that cleared the way for his famous black Scottie, Fala, who was too short to table or counter graze. President Lyndon Johnson was livid when he learned that his monthly bill for dog food for his beloved Beagles, Him and Blanco, was $80 in 1965.

‘Goddamn it. I’d be laughed out of Johnson City if anyone knew what I’m paying to feed a couple of dogs’.

‘Christ, a family could live on it’.

To cut back on what he thought was a staggering expense, hamburger was eliminated from the Beagles’ diet.

JFK allowed his brother Bobby’s black Labrador to run wild through the aisles of Air Force One completely annoying everyone on board. The crew quickly put an end to that by mixing up a couple of martinis and serving them to the dog on a plate. He promptly fell asleep.

The honey used in the recipes was cultivated from a beehive kept on the White House grounds.

On Air Force One, Obama loved eating ‘a blue-cheese burger with lettuce, tomato and garlic aioli, and Parmesan-sprinkled fries’.

He loved chocolate fudge cake as well as other flavored cake infused with limoncello.

When Rochon exited to work in the U.S. Department of Homeland Security, ‘President Obama broke the mold when he selected Angella Reid to be the first African American woman (and first woman, period) to serve as chief usher’, writes Adrian Miller.

Being a Texan, he loved biscuits and chicken potpie, grilled cheese sandwiches made with Kraft cheese and white bread and Mexican food like huevos rancheros.

He had Hawaiian French toast prepared for him on Air Force One.

If Hillary was on board, ‘the menu leaned heavily to chicken Caesar salads with low-cal dressing’.

Ronald Reagan, the 40th President (1981-1989) loved Bavarian Cream Pie and was so thrilled when he found it on the Air Force One Menu. That is until Nancy Reagan came along behind him and told him, ‘You’re not having any of that’. Of course he acquiesced to Nancy.

Jimmy Carter, the 39th President and First Lady Roslyn Carter arrived in 1977 and were thrilled to learn that the Executive Mansion operated as a daily House of Soul. Food prepared for staffers was American Southern-style cooking: fried chicken, pork chops, pigs’ feet, cornbread and black-eyed peas.

Being from Georgia, the Carters loved soul food.

Richard Nixon, the 37th President (1969-1974 when impeached) loved a pedestrian dish of cottage cheese with ketchup.

On inauguration night, when First Lady Pat Nixon discovered there was none to be had in the White House, she sent staff out to find a deli still open to buy some. She made sure the kitchen was never without cottage cheese after that.

He was always bringing back guests to the White House at all hours to try her cooking. She knew how to handle LBJ and she would tell him to just go sit down and wait and she liquored the guests up while she cooked.

Johnson threw a tantrum when he didn’t get his scotch and soda mixed just the way he liked—3/4’s liquor, ¼ soda. He’d throw the whole drink on the floor and demand a new drink.

John F. Kennedy, the 35th President (1961-1963), went in search of a chef who knew how to cook New England seafood dishes like clam chowder and any kind of fish.

He and Jackie were connoisseurs of fancy French cuisine and had their French chef cook it for them at the White House.

Dwight Eisenhower, the 34th President, (1953-1961), loved gourmet food and sometimes put on an apron to do his own stirring at the soup pot. He ate the same thing every morning: OJ, a little fried egg, one piece of bacon, toast and pineapple jam.

He installed a state of the art grill on the roof of the White House. When he grilled steaks, ‘the rising smoke alarmed passersby on Pennsylvania Avenue’.

Bonner wanted to be ‘president of cooking’.

His chef at the White House was Lizzie McDuffie.

When a movie executive was dining at the big house and saw Lizzie, he wanted her for the role of ‘Mammy’ in the film, Gone with the Wind.

Eleanor Roosevelt lobbied the studio on behalf of Lizzie but she didn’t get the role.

FDR so loved the culinary delight of sweet and sour pigs’ feet, he was eager to share his love with a favorite VIP, Prime Minister, Winston Churchill.

The Prime Minister declared them to be, ‘Very good, but sort of slimy’.

He found an ‘old colored woman who was black as coal and weighed 300 pounds.’

Thomas Jefferson, the 2nd President (1801-1809), developed a macaroni mania and had a macaroni-making machine shipped from Naples.

He loved his pasta served with Parmesan cheese and butter. His enslaved chef, James Hemmings, added cream to the recipe that delighted the President and he began serving it at dinner parties in 1802.

He also loved ale and brewed beer at Monticello after his presidency. 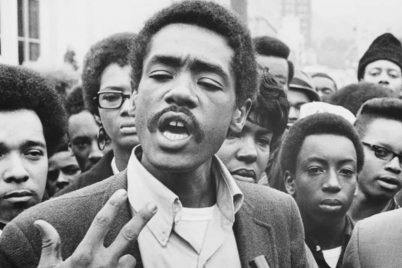