Two years ago, the Equal Justice Initiative, based in Montgomery, Ala., shook us out of our collective historical slumber to force us to reckon with a horrific part of our national past. The organization founded and run by Bryan Stevenson released a report that documented “‘racial terror lynchings’ in 12 Southern states between the end of Reconstruction in 1877 and 1950.”

On Tuesday, EJI will release an update of its stunning report with a focus on the “more than 300 lynchings of black people in eight states with high lynching rates outside the Deep South.” Thus, bringing the total of documented lynchings to more than 4,300. Here are the states and the gruesome tallies.

Twelve of the lynchings are briefly profiled on the EJI website. One involved a man from Maryland named George Armwood. According to the report, “a mob of more than 1,000 white people began to form” after the “23-year-old mentally ill black man” was brought to the county jail. The report notes, “They broke into the jail using 15-foot timbers as battering rams, placed a noose around Mr. Armwood’s neck, dragged him from his cell, and hung him from a nearby tree.” The reason for his arrest? He was “accused of attacking an elderly white woman.”

One thing you’ll notice in looking at any of the lynching cases is that a common trigger for such bloodthirsty extrajudicial killings was almost always some accusation of an “assault” against a white woman, including rape. “I don’t think there’s any question that fear of interracial sex was the most consistent and common provocation that could create mob violence directed at African Americans,” Stevenson told me during an interview Monday. 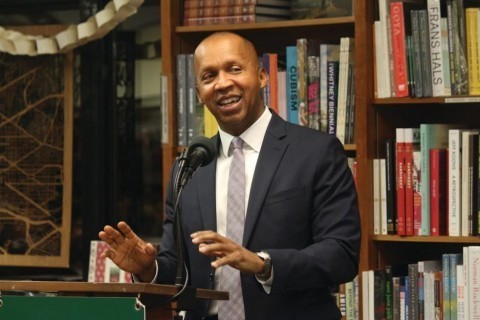 But, as he further explained, the definition of “assault” was murderously broad. “If you dug deep into some of these accounts, very frequently there wasn’t an allegation that something sexual actually taking place or even something assaultive,” Stevenson said. “In a lot of these events, it was a gesture of intimacy. So a black man wrote a note to a white woman. Or a black man said something flirtatious to a white woman. Or a black man didn’t recognize how socially inappropriate it was for him to interact with a white woman. And even that would be characterized as an assault, as attempted rape.”

The horror of what happened to Armwood didn’t end there. His body was dragged down the town’s main street and then set on fire as it hanged from a telephone pole. At least Armwood’s body wasn’t torn apart, as happened at countless other lynchings to make macabre souvenirs for the soulless ghouls who reveled in the barbarity. “These lynchings were intentionally barbaric, torturous, gruesome,” Stevenson said. “People took pride in responding to this ‘menace of black criminality’ by meeting it with extraordinary barbarity. There are accounts of people who would be castrated and then hung and then shot a thousand times. Everybody wanted to shoot the dangling bodies so they could say that they had participated in the killing of that person.”

Think about that for a moment. Entire communities and towns would take part. Surely, you’ve seen the photos of dead and dangling black bodies surrounded by smiling white crowds. Some of those pictures were postcards people actually sent in the mail. Let that level of depravity sink in. I asked Stevenson what kind of message such violence and barbarity sent to African Americans living in those communities. The heartbreaking eloquence of his response deserves to be read in full.

I think people today have this misconception that black people a hundred years ago were just, you know, too timid or didn’t have the right values or just weren’t strong enough to not cooperate with Jim Crow. And they fantasize that they would have never complied with the signs that said “white” or “colored.” And it is this in some ways insulting view of the African-American community that sometimes gets expressed. 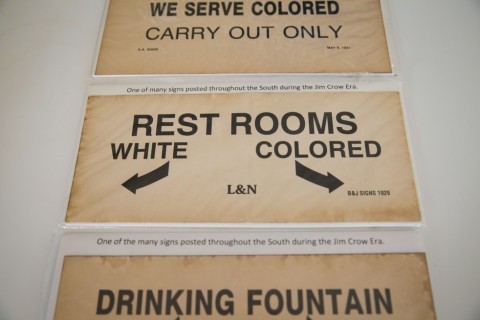 Detail of segregation signs that Charles Person has kept, taken in his Atlanta home on June 30, 2016. Person was one of the original 13 Freedom Riders in 1961. (Kevin D. Liles for The Washington Post)

The reason why Jim Crow and racial subordination and segregation was effective is because it was enforced through terror and violence. Non-compliance would be risking your life. And African Americans had to choose between survival and defiance.And that dynamic was effectively established, primarily through lynching, these spectacle acts of torture.

And that’s why so many left that’s why we had 6 million people leave the Deep South during the 20th century. It’s why organizing the civil rights movement was such a heroic achievement, because, you know, Dr. King and the student leaders and others weren’t just organizing to face the brutality of sheriffs and white law enforcement. They were also organizing to overcome decades of fear and intimidation that had been developed through this era of lynching. And the impact the trauma created by that is something that we cannot minimize.

I often say that the black people that went to the Midwest and north and west to these communities in Cleveland and Chicago and Los Angeles and Oakland didn’t go there as immigrants looking for new economic opportunities. They went to those communities as refugees and exiles from terror in the American South.

More than 6 million African Americans were part of the Great Migration of out of the deep South between 1915 and 1970. They settled in cities throughout the North, Midwest and West. Stevenson said it was important to shine a light on lynchings outside of the South because they were “incredibly consequential for communities in the North and West,” such as Cleveland, Chicago, Minneapolis, Los Angeles and Oakland.

“Many of these communities that have large urban populations of African Americans today, still struggling with generational poverty and exclusion, these communities were shaped as a result of this era of lynching, Stevenson told me. “We need to understand that if we’re gonna be effective in addressing the needs of people living in those communities today.” 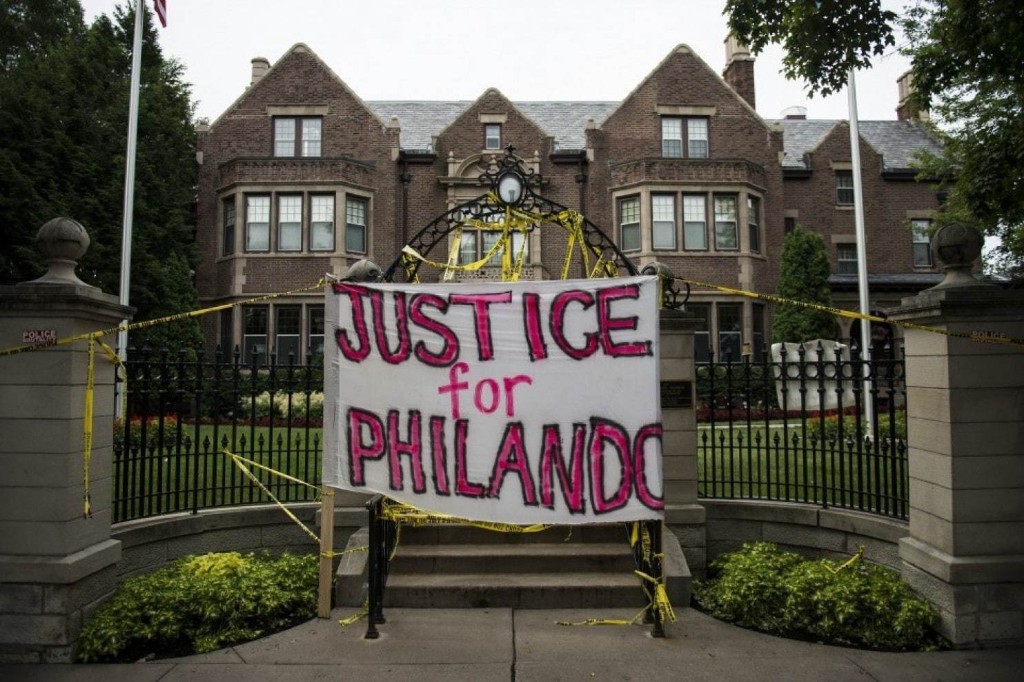 What Stevenson said in that block quote about how the message to African Americans was that no one could protect you — not the police, not Congress — moved me to ask him about the parallels between then and the feeling among blacks that there’s nothing they can do to save their own lives when dealing with police. Three things came to mind, he said.

“The narrative of white supremacy, the narrative of racial difference that was used by people to legitimate and sustain slavery was not addressed by the 13th Amendment.” Stevenson said. Also, the communities that participated in lynchings never “had to feel shame about their history of lynching.” Because of that, lynchings went “indoors” after pressure finally succeeded in stopping such public displays of violence, Stevenson said. “They started trying people inside and they had the same kind of unreliable verdicts and the same kind of death sentencing and the same kind of abuse of people of color in the courtroom that existed outside the courthouse during the lynching era.”

“The second thing is that, when you live in a country where this history has been unchallenged and where you don’t actually talk about it, the shame quotient remains pretty low,” Stevenson continued. “We can’t get to liberation without some acknowledgement of the wrong. … Until we do that, we’re gonna practice this denial tactic, this silence tactic, when young African Americans, who are unarmed, are shot and killed by the police.”

Stevenson’s last point was that the burden of all this an American one. “I think all Americans have difficulty valuing the lives and experiences of African Americans or people of color who are the targets of abuse. And you see that in these jury verdicts,” he said alluding to the acquittal last week of the police officer in the killing of Philando Castile. “The jurors on these cases aren’t members of the Klan. They’re not avowedly racist. They have just been acculturated to accept a certain kind of burden that people of color bear, to accept a level of victimization that they wouldn’t accept for themselves, but they’re comfortable seeing in these other communities.”

That is the attitude Stevenson is working so hard to illuminate in the hopes changing it. But it requires we face a horrific history of racial terrorism that still molds our present and future. “Until we acknowledge this history and create a consciousness about this history,” Stevenson said, “we’re not gonna do the kinds of things we need to do when it comes to police violence, when it comes to anti-discrimination work in America today.” 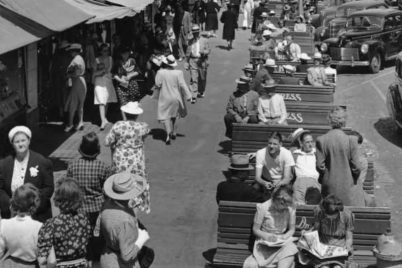 Like many other public spaces, Black people were not allowed to sit on St. Pete’s…