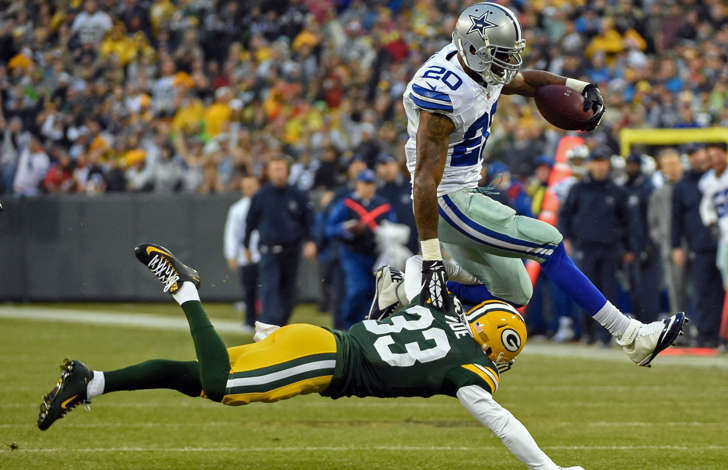 IRVING, Texas (AP) — Since the Cowboys settled on Darren McFadden as the lead running back seven games into the season, he has proven a worthy replacement for 2014 NFL rushing champion DeMarco Murray.

It just hasn’t translated into victories, a familiar feeling for McFadden after seven largely disappointing years and no winning records in Oakland after getting drafted fourth overall by the Raiders in 2008.

McFadden has a shot at his second 1,000-yard season. He’ll have to wait at least another year for his first winning season, though.

The Cowboys (4-9) are on the verge of playoff elimination in a season mostly without injured quarterback Tony Romo heading into a home game against the AFC wild-card contending New York Jets (8-5) on Saturday night.

”For me, that’s all bitter,” McFadden said. ”I’m happy about the fact that I have been out there, been able to run how I have been running. But you want to get victories with that. When it comes down to the end of the day, the yards I rush for don’t mean anything without `W’s.”

McFadden has 798 yards on 192 carries for his first 4-plus average per carry in four years. But the better gauge is the past eight games, when he has averaged 84 yards with one of the heaviest workloads of the 28-year-old’s injury-filled career.

The Cowboys were cautious with McFadden in training camp because of his injury history, keeping him sidelined the first couple of weeks with what was considered a minor hamstring injury. Then Dallas stuck with Joseph Randle as the starter early in the season after he spent two years as the backup to Murray, who took big money from Philadelphia in free agency after breaking Emmitt Smith’s franchise record for yards in a season.

Randle injured his back early in a game at the New York Giants, and McFadden responded with the team’s first 100-yard game of the season. Randle was sidelined for personal reasons and eventually released, clearing the way for what is likely to be McFadden’s second-best season as a pro.

Except for the victories.

”Anytime you’re losing games they way that we’ve been losing, it’s just hard,” McFadden said. ”We have a lot of fighters on this team. We’re just going to keep grinding and just keep fighting.”

McFadden helps illustrate a frustrating year for an offense that lost Romo for seven games with a broken left collarbone and again two games after his return with the same injury.

In last weekend’s 28-7 loss to Green Bay, McFadden had a 50-yard run on the first series, then was promptly stuffed for a 1-yard loss on first down from the 2. Matt Cassel threw an interception on third down, so the Cowboys didn’t get any points.

The NFL’s worst team on third-and-1 had another failure in that situation, and went 1 of 11 on third down overall. McFadden ended up with just nine carries for 111 yards, which included a 45-yard gain on the only scoring drive for the NFL’s 28th-ranked offense.

”It kind of dictates our season, kind of been up and down for us as far as the offense,” said McFadden, whose only 1,000-yard season with Oakland came in 2010. ”We know that we can go out there and make plays.”

Without Romo, McFadden doesn’t have the downfield passing threat that loosened things for Murray’s record-setting season last year. And there have been some stinkers since McFadden took over – 32 yards against Tampa Bay and 11 against Carolina, both losses.

But he’s in line for just his second 16-game season. The other was last year in Oakland, when he was a part-time player. So this could be a first – a full season as the No. 1 guy, and with another year on his contract.

”He’s been a productive player for us,” coach Jason Garrett said. ”It takes everybody, and Darren is certainly working hard to do his part and he’s been a bright spot for us running the football.”

McFadden will have to keep waiting for the year when his production plays a role in a winning season.

NOTES: LB Rolando McClain (concussion), CB Morris Claiborne (hamstring) and DE DeMarcus Lawrence (chest) did not practice Wednesday, putting the availability of all three starters in question against the Jets.