Carolina Panthers quarterback Cam Newton has been labelled a ‘sore loser’ after emotionally storming out of a press conference following Sunday’s unexpected loss to the Denver Broncos in Super Bowl 50.

Grilled over how disappointing it was to walk away second place having been widely tipped as favorites, Newton managed a single complete answer before resorting to one-word responses.

Pushed on how the team was taking the defeat, the 26-year-old sat stony-faced for a few moments before silently getting up and walking out of the press conference.

His sulky display followed a series of on-field tantrums after it became clear the Panthers were heading for a loss.

One came early in the fourth quarter when Newton found himself taking a big hit inside his own end zone after throwing the ball away under pressure from a rampant Broncos defensive unit.

After tumbling to the floor he looked at match officials hoping for a ‘roughing the passer’ call, and when he didn’t get it he threw himself around, before storming off with his teeth gritted.

The next sulk came towards the end of the fourth when the Broncos managed to sack Newton for the seventh time during the game, stripping the ball from his hand.

Manning’s team collected the ball within the 5-yard line, and moments later were celebrating their second touchdown of the game – both of which came after strip-sacks.

One man not celebrating, however, was Newton who was captured standing on the sidelines before collapsing backwards on to the turf, knowing he had lost.

To top it all off, Newton was trolled by Broncos cornerback Aqib Talib after the game.

Manning, on the other hand, told NBC’s Today show on Monday morning that Newton displayed great humility when they came together at the end.

‘Cam couldn’t have been nicer to me. He was extremely humble,’ Manning said.

The Panthers’ 14-point loss marks a remarkable upset in a near-perfect season that saw them go 15-1 in regular games before beating the Seahawks and cruising past the Arizona Cardinals with a record-breaking Championship score.

It also marks a huge disappointment for Newton just a day after he was named NFL Most Valuable Player by a landslide vote.

A nationwide panel of 50 sports writers and broadcasters who regularly cover the league were asked to name the recipient of the award, with 48 voting for Newton.

Accepting the award, he said: ‘It means so much, but not just for myself. To be the first person in Panthers history to win it – that’s what I’m most proud about. ‘I’ve received a lot of awards, but to be able to get this organization here, I’m really proud. We didn’t get in this position by happenstance.

‘It took years of hard work and dedication, and now we are reaping the benefits.’

Meanwhile Peyton Manning is living his Super Bowl dream this evening after clinching the title for the second time in history despite being the oldest quarterback in the NFL.

The Broncos also extended one of modern NFL’s biggest superstitions after winning while wearing white jerseys.

As the designated ‘home’ team, the Broncos were allowed to opt for their choice of color and picked white, which 10 of the last 11 Super Bowl winners have worn.

Thanks to their victory, that statistic has now been extended to 11 of the last 12.

Sportsnaut | Source, MSN The first seven weeks of college football have flown by.… 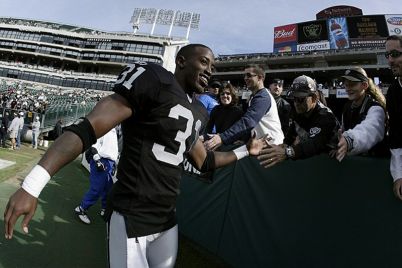