Going plant-based is a popular move for a lot of runners—ultrarunner Scott Jurek has had a lot of success on a vegan diet, and he’s inspired others to do the same. But changing your diet in a meaningful way is about more than simply swapping meat and potatoes for fake-meat and potatoes. It’s a major lifestyle shift.

And vegetarian versions of your carnivorous favorites, like meatless chicken nuggets and Italian sausages made from tofu, aren’t necessarily better for you than the real deal. Most are highly processed and loaded with sodium. Whether you’re exploring a more plant-based diet for weight loss, or to see if going vegetarian can make you faster, use this list to learn about the worst meatless foods for your diet, and how to fill your plate with healthy plant-based protein.

Meatless freezer foods are low in fat, but they tend to pack tons of salt. One Gardenburger Original Veggie Burger patty, for example, contains 400 mg of sodium.

Nuggets are even worse: a serving of Boca Original Meatless Chik’n Nuggets racks up a third of the 1,500 mg of sodium the American Heart Association recommends for optimal heart health. “Some products have sauces or come pre-marinated, which makes it convenient and easy, but they will be really high in sodium and MSG,” says Marjorie Nolan, RD, CPT, a spokesperson for the Academy of Nutrition and Dietetics. If you’re going strictly vegan, pay close attention to the labels on these products, she says. Some may actually include non-meat animal sources of protein.

Looking to boost muscle recovery? Sprinkling whey powder into your morning smoothie may help. “But you don’t want this to be one of your primary sources of protein,” says Nolan. Supplements alone cannot replace the quality proteins in meat or dairy, she says. And when you do use a supplement, choose a powder that has natural ingredients and is not artificially sweetened.

Nuts pack a dose of healthy fat in addition to protein, but they’ll do you more harm than good if they’ve been coated in sugar and salt. Noshing honey-roasted rather than raw almonds adds an additional teaspoon of sugar and 60 mg of sodium to your snack. Plus, seasoned versions may have less of the good stuff nuts are known for. “Roasting nuts actually degrades some of their nutrients,” says Nolan.

It’s been drilled into our brains that tofu is a low-fat protein powerhouse, but when it takes the form of kielbasa, pepperoni, bologna, or roast turkey, it’s no healthier than the meat version. Many mock meats are the tofu equivalent to processed deli meats, which are typically very high in sodium. “Tofu products come from a bean and don’t contain antibiotics, added hormones, and animal products, but they’re still processed foods,” says Nolan.

Cheese is a great source of protein and calcium, so enjoying an ounce or two each day is okay, says Andrea Giancoli, RD, a spokesperson for the Academy of Nutrition and Dietetics.

What not to do: replace the beef and chicken in your diet by eating nothing but grilled cheese sandwiches on white bread for dinner every night, she says. Despite its benefits, cheese is high in calories, fat, sodium, and cholesterol, and can quickly become a belly buster. Milk is a smarter source of dairy-based protein—it has seven to eight grams of complete protein per cup, says Giancoli. A complete protein is one that has all nine essential amino acids—the ones our bodies can’t make and that we must obtain from our diets, she explains.

“Soy is a complete protein with an amino acid profile that rivals steak–only without the excess calories and artery-clogging fat and cholesterol,“ says Janet Brill, PhD, RD, author of Cholesterol Down and Prevent a Second Heart Attack. The nutritional champions of the legume world, soybeans are also packed with vitamins, minerals, fiber, and disease-fighting plant compounds. ”The best way to eat soy protein is in its least processed forms: edamame, soy milk, tofu, and natto are your best bets,” says Brill.

Legumes are a low-cost way to fill up on protein. Lentils, for example, cost pennies on the dollar and provide 9 grams of protein per half-cup along with fiber, vitamins, and minerals, notes Brill. “Lentils cook up quickly and can be tossed into salads, added to pasta sauce, or eaten as a side dish,” she says. Also try mixing peas into a salad, serving beans as a side dish or using them to jazz up a salad or vegetable-based soup, and making chickpeas into hummus and using it as a sandwich spread.

“Nuts and seeds are super sources of plant protein as well as fiber and vitaminE,” says Brill. “Some are rich in ALA, the plant version of heart-healthy omega-3 fatty acid.” But they’re high in fat, so adhere to portion sizes (a serving ofalmonds is 1 ounce—about 23 pieces—which contains 164 calories and 6 grams of protein) and pick dry-roasted, unsalted varieties. Can’t resist scooping up these snacks by the handful? Use nut butter as a sandwich base or enjoy it as part of a snack, like peanut butter and apple slices, suggests Brill.

These new-to-the-scene health foods are seeds, but we’re singling them out since quinoa is a perfect protein on its own and hemp is nearly complete. “At 9 grams of natural plant protein per cup, quinoa is one seed that should grace the dinner plates of all seeking a healthful alternative to meat,” says Brill.

In addition to protein, hemp seeds contain omega-3 fatty acids, says Giancoli. This also makes them high in fat, so go easy on these crunchy bits. Blend powdered hemp into smoothies or sprinkle seeds on top of salads or cereal. Don’t forget to grind the seeds or chew them thoroughly, notes Giancoli. “You won’t get the protein or fatty acids from the seeds unless they are broken open,” she says.

“Grains are a great source of protein as well as fiber, vitamins, minerals, and disease-fighting antioxidants,” says Brill. “Just make sure the grains you choose are whole, as processed grains lose their fiber, natural vitamins and minerals, and most of their protein.” And don’t snack on slices of multigrain bread solo and expect to reap the protein benefits of beef.

By themselves, most grains, seeds, nuts, and legumes don’t contain all nine essential amino acids, says Giancoli. “But if we pair grains with legumes—or legumes with nuts or seeds, that makes a complete protein.” Try brown rice and beans, whole wheat couscous with lentils, or hummus made with garbanzo beans and sesame seeds, she suggests. 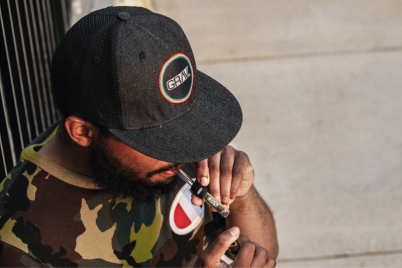 Black men are the hardest hit by these overdose disparities. There were 54.1 fatal drug…

How to Conquer Cravings, Stress-Eating and 6 Other Weight Loss Hurdles

By Laura Schocker / Real Simple You know what to do to lose weight: Eat a little less,…

A Positive Path to a Healthy New You

(Family Features) For many people, the New Year brings the resolve to just say no to…