It’s a wonder the human race managed to survive before the advent of a date sticker telling us when we should be eating certain foods by, but survive we did. Mostly we sniffed our food and decided whether to eat it or not. These days, around half of us go by the date label printed on the packaging, and will often throw away food that is safe to eat. According to the Waste Resources Action Programme (Wrap), an organisation that promotes sustainability, we throw away 4.2m tonnes of food every year in the UK, which, aside from the financial costs, has a huge impact on the environment.

We buy too much, or we cook too much, or we forget to store leftovers properly. But the biggest reason for throwing food away is because we don’t use it in time, and, in many cases, we simply look at the date on the packet rather than the contents – and that date might be OK to ignore. In February, a supermarket opened in Denmark that only sells food past its sell-by date. In the UK, online retailer Approved Food sells “short-dated” goods – defined as approaching or past their best-before date.

The problem is that there are so many dates, it is confusing. “Under EU law, most food is required to have either a use-by date or best-before date,” explains Kevin Hargin, head of foodborne disease control at the Food Standards Agency. Food companies will decide which date to use, and the length of each, usually with the help of their own scientists. “This will include taking account of the quality and nature of the raw materials, any processing, the length and nature of the supply chain, and how the product will be stored both at retail and by the consumer.” 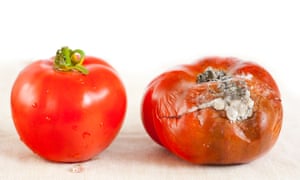 Use-by dates relate to food safety and best-before dates relate to food quality, he says. “Use-by dates are usually applied to fresh, perishable foods that may make you ill if they go off, while best-before dates are used for products such as bread and cakes which are unlikely to make you ill if you eat them past that date, although the quality may have deteriorated. Sell-by and display-until dates are there to help shop staff with stock rotation.”

Not everyone panics the day after spotting their pack of tomatoes has exceeded its best-before date. You may be someone who fishes “perfectly good” food out of the bin that someone else in your household threw away. You may have gunky bottles of 20-year-old Tabasco sauce, and tins featuring obsolete branding. Perhaps you never throw cheese out, regardless of how much of its surface area is covered with green fur – you just shave it.

How relaxed should we be about dates? “The advice is: you shouldn’t be eating foods after the use-by dates,” says Iain Haysom, a microbiologist and senior lecturer in food safety at Bath Spa University. “Within that, there are foods that pose a higher risk than others – meat and fish are more likely to contain some of the nasty pathogens, but also some things such packaged salad leaves and beansprouts.” But there are many variables such as how good your fridge is, and how well your body reacts to harmful bacteria. Some of the nastiest bugs, such as E coli and salmonella, won’t cause food to smell off. He admits he eats cheese and yoghurt past their use-by dates if they are unopened. “But if you’ve got young children or people who are ill, it’s best not to take that risk.” You can extend the use-by date by cooking the food on the day it expires, then keeping it in the fridge for up to two days, or freezing it.

If fruit and vegetables are stamped with a date, it tends to be a best-before one, rather than “use by”, unless they have been processed – the ready-chopped fruit salad, or the spiralised courgette you can now buy in the supermarket. This kind of processed food, says Haysom, “exposes surfaces and leaches moisture, and that’s the sort of environment that might support the growth of any bacteria”. I’ve had tomatoes that have stayed in the fridge for weeks, and apples I’ve kept for months. Best-before dates on unopened tins or things like packets of dried pasta can be ignored. “You might lose a bit of flavour or quality but [ignoring] best-before dates shouldn’t pose a health risk,” says Haysom. A colleague gave him a tin of oatmeal from the 1960s; he opened it and it was fine. Emine Saner 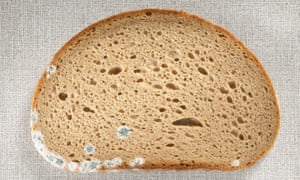 At work, people are paying money so you’re going to use the best and if something is substandard, you’re not going to serve it. But at home I’m not going to throw odd bits of lettuce in the bin. I had a bit of pancetta at home, and it had a bit of mould on it. There’s nothing wrong with that because it’s a smoked, cured meat. If I think something is off, I throw it away, but if I think it’s fine, I eat it. I wouldn’t throw something out just because of the sell-by date. If there is veg that feels a bit wilted, I would cook it, not throw it away. I admit there is some confusion. I’m never sure about eggs – whether to keep them in the fridge or at room temperature – but eggs never really stay around for long enough in my house for me to worry about whether they’re fresh or not. If I make pasta, I’ll eat the leftovers the next day – I just add a bit of water and heat it up. 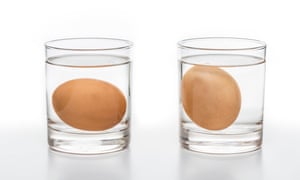 A strong survival instinct runs in my family. We don’t take unnecessary risks. My dad has waged a lifelong campaign against licking batter from the mixing bowl: he sees sorrow, salmonella and certain death in every drop of uncooked egg. My sister gave us her Christmas chocolates because their best-before date was in a month’s time and one of the Maltesers was shaped like a peanut. I’ve inherited this sell-by date cautiousness, which is a really uncool thing to say in the food world. If you’re into food, you’re meant to be into all of the food, including the soggy, smelly and seemingly unsavoury bits. When eggs are even a day past their best-before date, I agonise: I hold them to my ear and whisper to them and float or sink them in water. If all looks OK, I will then, just to be careful, cook them until they’re rubber-hard. I want to be better at eating resourcefully and sustainably, though. I want to learn just to scrape off the mouldy bits, go dumpster diving and eat nose-to-tail. In testing recipes for my next cookbook, I’ve made a few steps in the right direction. Some withered carrots at the bottom of the vegetable drawer might turn into a spicy carrot and chickpea salad, rather than being relegated to side dish or – worse – the bin. There’s hope for me yet.

I’ve got a pretty liberal attitude to best-before dates but even I have my limits. Once, I was on a placement at uni with a girl who made a giant pot of beef bolognese. She forgot to put it in the fridge. It lay in the corner of our sweltering kitchen for three days, incubating by the window until it had grown a thick layer of mould. She came in while I was making a cup of tea and realised she’d left it out. Right in front of me, she skimmed off the mould and tucked in. Misreading my look of horror, she offered the pan to me. “Fancy a bit?” “Uh no, I’m good thanks,” I replied, scuttling off to retch.

The only time I ever really pay attention to best-before dates now is when I’m buying food. Once it’s home, I just rely on my senses. If it looks, smells and feels all right, then it’ll be fine to eat. A friend had the opposite attitude – once it was out of date, it was in the bin. I remember fishing out a still wrapped and perfect-looking carton of grapes which she’d binned because they were a day past their date. She pointed out that I wasn’t a student any more and didn’t need to eat out of bins. I can’t help it, though. I just hate wasting food. Besides, even once past their best, a lot of things can still be eaten. You might just have to use a bit of imagination. Stale ends of bread can be turned into breadcrumbs or croutons. Overripe fruit can be turned into smoothies. The only thing I’m a bit more cautious about though is meat. There’s no coming back from rancid meat.

I smell it and look at it, and if something smells or looks off then it’s off. I find yoghurt normally lasts at least a week past its date. I don’t leave raw meat lying around for long but I will happily leave leftover spag bol in the fridge for four or five days. I’ve had onions that have lasted for weeks in the fridge. In my parents’ house, we’ve found a ketchup bottle that was 10 years old that was fine to use. I’m very careful with some things. The easiest thing with which to give yourself food poisoning is raw chicken. Cooked rice is never in our fridge for longer than a day or so, because it can harbour bacteria – but, equally, stir-fried rice is one of the staple leftovers meal we have.