BY Wills Robinson and Martin Gould In Charlotte, North Carolina For Dailymail.com

Disturbing videos have emerged of protesters brutally attacking white bystanders in Charlotte as violent demonstrations continued to engulf the city, 48 hours after a black man was shot dead by police.

A man was dragged and beaten by a mob while begging for mercy, an unconscious photographer was almost tossed into a fire, and a CNN correspondent was slammed to the ground in the midst of the chaos.

It was the second night of unrest following the deadly shooting of Keith Lamont Scott, 43, by African-American cop, Brentley Vinson, 26, at an apartment complex on Tuesday afternoon.

Police said 44 people were arrested for a variety of crimes such as assault, breaking and entering, and failure to disperse. At least 14 people, including five cops, were taken to hospital. North Carolina Governor Pat McCrory declared a state of emergency and has called in the National Guard after clashes on Wednesday night.

Major companies with offices in the downtown area – including Bank of America, Wells Fargo and Duke Energy – told employees not to come into work on Thursday.

Charlotte Mayor Jennifer Roberts had considered putting a curfew in place in a bid to control the disorder, which is set to continue, but police have said they don’t think the restrictions are needed.

Roberts added that Scott’s family will be shown the video of the police shooting on Thursday, but it will not be released publicly.

Police Chief Kerr Putney defended not making the footage available, saying it would impact the integrity of the investigation, even though he initially promised transparency during the case.

During a press conference on Thursday, he said: ‘Transparency is in the eye of the beholder,’ he said. ‘If you think I say we should display a victim’s worst day for consumption, that is not the transparency I’m speaking of.’

Putney also slammed the protesters who vandalized parts of the city and warned them they would be brought to justice.

An official who watched the footage told CNN that Scott made an ‘obvious threat’ towards officers before he was shot.  Another person claimed Scott also had an ankle holster.

However Putney said the video was not conclusive, and does not definitively show him pointing the gun. He added that his staff are thoroughly investigating all of the footage.

Scott’s family has asked the Mecklenburg County District Attorney and the North Carolina State Bureau of Investigation (SBI) to conduct their own investigation into the shooting.

Under state law, he is required to ask the SBI to investigate if he gets a request from family of a person killed with a firearm by an on-duty officer.

Putney and the Mayor were offered extra resources by the state on Wednesday morning, but turned them down as they didn’t anticipate the scale of what would unfold last night. An extra 700 law enforcement personnel will be on the street in Charlotte on Thursday night, with more violence expected.

Scott’s relatives have said he was just reading a book when he was gunned down, but police insist they found a weapon at the scene.

A man, believed to be Scott’s brother, was captured on video saying all white people are ‘f***ing devils’ just after the shooting.

One of the demonstrators was shot in the head outside the Omni Hotel and is fighting for his life. Two police officers also suffered eye injuries.

He was later identified as Justin Carr. His mother told WCNC he had ‘no brain function’ and was still in a critical condition on Thursday morning. A cameraman and reporter for WCNC-TV were also attacked while a CNN correspondent was body-slammed during a live broadcast.

Shocking video from one street also shows a photographer helplessly lying on the road just inches away from a blaze.

Police were then seen running over to help him up before he was taken to hospital, reports suggest.

CNN National correspondent Ed Lavandera was speaking to Anderson Cooper on camera at 9.16pm about how the crowd had turned violent when a man in a white shirt and dreadlocks ran into him.

He fell to the ground in the middle of the broadcast, prompting concern from the host.

U.S. Attorney General Loretta Lynch on Thursday called for a ‘peaceful way forward’ and offered local officials support from the FBI and other arms of the Justice Department.

There was calm in the city on Thursday morning, but large parts of downtown had been devastated. Many businesses and buildings, including the NASCAR Hall of Fame, were hit by vandals and looters.

Crews started work at dawn outing plywood over dozens of smashed windows, clearing debris and getting the Uptown area back to normal.

‘I heard our company got calls for 42 windows, glazer- mechanic Robert Jordan told MailOnline.com as he worked on his fifth of the day at the NASCAR Hall of Fame.

‘I’m getting plenty of overtime but I just hope we are not here tomorrow doing the same again.’

But fear of more violence Thursday night was on everyone’s mind in the upscale area of town as they wondered whether all their work may all be in vain.

Many businesses – including the city’s two main banks, Wells Fargo and Bank of America – remained shuttered as workers were told to stay home.

The Epicenter, an Uptown meeting place packed with bars and restaurants that had seen some of the worst violence on Wednesday night, also remained closed.

An overturned kiosk on the second floor was a reminder of the chaos of a few hours earlier.

The Omni Hotel, where a man was shot and critically injured, and where police had thrown teargas canisters in response to violent attacks, was open for business as usual with guests checking in and out.

At 300 South Tryon Street, where a new 25-floor skyscraper is under construction, a giant American flag was hoisted on to a crane atop the building as a sign of defiance to the rioters. 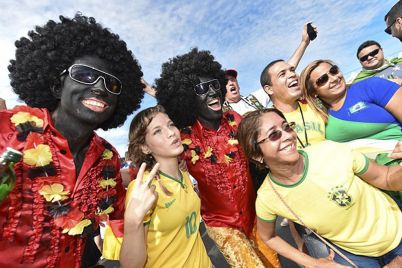 Lebron James: “This guy that we put in charge has tried to divide us once again”