Kudos to Michelle Obama for giving voice to the need to debunk the “angry black woman” label. While watching her give her farewell interview to Oprah, I felt a huge sense of gratitude for her taking what I consider to be a firm first step in the obliteration of a ridiculous label (that should have been long ago laid to rest). The moniker may seem harmless enough, but if you really examine it, it’s suggesting that a particular demographic group is inherently more angry as if it’s in our DNA somehow…hmmm, can you say “racist, sexist”? Furthermore, it proactively delegitimizes any complaints/concerns we might have while also robbing us of the ability to experience anger (a completely legitimate if not necessary human emotion I assume) because after all, we already have the label so we can’t do anything to reinforce it. Another huge problem is that it treats Black women as if they’re monolithic and anyone who has known more than a few Black women can certainly attest to the fact that we’re anything but. Indeed, I’m quite tired of the label. It’s completely lame and lazy in my humble opinion – lazy because it’s a cowardly, sinister way of attacking a group of people that may not be well understood instead of taking the time to comprehend the complex issues that they face.

I believe that we tend to fall into stereotypical thinking when we don’t really understand a particular group – whether we’re talking about Millennials, Little People, Native Americans, the visually challenged, or Black women. The key to dispelling the stereotype in many ways in my mind is simply sharing more of who we are as Black women. So, let me start the process…I’m a 45 year old Black woman, and I started a corporate training/keynote speaking firm in 2003 after working successfully in corporate America for more than a decade. I’ve been blessed to present training events and speak at conferences across the country and in several countries. Unlike Sarah Palin, I’ve always been quite interested in international travel so I started in childhood and focused more extensively in my 20s. I still remember marching in anti-apartheid marches in South Africa when I was in my 20s and too naïve to realize how dangerous it was. I attended one of the country’s elite post-secondary institutions Spelman College (which also happens to be a historically African American female college), then moved on to get industrial engineering and business degrees from Georgia Tech and later Emory University. Both my parents have PhDs in education and my college roommate (also my cousin) has a PhD in mathematics, so I’ve always been surrounded by a lot of educational excellence. By the way, I’ve also made it 45 years without ever having been in a fight or being arrested. I don’t share all of this to brag or boast as if I’m special or unique in some way. Instead, my point is the complete opposite. I’m not unique or different at all. Virtually every Black woman that I know has a background and life experience very similar to mine. For myself and my peers I have noticed that although we’re “accomplished” and have been able to navigate corporate America and life without evidence of any significant “anger issues”, this label somehow still seems to attach itself to what I would instead characterize as an assertive, bold, decisive energy that we often use to navigate a world that often seems to treat us with disdain.

While I can’t speak for all Black women any more than I can speak for any demographic group, these are my three top reasons why the label in my opinion is not just a silly myth but has become fundamentally offensive branding.

1. Black women often have to demand while others may be able to simply ask.

This simple fact is that people often respond differently to others based on factors like race, gender, income level, and age. After my husband’s recent medical procedure, he commented “You know….people respond so differently to you when they find out you’re a physician.” He explained that while the nurse was prepping him for his procedure, she asked him what he did for a living and when he responded that he was a physician, her entire demeanor changed immediately. She seemed to nervously finish working on him with a sense of urgency and announced that she would get the doctor in to see him right away (even though he hadn’t asked to see him). That didn’t surprise me and it really shouldn’t surprise any of us. It’s a simple fact that we interpret and respond to a situation based on our own lens (and that lens is often heavily distorted by our own natural biases and preconceptions). Where an “affluent looking” older white man may simply make a request and be responded to with the utmost of urgency; oftentimes, that same polite request coming from a black female may fall on deaf ears or even be ignored. I’ve personally been in many, many situations where I’ve had to put a little base in my voice and “go Defcon 4” (as I often refer to my consciously becoming more assertive in an interaction) to make it clear that I expect to receive the level of service or result I’m due. I don’t do it out of any innate “anger”. I just vehemently believe that my thoughts, requests, opinions, and ideas are as valuable as others’ and am comfortable responding as such. I’m also results oriented and have learned the hard way that sometimes you have to shock people out of their natural biases and prejudices to receive equal treatment.

Viewing this more broadly, I’m sure there is a Darwinian reality at play here in that over many decades of discriminatory treatment, we (as Black women) have certainly not survived and thrived by being meek, submissive, and compliant. Instead, being willing to fight when we may have wanted to flee and learning to face the world each day with a firm, impenetrable strength and assertive and bold voice I’m sure was key to our very existence. So, it probably shouldn’t be too surprising that as a group that’s survived years and years of discrimination, we’ve developed a bit of a thick skin. That thick skin from my perspective isn’t necessarily a harshness – it’s just a comfort level and familiarity with having to demand what others simply ask for.

The simple truth is that we all respond based on our perceptions and when white males/females make requests or comments they’re often viewed as more important, smart, insightful, urgent, etc. and yield superior results. Unfortunately, when black females make the same comments/requests, they’re oftentimes not viewed as important or valuable – hence the need many black women feel to correct that misperception.

2. Aggression is often viewed differently depending on where it’s coming from.

Invariably, when I receive poor service in a restaurant and ask to speak to a manager, it’s viewed as my being difficult, petty, or “angry”, but if a well-dressed white man makes the same request, he might be viewed very differently – maybe assertive, strong, or savvy. This bias is likely an indirect factor in the overwhelming disparity of promotions of African American females in corporate America. In the 2016 Fortune 500 listing of CEOs, only ONE is a black female (and she is scheduled to depart the list next year when she leaves the CEO position to take on a different role). Earlier this year, the Washington Post ran an article entitled, There soon could be no black female CEOs among America’s largest companies. The rarity of Black females in executive level positions is no coincidence, and it’s certainly not because they have some inherent leadership inferiority. (We need only review Trump’s mostly white male roster of cabinet picks for the latest example.) The reality is that one factor likely holding them back from flying up the corporate ladder is that comments, suggestions, recommendations coming from an African American female are oftentimes simply not viewed as positively or given the same credence as those coming from their white (often male) counterparts. So when Black women are in the boardroom and simply state a fact, firmly state a position, or staunchly defend a point, their comments may be much more likely to be interpreted as “angry” not because of the content of the message but because of the race and gender of the messenger.

3. Black women certainly have a right to be “angry”.

I too am not immune from bias so I always like to lean on facts. The reality is that Black females in America have been consistently discriminated against for decades – that is simply a fact.

· Only 2.8% of directors on Fortune 500 boards are black, Latina, or Asian women (as reported by Catalyst).

· Elle ran a riveting article entitled Why I’m Shocked a White Police Officer Was Convicted of Sexually Assaulting Black Women. Another article detailed how the rapist officer preyed on Black women specifically because he assumed no one would believe their claims so he seemingly raped at will (convicted of raping more than 13 Black women over a seven month period).

In the face of the overwhelming reality of discrimination that Black women face daily, many would argue that they certainly have a right to be angry. I think that Newton’s third law of physics applies to interpersonal dynamics as well. If some Black women have a demeanor that’s maybe a bit pensive, many could argue that that’s to be expected and may be a healthy defense mechanism given the past/current societal climate. But Black women in my opinion are far too diverse and varied to have their demeanor characterized as a group any more than any other demographic group. The Black women I know are far too busy to be angry. They invariably acknowledge the hand they’ve been dealt as a double minority and focus on playing to win. For me as a Black woman I wake up each day, not angry but grateful, exuberant, optimistic, expecting great things, determined and yes, prepared for battle – not looking for a battle, but nevertheless completely prepared. If others interpret that bold energy as “too much”, I guess that’s an adjustment they’ll have to make J. 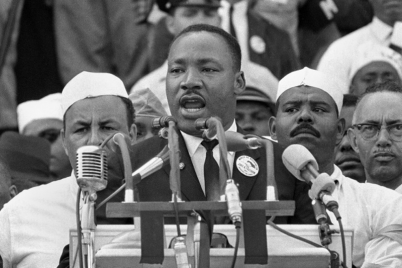 By Jonathan Capehart | The Washington Post Two years ago, the Equal Justice…

Kriston Capps, The Atlantic The prescient painter—who died at the age of…

By NICHOLAS KEUNG | The Star Whenever he is asked about his racial identity, Carl James…