“All Day and a Night”: A Film Worth a Thousand Words

All Day and a Night is an American dramatic film released on streaming service Netflix in 2020. Written and directed by Joe Robert Cole, the film tells the story of Jahkor (played by Ashton Sanders), his conviction and sentence to life in prison, and what his life was like living in the hood before he got there.

The movie provides great commentary on the culture of impoverished Black neighborhoods and the emotions, insights, and injustices placed upon the young Black men who come f 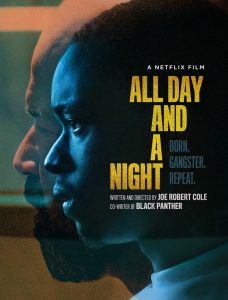 rom there. Not only was the movie well written and filmed, but it was also thought-provoking, emotional, and explores multiple themes that plague the men of the Black community.

“The judge told me this was the end of my freedom. But I can’t remember ever feeling free.”

This is one of the first things we hear protagonist Jahkor say. During the scene where he sits in court and listens to the crying mother of one of the victims yell that he is a monster, Jahkor sits emotionless, as if he knows he is a monster and has come to accept it. We hear about the hopelessness that Jahkor feels while living in his rough neighborhood and household.

This feeling of being stuck in your environment with little hope to achieve better is explored constantly throughout the film. As a kid, Jahkor hears his father (Jeffrey Wright), a known thug and drug addict, tell his mother that Jahkor won’t amount to anything great, regardless of school. His friend TQ (played by Isaiah John) makes a decent living by selling drugs and encourages Jahkor to do the same. He is always surrounded by people trying to convince him that there is little hope to make something better for himself without being a hardened criminal.

This is the driving force that made him carelessly commit the murder that landed him in prison. How can you throw a life away if you feel like you could never have one to begin with?  When he first arrives to the prison, he notes “It’s supposed to feel different in here than the outside. But back home, you just couldn’t see the walls.”

Another theme discussed in the film is the mass incarceration of Black men and the generational curses it creates. “I see faces of fathers from back home. They just disappeared. Now I know where the f*** they went. Teenagers that were arrested over a bag of weed that are now OGs, spent their entire lives in prison. Generations of men brothers, uncles, cousins, all of us. All of the same story on f***ing repeat.”

According to data collected by the NAACP, African-Americans are incarcerated five times more than white people, with the prison population being 56% Black and Latino despite the fact that they only make up 32% of the U.S population as a whole. The mass-incarceration of Black men has been an issue for decades and its effects have a negative impact on the Black community. 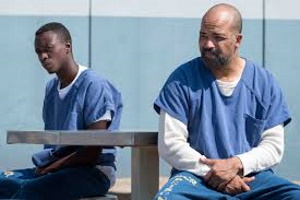 As we see in the film, Jahkor grows up with an abusive father who is mean after being in and out of prison. A father who he watched murder another man, degrade his mother, and buy drugs. A father he respected and looked up to. When he meets his father in prison serving the same life sentence as he is, his father tries to tell Jahkor to not see his newborn son because “men like us are not to be looked up to.” This only feeds into the other negative patterns seen in many families where many children grow up without fathers.

Not only do these behaviors get passed down through families, but also through the environment that someone is in. A few select scenes in the movie show how Jahkor’s actions are sometimes influenced by his peers.  “When violence is all around you, you get used to it. So you grew up learning certain rules.” For example, we see Jahkor hesitate when partaking in a robbery with TQ. While TQ is mercilessly brutal in beating one of the men they are robbing, Jahkor just hesitantly points a gun at the other man as he watches the beating — seeming as if he doesn’t belong there, and as if he is surprised by his friend’s violence.

According to The National Academies of Science, Engineering and Medicine, “Research over the past few decades on normal child development and on development of delinquent behavior has shown that individual, social, and community conditions, as well as their interactions, influence behavior.” Many children with the same background as Jahkor grow up with violence in and outside of the home. Just like how abuse is very prevalent within impoverished, urban neighborhoods, so is violence and murder. The film sets an example of how being surrounded by an endless cycle of violence contributes to the continuing of the cycle.

Lastly, one of the last themes in the movie is optimism. At the end of the film, after Jahkor decides to see his son, he walks back into the prison yard and says  “We are born in prison, but I am not your prisoner.” This uplifting quote is one that really stands out in this film. Although Jahkor is in a literal prison, many people may feel as if they are in a metaphorical one, just like the film shows with Jahkor. We see him experience poverty, violence, prejudice, and low opportunity all of his life and we see him have a strong desire to get out of it. This is the case for many people who come from the same circumstances. The irony is that Jahkor only realizes that he was never trapped only once he becomes literally imprisoned for the rest of his life.

“All Day and a Night” is a great film that tackles many complicated, sad subjects that plague many in the Black community. Feelings of hopelessness, mass incarceration and its effects, growing up in hostile environments, and the continuing of toxic cycles are all subjects that we see the main protagonist tackle before he finally sets himself free of all that held him back. It is not only a good movie but also a touching coming-of age-story. The important themes, well-shot cinematography, and poetic script and writing all come together to tell an important story about the hardships many young Black men face and the hope that they can overcome them.