Founded in 1966, NOW has earned itself the title of largest and oldest feminist advocacy organization in the nation.

NOW’s purpose is to take action through intersectional grassroots activism to promote feminist ideals, lead societal change, eliminate discrimination and achieve and protect the equal rights of all women and girls in all aspects of social, political and economic life.

The Pinellas chapter, established around 1970, provides equality advocates a place to think globally and act locally, according to Linda Darin, vice president of the Pinellas County chapter.

One of NOW’s six main goals is to promote diversity and end racism.

“Every year we participate in the MLK parade, I’m just realizing that it isn’t a venue to just talk to people… it’s not the type of venue that’s going to expand our communications. One on one communication will help with trust issues among different racial groups,” explained Darin.

Diversity within the organization is essential for the successful accomplishment of their remaining five goals: reproductive freedom including birth control and abortion, ceased violence against women, ensuring economic justice for everyone, LGBTQ equality and achieving constitutional equality. 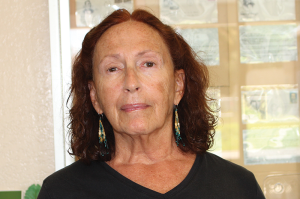 All of these issues affect every racial group.  “We’re all women. We have similar issues and I think it’s important that we work together on those issues because we are all impacted by them,” said Darin.

“Instead of constantly focusing on our own little groups, my heart’s desire is to see us all working together on the same issues that impact us all,” Darin continued.

The best way to start developing trust among various groups is just to show up and talk to people, believes Darin. Community members can expect to see members of NOW participating in more community events.

The Pinellas chapter invites all interested individuals and groups to join them on the second Wednesday of every month at 6 p.m. at the Barbara S. Ponce Public Library at 7770 52nd St N, Pinellas Park.

Darin encourages all women, especially young women, to “be what they want to be and not let race or class get in our way!”

Every January, NOW’s Pinellas chapter commemorates the Roe v. Wade decision, the decision that legalized abortion, with a rally in downtown St. Pete. This effort is to keep the fight for reproductive rights alive. All are invited to join.

Meet ups and meetings are free to attend. Membership fees are offered on a sliding scale starting at $15 yearly.

More information on current issues and events being held by NOW Pinellas County chapter can be found on Facebook at PinellasFLNOW.