My name is Eritha Akile Cainion, and with the support of the people, I will be your next District 7 City Councilwoman here in St. Petersburg.

The struggle for the rights of black people in the U.S. to participate in the electoral arena is one that is ongoing.

In the 60s, throughout this country, black people were engaged in a fierce movement to gain equal rights under U.S. law, one of the most important rights being the right to vote.

It was a struggle that threatened violence and death on black people, especially those within the Deep South. By the time we had achieved the ability to vote, the U.S. government had assassinated our leaders and destroyed our black power movement, leaving us nothing to vote for.

The U.S. government wouldn’t stop there.

Over the decades, the government revealed more tricks up their sleeves that served as black voter suppression, which includes the voting restrictions placed on convicted felons.

Statistically, the majority of people impacted by this setup have been black people.

Not because there is something wrong with black people — like we can’t stop committing “crime” — therefore we are convicted at a higher rate than white people.

It is by design that we are the ones who bear the brunt of this restriction. It manages to keep a sizable amount of our community from being able to exercise political power at the polls, especially black workers who are often rendered voiceless throughout the elections.

Recently, the people of Florida voted in favor of restoring the right to vote for those who have been hit with the “felon” label.

Despite overwhelming support to restore this right, the Florida legislature has advanced a bill that will essentially veto that vote.

And who will pay the highest price? The working class black community.

Take a walk through St. Pete’s south side black community.

During my run for office in 2017, almost every door I knocked on and a black man answered, he told me he would support me, but he couldn’t vote.

I was primarily raised by my dad, who was a single father for most of my upbringing. He’s a hard working black man who did everything he could to make sure his daughters were fed.

My father is one of those men currently ineligible to vote.

This is large-scale voter suppression of our community; so despite our battles and the lives we’ve lost in the process to obtain these rights, we have never truly been able to exercise them.

Working class black communities throughout Florida have never been able to use this so-called right to vote based on these limitations that have been imposed on us historically and presently.

When I’m elected, I’m going to use the position I hold to fight for the immediate restoration of ex-felons’ rights. We will wage a massive campaign for automatic restoration of voting rights — no strings attached. This will return political power back to the black community!

Honestly speaking, if the status quo could avoid people voting altogether, they would. That’s why most people don’t know about these voting obstacles at all. When we’ve mentioned to people outside of St. Pete how the local nonpartisan elections have a primary and a general election, there’s always a look of bewilderment because it’s already abundantly clear what kind of issue that poses for the black community.

Here we have a situation where black people make up something like 23 percent of the city’s total population. Our city-wide representation is supposed to come from those who represent us in a district; however, the district ultimately doesn’t get to choose who they want to represent them.

On top of this, we have to deal with the newly gerrymandered setups in what used to be primarily black districts being turned into white ones.

Everywhere we turn there’s a roadblock in front of us, preventing us from being able to use the electoral arena to our advantage. Our voices are never heard. Our interests are never realized.

The big money developers, the corporations who buy their favorite politicians, they get to take an election with ease.

Not this time around.

When we win, we’re going to return the districts to their original zoning pre-gerrymandering, and we’re calling for one genuine single-member district general election – winner takes all.

The “Make the Southside Black Again” electoral campaign to elect me, Eritha Akile Cainion, for District 7 City Council is a campaign that represents a future for the black community, where we have economic and political power, and we are no longer threatened with the possibility of being gentrified out of existence.

This future can be yours. It must be yours!

Join this campaign that’s fighting for the restoration of felons’ rights and an end to the voter suppression of the black community!

Being a black woman in America

Dear Editor: “The most disrespected person in America is the black woman. The most… 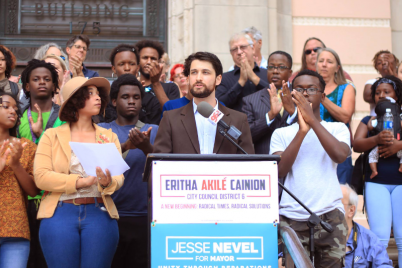 Why I am running for mayor: Unity through reparations

Dear Editor: I am the reparations candidate for mayor on the Aug. 29 ballot. Or if…