Earlier this month, streaming service HBO Max shelved the classic film Gone with the Wind for two weeks, saying it shows “ethnic and racial prejudices.” The service considers the 1939 film and its depiction of slaves during the Civil War distasteful amid a stormy atmosphere where thousands of protesters flood the streets daily to decry systemic racism in our country.

Now back up and streaming, HBO Max added a four-minute introduction, warning that the film “denies the horrors of slavery,” and added an hour-long panel discussion at the end to contextualize its complicated legacy.

While this seems a fair compromise, some factions stoutly believe the film — and other films like it, blatantly debase African Americans — should be shelved indefinitely.

This is a brazen stand, and in the end, this practice would do more harm than good.

Based on a novel by Margaret Mitchell, the film is set in the American South during the Civil War, when slavery was in its death throes. The heroine Scarlett O’Hara, who takes over ownership of her family’s plantation Tara after the death of her mother, then father, does whatever she can to survive the war and the advancing Union troops, even if she has to “lie, steal, cheat or kill.”

British actress Vivien Leigh is resplendent as the narcissistic and conniving southern belle O’Hara, making us thoroughly believe that with every bat of the eyelash and every “fiddle-de-dee” she spouts, it was a role she was born to play. The same can be said of leading man Clark Gable as the rugged Captain Rhett Butler, with his devil-may-care demeanor an affected southern gentleman accent, he shines just as brightly as Leigh on the silver screen in this epic.

But of course, no one is trying to shelve or ban this film because of these performances. It is the portrayals of the enslaved at Tara that some deem nothing less than cruel caricatures and deeply offensive. And it goes without saying that though the film makes the Old South look noble in its fading grandeur, there is nothing noble in the enslavement of human souls — not in 1939, not in the 1860s, not ever.

But remember, this is a work of art, and all the varied pieces must come together to form a coherent, spectacular whole. If you make a film set in the Old South during the Civil War, are you really wrong to show that slavery was a part of daily life? Yes, if you are not acknowledging the brutalities of chattel slavery that kept Miss Scarlett in her pressed petticoats.

“It is not only a major document of Hollywood’s racist practices of the past but also an enduring work of popular culture that speaks directly to the racial inequalities that persist in media and society today,” said African-American film scholar Jacqueline Stewart in the newly added introduction.

And just as Leigh and Gable turned in never-to-be-forgotten performances — along with Olivia de Havilland as Melanie Hamilton, Scarlett’s kind sister-in-law and rival; and Leslie Howard as Ashley Wilkes, the object of Scarlett’s obsession — so did the actors who played the roles of Tara’s enslaved. Oscar Polk played the level-headed Pork, Butterfly McQueen, the high-strung Prissy and Hattie McDaniel the matronly Mammy.

Pork (Tom) is earthbound, loyal, and tries to keep the household grounded — like when he’s gently disclosing to Scarlett that she’ll need a princely sum of $300 for the taxes on Tara.

At the other end is the excitable, squeaky-voiced Prissy (pickaninny, which is in the coon family), who delivers one of the movie’s most famous lines. In one scene she has assured Scarlett she knows how to deliver a baby, but when later called upon to help when Melanie goes into labor, she admits the truth by screaming out, “I don’t know nothin’ ’bout birthin’ babies!”

The headstrong Mammy speaks her mind to fellow servants and white people alike, dispensing advice, commands, and even kind words at will (Mitchell didn’t bother to change the name of this character from her stereotype).

In one scene, Mammy boils the clothes of a lice-ridden Confederate soldier and orders him to scrub himself down with strong lye soap, or she’ll do it herself. In another of the more poignant scenes, she soothes Scarlett after the death of her father has become the latest misfortune.

“You been brave so long, Miss Scarlett. You just gotta go on being brave,” Mammy said in her own heartfelt but willful way.

McDaniel’s performance was such an integral part of the film’s appeal that she won the Oscar for Best Supporting Actress in 1940. She became the first African American in history to win an Academy Award. Unfortunately, at the Oscar ceremony in Los Angeles, she was not allowed to sit with the rest of the cast and was placed in the back.

During the Black Lives Matter Movement, where there are hundreds of protests to end racism throughout the country, naturally, these subservient performances will be viewed in a different light. But it’s not like black actors had a wide range of roles to choose from for most of the 20th century.

Not only could they never hope to score any lead roles, but they were also restricted to an extremely narrow spectrum of characters — it didn’t matter in what era the films were set. Maids, cooks, nannies, house servants, laborers, stable hands, field hands, prisoners, jungle savages, and, of course, slaves were the standard shoes they’d be asked to fill on the movie set. We can be sure that given their choice, these film actors — many of whom had honed their acting skills on the stage — would rather not play a grinning, groveling or grunting sub-human.

But did this stop African-American actors from turning out stellar performances? McDaniel, Polk, and McQueen took on these roles and embraced them, made them their own, and in the process, elevated the entire film.

“Watching Gone with the Wind can be uncomfortable. Even painful,” Steward said. “Still, it is important that classic Hollywood films are available to us in their original form for viewing and discussion.”

In the end, a work of art is a sacred, living thing that deserves its immortality. A film like Gone with the Wind and all the masterful performances that comprise it, by both black and white actors, should be preserved for generations to come — even if we have to take some of it with an enormous grain of salt. What we should never do is seal it shut and bury it.

Hundreds of people have donated more than $33,000 to help a Baltimore mother—who made… 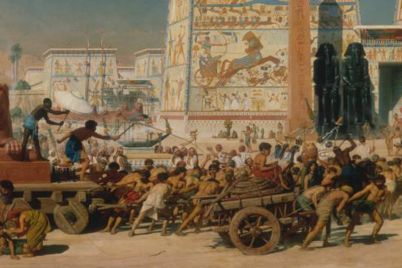 A huge tableau, painted on a mural scale more than 10 feet wide, provides a highly…