Well, it didn’t take long to find out what the true intentions were with all the Kanye and New Birth circus.

I must say I commend Pastor Bryant for not only his stand but also his decision to contact Mr. West and detail that after finding out that Mr. West at his next “Sunday service,” decided to announce that he would promote and indorse President Trump in his 2020 bid to become re-elected, Pastor Bryant told him that he would use the very “Large” donation to in turn donate to one of the HBCUs in Atlanta where Mr. West’s mom was a professor.

To me, it was an easy decision. There was too much heat that followed everything that occurred in that one day that the only real true spiritual solution was to do just that.

He stated that he didn’t make the decision alone but that he met with the leadership of the church and collectively, they came to this decision.

Had he not done anything, I believe that this would have snowballed and they could have lost even more saints.  Little known to me and probably all of us is that the membership went from well over 20,000 down to less than 1,000 according to sources.

This brings in a chance to apply scripture to all this and could be used as a warning to all of South St. Pete’s “mega or bigger” churches that celebrity has no place in God’s Kingdom and He will bring the leadership and the “Empire” down.

34 And the word of the Lord came to me, saying, 2 “Son of man, prophesy against the shepherds of Israel. Prophesy and say to them, the [spiritual] shepherds, ‘Thus says the Lord God, “Woe (judgment is coming) to the [spiritual] shepherds of Israel who have been feeding themselves! Should not the shepherds feed the flock? 3 You eat the fat [the choicest of meat], and clothe yourselves with the wool, you slaughter the best of the livestock, but you do not feed the flock. 4 You have not strengthened those who are weak, you have not healed the sick, you have not bandaged the crippled, you have not brought back those gone astray, you have not looked for the lost; but you have ruled them with force and violence.

11 For thus says the Lord God, “Behold, I Myself will search for My flock and seek them out. 12 As a shepherd cares for his sheep on the day that he is among his scattered flock, so I will care for My sheep; and I will rescue them from all the places to which they were scattered on a cloudy and gloomy day. 13 I will bring them out from the nations and gather them from the countries and bring them to their own land; and I will feed them on the mountains of Israel, by the streams, and in all the inhabited places of the land. 14 I will feed them in a good pasture, and their grazing ground will be on the mountain heights of Israel. There they will lie down on good grazing ground and feed in rich pasture on the mountains of Israel. 15 I will feed My flock and I will let them lie down [to rest],” says the Lord God. 16 “I will seek the lost, bring back the scattered, bandage the crippled, and strengthen the weak and the sick; but I will destroy the fat and the strong [who have become hard-hearted and perverse]. I will feed them with judgment and punishment.

How amazing that this occurred over 2,000 years ago but it’s so applicable today.

I will break this passage down and show the correlation with today’s church and show how it explains why the communities are in the state they are in today. 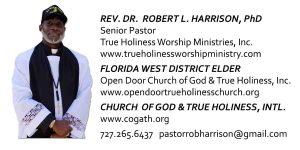 PS – Please support the Golf Tournament we are co-sponsoring with Chief Holloway and SPPD.  It’s a first! Please look at the flyer for details.

Praise the Lord. I thank my Lord and Savior Jesus Christ for allowing me to see great…

Living in an age of lies, Part 3

Praise the Lord Saints. They end up using the Bible only to stop someone using the…

Praise the Lord Saints. It’s me again but this time in a different capacity. Some that…