ST. PETERSBURG — Deloris Green-Foster admits she wasn’t sure how her grandson would support himself by making music.

“He was just about to graduate from high school, and I wanted him to get a job,” she said. “But he believed in his dream.”

Today, her grandson Rod Wave is not only a local celebrity and has made a name for himself in the world of hip hop. And now, he wants to give back to the community that helped him get his start. 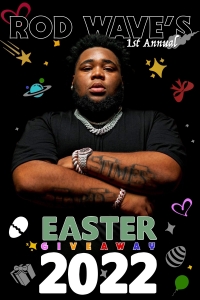 Last Saturday, the Lakewood High School alum gave away $25,000 worth of gas at the Sunoco gas station in the Skyway Marina District. Hundreds of people showed, waiting hours for up to $50 worth of gas.

This Saturday, however, is all about the kids. On April 16, he will give away bikes, food, and Easter baskets to children from 1-6 p.m. at the Lakewood Junior Spartan Complex, 4801 31st St. S.

Green-Foster, who the superstar calls Nana, said Green would also have face painting and bouncy houses for the children to play.

“He just wants to say thank you to the community that supports him,” she said. “I am so proud of him. His dad gave him his first microphone, and that was it.”

To think back to how he started and the support the city gave him, Green-Foster said, it makes it easy to understand why he wants to help as many as he can in any way he can.

“He was a student at Lakewood High School making his songs, and his friend put them on YouTube,” she said. “People liked it, and he started selling his CDs for $3, and people would buy them. This is his way of saying thank you.”