U.S. Army and Air Force veteran Louis Williams was one of 68 vets who flew out of St. Petersburg-Clearwater International Airport at 5 a.m. and took a whirlwind tour of military monuments in Washington, D.C., before returning at 8 p.m. Williams is seen here with Honor Flight ‘guardian’ Lynn Werner.

ST. PETERSBURG — Louis Williams, a veteran who gave years of his life to the U.S. Army and Air Force, enjoyed a celebration of his service on June 14 in one of the famous Honor Flights to Washington, D.C.

The St. Pete resident was one of 68 vets who flew out of St. Petersburg-Clearwater International Airport at 5 a.m. They were treated to a whirlwind tour of military monuments before returning at 8 p.m.

The homecoming was spectacular, said Williams, 84. A parade surprised the veterans when they got off the plane.

“It was phenomenal,” he said. “They had bands, horns, people who had been on previous trips — you name it.” 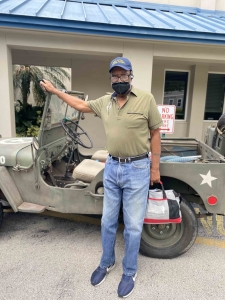 Getting in the mood for military memories, Louis Williams poses by a jeep during the Honor Flight orientation at a Palm Harbor church.

Also awaiting them were mailbags containing notes and letters of appreciation, many from children from various schools. “They were so touching,” Williams said.

Honor Flights have been in existence since 2008. They honor veterans with an all-expenses-paid trip to the nation’s capital. Volunteer “guardians” go along to ensure the veterans’ comfort and safety. Many thousands of veterans have made the trip. Information about the program and an application to take an Honor Flight are found at honorflightdfw.org.

“I would tell veterans it’s an experience that affords them an opportunity to see some things they will never see again in most cases. The Vietnam vets, they should all go to the wall because they did a marvelous job.”

Altogether, Williams spent more than 40 years in public service. Besides 13 years in the military, the Gibbs High School graduate was a police officer in St. Petersburg and Tampa, a substitute teacher in Pinellas County Schools, and for 31 years a postal service employee.

“I wanted to coach high school basketball, but it was a closed society,” Williams said. “What I did, I subbed around the county for around four years and then worked for the postal service.” The postal service is the job he retired from after working twice in St. Petersburg, twice in Tampa and once in Miami. 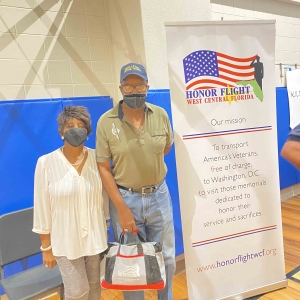 Louis Williams and his wife Jackie contemplate the Honor Flight.

Williams said he moved around in the postal service because “times weren’t favorable if you spoke up for yourself. I was always one to speak up. I could feel the hammer getting ready to come down, so I would leave,” Williams said. “I was what they called a rabble-rouser.”

That inclination to go against the established order earned him attention among the St. Petersburg police. Williams worked for the department for about three years, from 1959 through 1961.

Williams said that he and Richard Davis were the first African-American officers to arrest a white man.

It was something that was not done during St. Petersburg’s Jim Crow era.

“I think he just said the hell with it, and he arrested somebody anyway,” said Goliath Davis, a former St. Petersburg police chief, and deputy mayor.

Said Williams: “This guy was a disc jockey from Philadelphia. He used to come out to 22nd Street and upset some of the women, one woman told us. When we saw him, and he saw us, he took off. He was driving within the speed limit until 16th Street. Then he headed toward Central Avenue, speeding. We stopped him at 16th and Third Avenue.

“[Sergeant] Sam Jones was totally against it. I told him too many people had seen us to back down at this point. We took him to jail, and when we got there, it was like a cheering squad on the back porch.’’

He knew and worked with members of The Courageous 12, the dozen Black officers who successfully sued the City of St. Petersburg in 1965 to win equal treatment within the police department. Williams had moved on by the time The Courageous 12 had filed their suit.

But he always kept in touch.

“I have a real good memory of him because he and I talked all the time. Anything related to the Courageous 12, he would always show up,” Davis said. 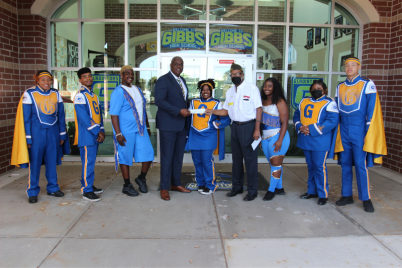