Before Sales took the stage at the Allstate campus of St. Petersburg College, Dr. Wilmer Leon III, political commentator and nationally syndicated radio host, read the moving poem “The Slave Auction” by Frances Ellen Watkins Harper because he said “for most of us in this room, this is how it all began…if you’re going to truly appreciate and absorb what [Sales] has to present, then this is where he have to start.” 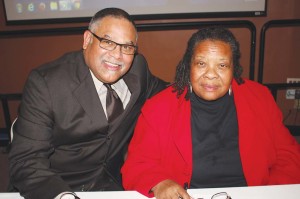 Sales was educated at the Tuskegee Institute in Alabama and became involved with the Southern Freedom movement. While protesting a whites-only grocery store in August 1965, she and some of her fellow activists were arrested and jailed for six days.

Sales and a few others, after their release, went to a nearby store to purchase sodas, where she was confronted and threatened by Tom Coleman, who was armed with a shotgun. When Coleman leveled his gun at Sales, Jonathan Daniels, one of Sales’ companions and a white Episcopal seminarian, pushed her out of the way and took full brunt of the gun blast. He was killed instantly. Coleman also shot Father Richard Morrisroe, a Catholic priest and another of Sales’ companions that day.

Coleman claimed, according to Sales, that he acted in self-defense and also acted in an official capacity as deputy in protecting the life and property of the white female storeowner. When Coleman stood trial for the murder, he was acquitted by an all-white jury of his peers.

Sales went on to teach courses on the C0ivil Rights Movement and African-American women’s history at the University of Maryland before becoming affiliated with the National Women’s Studies Association, and continues to be a social activist.

Addressing the crowd, Sales said she wanted everyone that night to think about three questions: “Where have we come from, where are we going and how do we get there? And by ‘we’ I want us to think about it in two perspectives: as African Americans and as a nation.”

Though it was termed the “Civil Rights Movement” that she joined as a student at Tuskegee, Sales said she and other African Americans were really struggling for human rights and human dignity. The fact that it was reduced to “civil rights” is a problem, she said, as it explains “a lot of why we are where we are today as a community under siege.”

She recalled while working her first day in Lowndes County, Ala., famed activist Stokely Carmichael took African Americans to the courthouse to register to vote. The white sheriff, she recalled, had threatened him, saying if he didn’t get out of here he’d be in hell tonight. Sales noted that Carmichael, not batting an eye, shot back with, “Well, I’ll tell you one thing, hell will be integrated tonight!”

“For the first time in history, black people who were sharecroppers, maids… who could not read,” she said, “had access to the public microphone… it was a revolutionary process that turned the black community upside down, as well as the white community.”

She said when black women in Montgomery, Ala., in the 1950s decided to boycott the buses; it was a working class revolution.

“It was really working class black people who changed the face of Montgomery,” she stated.

“That’s very important to remember because if we don’t understand the gains,” she affirmed, “the incredible gains that we achieved as a people, our expectations of what we can accomplish will always be low.”

It was not just the economic but also the social change that was significant, she said. African Americans went from being pariahs and “impure people” who were not worthy of using certain bathrooms or dining at certain lunch counters to people who had access to facilities like everyone else.

“We wanted to be fully human,” she stressed, “we wanted to have mobility and access like every other race in this country.”

Sales said when she thinks about Dr. Martin Luther King, Jr.’s famous “Mountaintop” speech, she believes he was not talking about jobs, college degrees or positions; she believe he was talking about a higher level of consciousness, where you came to see the world differently, your relationship with each other and your relationship with God. The mountaintop was calling us to a new place of being, she explained, and Dr. King imagined that with this new sight we would create the new world.

She stressed that she and others in the Southern Freedom movement were “not high on prosperity gospel” but “high on liberation gospel,” and went on to say that many African Americans lost sight of the true destination.

She denounced racist America’s efforts to keep the black community down, citing policies in the 1970s engineered to break up the black family, Ronald Reagan’s creation of the “myth” of the “welfare queen,” and the portrayal of African Americans as drug addicts, though statistics show that 80 percent of drug users in this country are white.

This portrayal gave the world permission, she said, to incarcerate our children, to devastate our families because at the heart of that image was an image of a people who were immoral who did not deserve the fruits of democracy and citizenship. She then called out the “empire” of televangelists who made millions and the African Americans that allowed them to become their spiritual leaders.

“Why is it that you would turn to people who had created the system of enslavement and segregation,” she asked, “why would you turn your spirits over to those people today? We need to step back a moment and take a deep breath and ask ourselves ‘how come’ and ‘why?’”

She noted the lengthy sentences African Americans were routinely given for drug-involved crimes, and then mentioned a growing heroin addiction problem in white communities from New England down to North Carolina and the West.

“Now, suddenly, drug addiction is an ‘illness,’ she said with sarcasm.” Not a crime, but an illness. So money is being spent on many levels to fight this growing illness. The people who are using heroin, they’re not criminals, they’re ‘misunderstood.’ They’re ‘struggling to find themselves.’ This is what we’re up against.”

Even the black school system is a target, she said, citing that in 1962, 38,000 African-American teachers throughout the South were fired. And in the 1970s you had black kids never having a black teacher, she said. This was a severe disruption in intergenerational continuity.

“They don’t know us and we don’t know them,” she said. “That’s devastating to a people whose backs are up against the wall.”

Referencing police brutality against African Americans, she noted that she has been around the country and has documented over 2,000 “state-sanctioned murders,” as she refers to them, since 2007.  Some policemen have served in the military and even been involved in overseas conflicts, she said, and they have a tendency to view African Americans as enemy combatants and employ the same strategies and tactics they would use in war, such as a triangle choke hold.

“It doesn’t matter if you’re male or female,” she said soberly, “the police have declared war on the African-American community.”

Segregated housing is another dangerous area that no one is talking about, she said, as the pushing of African Americans out of cities and farther into isolated suburban areas—where they don’t have access to jobs or transportation—is a pressing issue.

She pointed out that the very survival of African Americans depends on them coming out of the fantasy and dealing with the realities of the world we live in today, adding it is a “very urgent period in African-American history.”