As we celebrate 50 years of the Super Bowl—football’s ultimate contest—we take a look back at some of the sport’s notable firsts.

Since professional football was integrated decades ago, it has featured no end of standout African-American players over the years. Running backs such as Gale Sayers, Earl Campbell and the electric Barry Sanders; receivers such as Lynn Swann, Jerry Rice and the superb Marvin Harrison; quarterbacks such as Doug Williams, Warren Moon and the multi-talented Cam Newton…the list goes on and on. And when many pro teams balked at hiring African-American coaches, men like Art Shell, Mike Tomlin and Super Bowl champ Tony Dungy proved they were up to the task.

But before any of these players or coaches could even take their place on the field or on the sidelines in a pro game, things had to change. These pioneers helped to break down pro football’s color barrier and ultimately integrate America’s most popular sport. 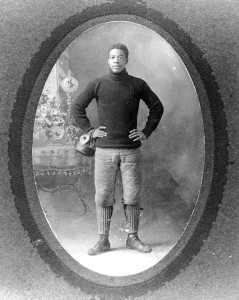 Follis entered the College of Wooster in 1901 where he could’ve lent his athletic talents to the college’s squad, but instead opted to suit up for the town’s amateur football team, the Wooster Athletic Association in Ohio. The explosive play of the six-foot, 200 pound halfback soon earned him the nickname “The Black Cyclone.”

In 1902 and 1903 Follis played for the Shelby Athletic Club in rural Shleby, Ohio, and the following year signed a contract with the club, later the Shleby Blues. As soon as he signed he officially became the first African-American football player. Though the sport allowed Follis to join its ranks, he still had to face taunts and slurs from fans because of his color. And it didn’t end with merely words, as opposing players routinely targeted Follis with rough play that sometimes ended with injuries. In 1906, on the Thanksgiving Day game, Follis suffered a career-ending injury.

A two-sport athlete, Follis turned to baseball, which he had played during the spring and summer, for Wooster College and the Ohio Trolley League. Only allowed into the segregated leagues, he played catcher for the Cuban Giants, a black baseball team. After playing in a Giants game in 1910, Follis came down with pneumonia and died at the age of 31.

It is worth noting that when Follis joined the Shleby professional football team, a teammate of his was Branch Rickey—the future Brooklyn Dodgers general manager that would make history of his own by signing Jackie Robinson to a Major League baseball contract in 1947, breaking the sport’s color barrier.

Pollard grew up in Chicago and in high school was an accomplished running back, track star and baseball player. Playing football briefly for Northwestern, Harvard and Dartmouth, he received a scholarship from the Rockefeller family to attend Brown University in Rhode Island. There he led his team to the 1915 Rose Bowl game.

Pollard then signed to play for the Akron Pros in the American Professional Football Association and led Akron to the championship in 1920. Even after he was named head coach in 1921, he continued to play alongside his men. In 1922 the APFA was renamed the National Football League (NFL), making Pollard the first African-American coach (and one of its first players) of the NFL.

He went on to coach NFL teams in Indiana and Milwaukee until 1926, when the NFL instituted a ban on players of color. Pollard responded by creating an exhibition team of black players and even challenged NFL teams to compete against his squad, but the challenged was never accepted. The segregation in the NFL lasted until after World War II.

A great running back, Pollard put his head down and broke through the NFL’s color line—but he was not alone. Many consider Robert “Bobby” Marshall, along with Pollard, to be the other African American to first play in the NFL.

Marshall entered the University of Minnesota from 1901 and played the position of end. He played so superbly, in fact, that his blocking was responsible for giving the Gophers the tying touchdown against their rivals, the University of Michigan in 1903. Though he played the position of end, he kicked a long field goal to beat the University of Chicago, which made headlines (the exact length of the kick has been debated, as some say it was a 48-yarder, while others claim it sailed up to 60 yards). Marshall was the first African American to play in the Big Nine Conference (later the Big Ten).

Starting in 1920, he went on to play for the NFL’s Minneapolis Marines and the Kelley Duluths. 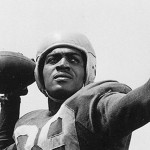 A stout running back that bulldozed his way to almost 2,000 rushing yards in his college career at UCLA, Washington was one of four African-American players on the 1939 UCLA Bruins football team, the others being Woody Strode, Ray Bartlett and a gifted all-around athlete by the name of Jackie Robinson. After Washington graduated from UCLA, legendary owner George Halas tried to sign the African -American star with the Chicago Bears, but the other NFL owners blocked him. Washington played instead in the Pacific Coast Professional Football League for the Hollywood Bears in the 1940s.

Things changed in 1946. With the Cleveland Rams moving to Los Angeles, the team wanted to play in the publicly owned Los Angeles memorial Coliseum, which put pressure on the team to integrate, since black and white taxpayers had paid for construction of the mammoth stadium. The team signed Washington in March, and Washington’s teammate Strode followed shortly after, being singed in May of that year.

Due to having to undergo surgery on both knees prior to his first NFL season, Washington’s stint in the league only lasted three years, but his impact on the game’s modern era was far-reaching. 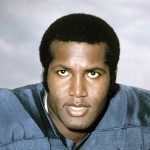 Though black players became more common in professional football in the years following the sport’s integration, there was one position at which there was a glaring shortage of African Americans: quarterback.

Drafted in the eighth round by the American Football League’s Buffalo Bills, Harris joined fellow rookie O.J. Simpson in the backfield. Before the AFL merged with the NFL, it was known as having more liberal personnel policies. Though Marlin Briscoe of the AFL’s Denver Broncos had been the first to start a game at quarterback in 1968, it was Harris in 1969 that was named as a team’s starting quarterback—before then no other black quarterback had started Week 1 in either league.

Though there were several black players at such positions as running back, wide receiver and defensive back during Harris’s playing days, quarterback was a position few coaches looked to African Americans to fill. Harris himself admitted that he was encouraged to switch positions in high school and even in the pros, and revealed that some black quarterbacks switched because they had no choice. Black players still were susceptible to the sting of racism, as Harris was no stranger to booing and even hate mail

In 1973 Harris joined the Los Angeles Rams and was named the team’s starting quarterback by Week 3. That season ended with Harris leading his Rams to the NFC Championship game as the starter and again in 1975, becoming the first African-American quarterback to accomplish the feat.