ST. PETERSBURG – Sitting in Central Station Barbershop & Grooming on a Sunday afternoon, you’ll hear the solutions to all the world’s problems. Finance, relationships, recidivism —no topic is too complicated for owner Antonio Brown and his clientele.

“I’m basically a sounding board for a lot of people when they come in, so I have to be well-rounded and able to converse with many different ethnicities being that I cut multicultural hair, all textures,” said Brown.

“We can do anything because we know about the scalp and all of the medicinal aspects of hair, how to treat it,” said Brown about himself and his three employees: David Lee, Keith Austin Ragsdale and Dar’rell D. Nash. “We can do anything from an edge to a relaxer.” 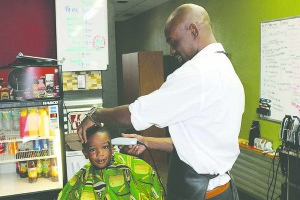 Carson Goslin, 3, is a regular at Central Station

Born and raised in St. Pete, Brown graduated from The Boca Ciega High School in 1999 and soon after became a father. Instead of going away to college, he stayed home to help raise his son Jaelyn.

Taking a lucrative job at a mortgage investment firm, he worked in customer service and the telemarketing department and soon became an assistant supervisor.

“I was 19 and doing pretty well for myself,” he said, noting that his time in customer service was like receiving a degree in public relations.

Being as young as he was and with a pocket full of money, most people would have settled in and grown complacent. Not Brown. He knew he had more potential that working for someone else and decided that he was going to run his own business.

“One day I just felt like that wasn’t my purpose or my calling and decided I wanted to do something different with my life.”

Always in the back of his mind was the scene from the film “Boyz n the Hood” where Cuba Gooding Jr.’s character bonded with his father while he cut his hair. He knew from the first time he watched that movie as a child that if he had a son he would be the only one cutting his hair.

“I started cutting on my son. He’s never been to another barber.”

Brown first used himself and his son as guinea pigs and then ventured off to friends. Eventually, he decided to go back to school and become a master barber.

Raised by his mother who had him at an early age, the two of them basically grew up together.

“She exposed me to a lot. I grew up kind of fast,” Brown recalled. “Being that I was the only child, we had to go through a lot of struggles together.”

His mother, Reba Brown, taught him the value of hard work and was dedicated to raising him up to be a respectable young man.

Growing up without a father, he vowed to never let his son experience the hardship of being fatherless. He and his child’s mother stayed together for the first two years but went their separate ways. His son, however, has been by his side for the last 17 years.

“I struggled through it and I made it work,” Brown said. “He really made me wake up and get my life together and want to cut hair and own my own business.

“I did a lot of observation… I knew how I wanted to manage my own shop.” 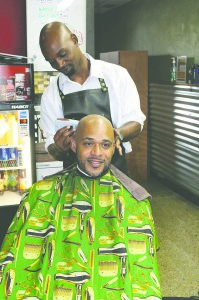 Barbering is a very competitive business, and a lot of trial and error is involved. Brown said people will sometimes give you advice not in your best interest so “you have to go with what works for you.”

Being a self-motivator, he studied and researched his craft. Brown not only focused on his skills, he focused on the business.

“It’s key for me to be more of a businessman than a barber,” he said, revealing that he has plans to franchise his idea and open up a string of shops that will employ workers who want to obtain financial freedom.

Brown advises all barbers fresh out of school to find a shop where there’s a helpful family-friendly environment that is conducive to learning. And for those looking to go into business for themselves, he advises them to have a vision and workable plan.

“Be willing to accept failure, frustration and hardships,” he said. “A lot of people will doubt you when you want to put your vision into play, but the biggest thing is you not letting people get to you to the point where it discourages you.”

Brown has a passion to inspire and motivate others to realize their potential. That’s why he and a committee of 14 business and community leaders are in the process of organizing the Black Excellence Expo and Job Fair.

They are looking for businesses to participate that offer apprenticeship programs and internships and who are prepared to hire on the spot. Participants are encouraged to bring a resume and come ready to work.

The goal is to have more than 100 vendors and conduct workshops and seminars on topics such as credit restoration, tax help, how to become a landlord and even have a discussion on medical marijuana.

Browns feel like it’s a gift to be able to actually pull together 14 people with very busy schedules and have a meeting of the minds.

The Black Excellence Expo and Job Fair will take place on Nov. 5 at Pinellas Technical College. More information will be provided in the coming months.

Central Station Barbershop & Grooming’s summer hours are from 8-6 p.m. Monday through Saturday and noon to 6 p.m. on Sunday. Appointments can be made at StyleSeat.com or by calling (727) 317-3701. 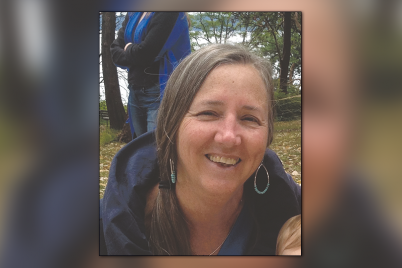 It stinks in the sink 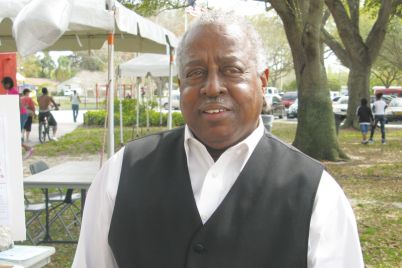 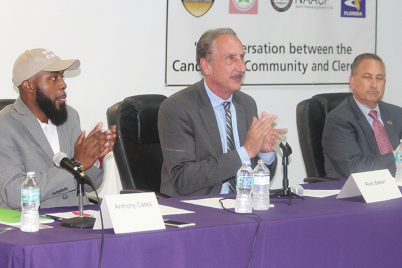