ST. PETERSBURG – The City of St. Petersburg, a segregated, race-based stronghold in the 1950s and 60s, this week honored a cohort of black police officers’ “faith” and “resilience” in fighting and beating back segregated policing with a memorial plaque in the main lobby of the new police building.

Leon Jackson, the surviving member of the cohort that came to be known as The Courageous 12, sat front and center during the ceremony on Tuesday and stood to a round of applause from the standing-room-only crowd as Mayor Rick Kriseman offered a “special recognition” of Jackson for being present.

The mayor, who hired the second black police chief in the city’s history when he brought on Anthony Holloway from Clearwater, said “faith” and “resilience” were good words, along with “courage,” to describe what the Courageous 12 exhibited in filing and winning a years-long lawsuit during the tumultuous civil rights era.

Because this is a story about honoring and memorializing black police officers, a rarity in that era, people should know their names. Along with Leon Jackson, 11 other African-American men, fathers, brothers, husbands and community members fought together, pooling their own money to file and win on appeal a lawsuit that ended segregated policing in the city.

During the ceremony, the city played a video during which Jackson brought Holloway up to speed about The Courageous 12, a history Holloway said he’d never heard about.

Jackson came to the department in 1963. Though they were sworn officers carrying a badge and a gun, he and his comrades were prohibited from patrolling white neighborhoods and from arresting white people, no matter the circumstances.

The men experienced segregated facilities, workplace hostilities, couldn’t work inside of the police building and had no chance of earning a promotion.

Fed up with the madness, 12 of the then 15 sworn black officers raided family budgets, pooled their dollars, and hired civil rights Attorney James B. Sanderlin to file a lawsuit in 1965 charging racial discrimination.

After losing in the first round of the court battle, a period when the black officers faced threats of violence to themselves and family members, the 12 officers again managed to scrape substantially more money together to file an appeal.

Their charges were upheld, and they won a court-ordered decision in 1968 to end discriminatory treatment and segregated working conditions, paving the way around the country for other so-called minority law enforcement persons experiencing comparable discriminatory practices and segregation to work under fairer and more equitable conditions.

Because of this notorious history, and the city government’s apparent decision to say and maintain never again, the current regime has declared that all officers seeking management-level positions “shall” read and understand the court order declaring an end to segregated, discriminatory policing.

Fifty-one years after that 1968 decision, during which there were less than 25 sworn black officers, and only one sergeant, there are now, as of August,  81 black officers, including 19 females and 62 males, the chief of police, one assistant chief, two majors, four lieutenants, and six sergeants. Two of the black lieutenants are female and two of the black sergeants are also women.

By contrast, among the 411 sworn white officers, there are 37 sergeants, eight lieutenants and two assistant chiefs.

After the video, the plaque bearing the names and photographs of the men was placed on the western wall facing the entrance to the main lobby of the new St. Petersburg Police Department Headquarters Building at 1301 First Ave. N.

The plaque honoring these courageous men reads as follows:

“In the 19060s, Black officers with the city of St. Petersburg Police Department were not allowed to work in white neighborhoods, could only arrest other Black citizens and were not allowed to take the sergeant’s exam. On May 11, 1965 a group of 12 Black St. Petersburg police officers filed a lawsuit against the city in federal court seeking equality in the workplace. On August 1, 1968 these men, known as the Courageous 12, won the right to carry out their jobs as intended and to be considered for promotion.

“The St. Petersburg Police Department proudly recognizes these men for leading the way for all minorities to serve our community in every rank of law enforcement.” 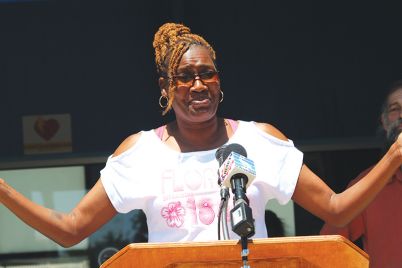