ST. PETERSBURG — Every time it appears lessons have been learned, we open the paper, the laptop or turn on the news only to discover it has happened again. Somewhere in America, the police have killed another Black man or woman.

We watched in horror as officers choked the life out of Eric Garner, George Floyd, and more recently witnessed a Kenosha, Wis., police officer shoot a Black man, not once, but seven times in the back.

The scenario following these and all shootings of Black folk is always the same. The police department’s public information officer or some other designated individual hastily engages computer files and retrieves any and all data that can be used to vilify the victim of the shooting.

The news media is provided with mugshots, prior arrests, convictions, and other information to suggest to the public the victim was not a model citizen and probably got what he or she deserved.

As I pondered this never-ending saga looking for answers and solutions, I landed on accountability once again. However, this time, I was drawn to pose a different question.

For a while, it is obvious police administrators must hold officers accountable for their actions, a more salient question is, what about us, we the people?  I applaud the Black Lives Matter Movement and the racially diverse groups marching and protesting for change, but what about those of us sitting on the sideline?  What is our obligation?

The Kenosha Police Department doesn’t deploy body cameras, so once again, we would be completely in the dark regarding the shooting if not for a citizen with the foresight to engage his cell phone camera.  And now that the footage and a host of unanswered questions are in the public domain, the police union offers a version of the incident justifying the officer’s behavior.  Are we to believe the union?  Wouldn’t it have been more transparent if body cameras were deployed?

In a previous column, “Say Something,” I called upon the community to write Mayor Rick Kriseman and city council members, calling for the implementation of continuous recording body cameras.  I got a great response, for which I am so thankful.

However, I must acknowledge there were individual members of Delta Sigma Theta Sorority and Omega Psi Phi Fraternity who said something.  They wrote the mayor and city council members endorsing body cameras for St. Petersburg police officers.

So the larger question is, why do we sit idly by and vicariously justify police malpractice through our inaction.  For the most part, police shootings are local, yet our attention to local issues is not sufficient and needs to improve.

The offices of mayor, city council, county commission, sheriff, state legislator, judge, state attorney, public defender, and governor are essential to our quality of life. However, too often, far too many of us only vote every four years for president, if at all.

Simply put, state legislators and city councils enact laws and ordinances signed by governors and mayors.  Judges preside over courts that rule on infractions, and jurors assist in the process by hearing cases and rendering verdicts.

State prosecutors run for office on a law and order platform, and public defenders due their best to secure justice given their heavy caseloads.  Jurors are selected from the rolls of registered voters.

It is a known fact that law and order is code for keeping Black folk in order, and juries seldom look like the individuals on trial. Judges also run on a law and order platform and must preside over trials where law and order is the paramount issue.

When we fail to register to vote and participate in the electoral process, we allow individuals who may not have our full interest at heart to be elected and juries to be composed of individuals who do not understand the Black experience.

History has shown that more times than not, jurors decide with police officers accused of shooting or assaulting people of color despite the evidence. Rodney King’s case is a classic example. The jury consisted of a group of white suburban housewives.

So, in addition to marching and protesting, we must step up our game. Middle and upper-class Blacks and whites must engage.  Too often, there is a tendency to believe “it won’t happen to me or mine.” But Breonna Taylor’s death shows it can happen to anyone, even a public safety employee.

We must cease routinely voting for law and order judges.  Examine candidate platforms and records when they seek re-election and vote for judges who are committed to justice and equality.

Demand that our state representatives and city council members take a public stand endorsing body cameras and other equal justice initiatives and policies. In other words, vote for your interests.

Let’s register and populate the voter rolls in sufficient numbers to enhance the probability of our selection to jury panels.  Vote against state prosecutors who stack juries and deny our participation.

And for those who do not vote, register and get involved.  If you need your rights restored to do so, explore the process and advocate for all necessary changes to eliminate the prohibitions.

Passive, disengaged behavior on our part only works to facilitate the justification of police malpractice.  All of us must get involved, vote our interests, and hold elected officials accountable.

Police chiefs must also be held accountable for the inappropriate actions of personnel under their command. Things will not change if we don’t change.  The time is now! 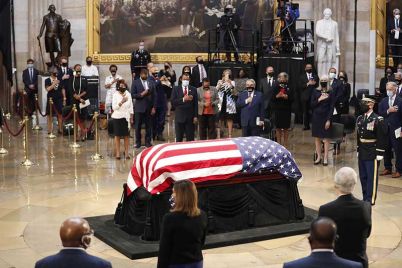 Jackie Robinson in 1972: ‘I Cannot Stand and Sing the Anthem; I Cannot Salute the Flag’

Jackie Robinson, in his 1972 autobiography, I Never Had It Made, described the moment… 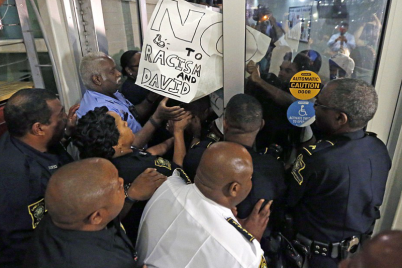 BY JAMES WILKINSON FOR DAILYMAIL.COM Angry students clashed with police at Dillard…