ST. PETERSBURG — On any given day, Major Nicole A. Moore may be writing a class paper, figuring formulas or working on her capstone class at Webster University in pursuit of a master’s degree in human resources management. However, her daily activity also involves doing what she loves most: being a soldier in the United States Army. 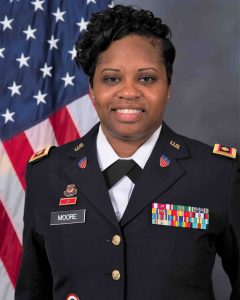 Moore was recently promoted to major in a ceremony attended by family and friends. She assumed duty as G-1 senior human resources officer for the United States Army Reserve Medical Command on May 14, 2018, following her previous assignment as G3 57 chief operations and plans officer for the 94th Training Division, Fort Lee Virginia.

Her new rank advancement to Major is the continuation of a dream come true.

“Nicole is a breath of fresh air on campus at Webster. She is a great student and an inspiration to be around,” said Joel Hornes, Webster University St. Petersburg/Tampa campus director.

While in high school, Moore envisioned traveling the world to see how other cultures lived. She is the eldest daughter of three siblings to Rickey and Diane Moore and a native of St. Petersburg. She is the proud mother to Laniya D. Etheridge.

Moore graduated in 2003 from Boca Ciega High School. Desiring a change in life, she moved to Fort Rucker, Ala., and began work at a childcare center. But that didn’t last long. Her thirst for self-improvement grew.

She had thoughts of joining the military as a way to obtain an education and improve her life. That thought would play out sometime later.

Moore made her way back to her hometown, enrolled at St. Petersburg College and graduated with a Bachelor of Applied Science degree in Public Safety Administration, concentrating in fire science and emergency management.

However, she still had the desire to travel and do more. She remembered her thoughts in Alabama of how the military could be the answer, so she went to the army recruiter’s office and joined.

“I just knew that there was more to life than what I was experiencing. The army said to ‘be all that you can be,’ so I accepted the challenge,” said Moore.

A trip to the United States Army Recruiting office on September 30, 2005, changed her life. As an enlisted soldier, she served as a dental specialist until her commission through ROTC as an Adjutant General Officer on May 9, 2009.

Additionally, she holds a certificate in Homeland Security from St. Petersburg College. Upon graduating, she became the first person in history from SPC ever to receive a commission from her hometown alma mater.

“I could not have done any of this without the support of my family. I am living a dream life. My parents have been such a blessing, and my daughter is the love of my life. I’m thankful,” said Moore.

Along with her family, schoolmates and other supporters, her army support unit attending the ceremony showed the love and influence for Moore as she belted for her G-1 section to sound off.

In unison, the unit responded with a resounding, Hoo-ah! This is to say, “Major Moore, we are here.” It is more than she could have ever imagined, but just as she envisioned as a soldier. 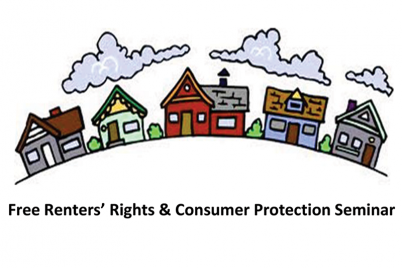 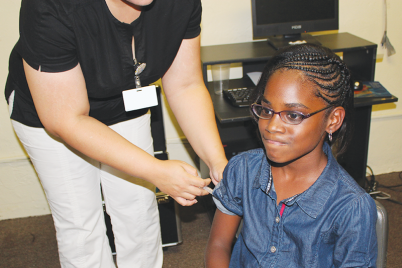 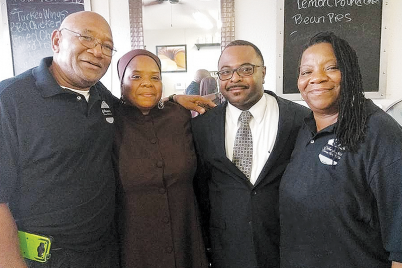 The heart to feed