ST. PETERSBURG – The state of Florida is full of sunshine, beaches, and unfortunately, human trafficking. With large amounts of immigrant workers, the tourism industry and juvenile runaways, the Sunshine State ranked third in the country for human trafficking in 2014.

This startling statistic led Audrey “Pat” McGhee of the Florida Department of Juvenile Justice (DJJ) to organize a free workshop on human trafficking to bring awareness to the crime that affects men, woman and children.

There are many industries that come in contact with trafficked people, but the workshop held Monday, March 20 at the St. Petersburg College Allstate Center focused primarily on the beauty industry. Valuable information was given out to those working in hair and nail salons on how to spot a potentially trafficked person.

Natasha Nacimento, founder and executive director of Redefining Refuge told salon workers to take notice if their teenaged clients are constantly changing their appearance. From hair to nails, to eye color, “changing appearances in short periods of time is a red flag.”

Traffickers will always want the girls to look pretty, so these young ladies will constantly be at the salon.

The majority of victims in the United States are considered youth, but Bethany Gilot, director of Human Trafficking for DJJ, said anybody can be a victim.

“While there are certain groups of people that are more likely to be victimized, don’t be caught off guard to what it seems like what a victim looks like,” she said. “Most people think of young females, but don’t forget about the males and adult victims as well.”

And according to Gilot, anyone can be a trafficker. Again, she urged those in attendance not to stereotype.

“Anyone can be a trafficker, including mothers, business people, peers – it’s not always organized criminals,” she said. “It can be a single person of varying ages and any sex. It could be a business entity like a nail salon or massage parlor.” 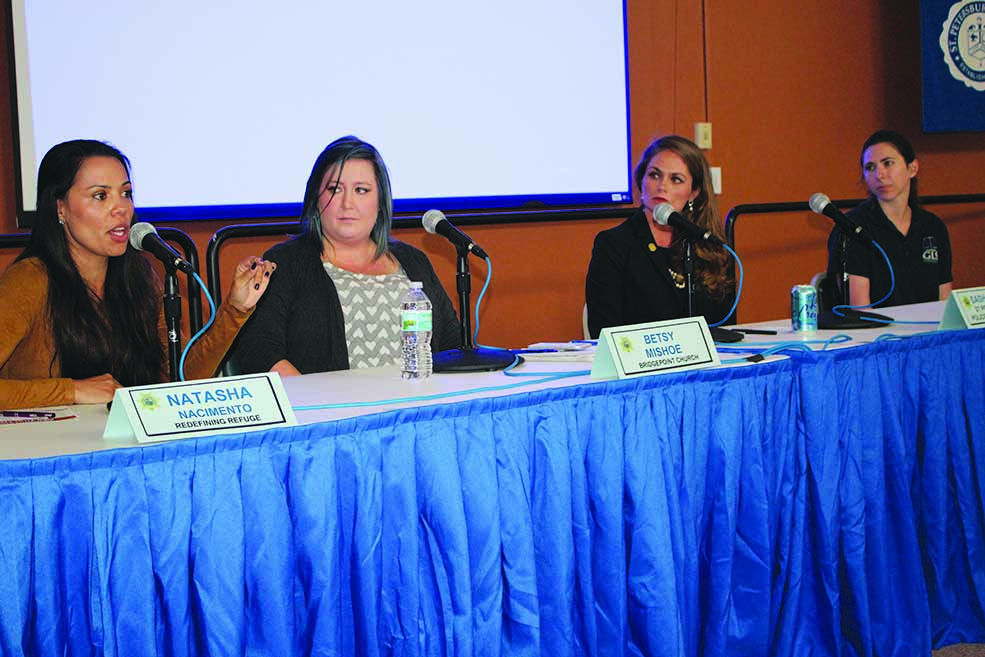 Human trafficking, whether it’s labor or sex, is the most lucrative industries in the world. It’s a multi-billion dollar industry, although estimates are hard because a lot of it is underground.

Gilot said it is high profit and low risk in comparison to narcotics, and the initial investment is much lower with humans than drugs.

“You have to buy the initial capital with drugs. With humans it’s just whatever your recruitment is such as a house party or forceful kidnapping or the grooming phase,” she stated.

She urged salon workers to get to know who sits in their chair.

“You have an opportunity to learn more about that youth, and also recognize if they come with signs of abuse or signs of a controlling relationship,” Gilot said.

“Immediately start taking notes if you see something that looks wrong,” she said. “You might not remember details so please write things down.”

She urged them to get a phone number and a name by telling the client you’ll text them their appointment times or any specials.

“The more information you can provide and the more facts that you can write down, the better witness you can be,” Lohn.

One young lady Nacimento helped rescue said she would get her hair done weekly and no one ever said anything about the older man who was always kissing and touching her.

“Your job is to be the eyes and ears,” said Lohn.

Jacquelyn Bradford with Gulfcoast Legal Services warned that in addition to sex trafficking to look out for workers who are working too many hours.

“If it looks like they wouldn’t choose to work under those conditions, maybe they’re not choosing.”

These types of situation occur mainly with undocumented workers who were promised a way to make money, but many times are held in servitude.

At the end of the workshop, two survivors of human trafficking told their stories.

Tampa resident Edie Rhea, founder of Healing Root, a nonprofit in the fight against human trafficking, opened up about her childhood where she was sexually abused and trafficked to men and women by the age of 10 by her stepfather.

By the age of 12 she got pregnant, had an abortion and endured many sexually transmitted diseases. This all lasted until she was 17 when she was kicked out of the house.

“Just because I was out of the life doesn’t mean I was really out of the life,” she said revealing that she became addicted to drugs to numb the pain.

Rhea went through extensive counseling and uses her story along with her strong faith in God to help others.

“The Lord has led me to open a safe home,” she said. “It’s lots of work but it’s worth it being able to serve and help other women.”

Katariina Rosenblatt, Ph.D., founded the nonprofit There Is Hope For Me, an organization that works to combat human trafficking. She too is a survivor of human trafficking and told her story at the workshop.

Rosenblatt was 13 years old when she was recruited at a hotel on Miami Beach while she was staying there with her family. Her first pimp was a 19-year-old woman.

“She was thin and pretty and everything I wanted to be,” she said. The 19-year-old trafficker was actually part of a ring that was running out of the hotel.

She was drugged, kidnapped all while in middle school. It took her years to get out and now she works with the FBI and Homeland Security to help eliminate human slavery.

If you suspect human trafficking, you can call your local police department or the Florida Abuse Hotline at 1-800-96 ABUSE or the National Human Trafficking Hotline at 1-888-373-7888. 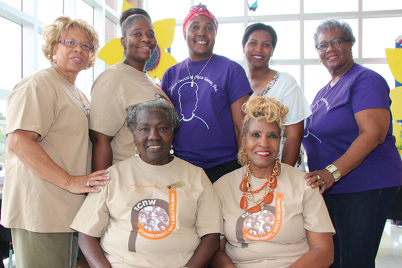 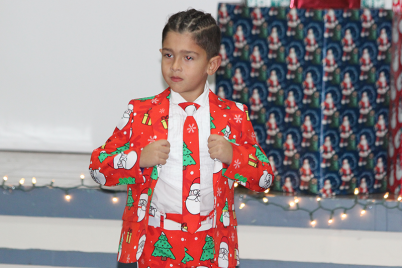 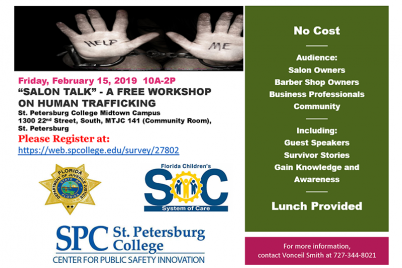 PETERSBURG — A workshop for salon owners, business professionals and the community…