ST. PETERSBURG – While a biting, frigid wind blew outside, the warm, lilting melodies of the standard “You Are My Sunshine” filled the downtown Palladium inside, before Mayor Rick Kriseman took the stage to deliver his State of the City Address Sat., Jan. 23.

“We love where we live,” the mayor told the assembled crowd of city officials and residents, “but we’re not perfect. There are still many lives to improve and many problems to solve.”

There is still much work to do, he continued, saying this is evident by the seven young men killed by gunfire at the end of 2015. He noted, though, that crime is trending down in St. Pete, and our return to community-oriented policing has strengthened the relationship between our police and the community. Statistics and progress reports, he conceded, provide no comfort to the mother who finds her son face down in an alley.

“Issues like the Pier and the baseball team,” he said, “they’re important but they don’t keep me up at night. What means the most to me are people’s lives.”

The city is addressing the risk factors that affect the children and young adults of St. Pete, the mayor said.

“We are determined to do what we can to end gun violence, and most of all the underlying choices that lead to violence.” Kriseman attested. 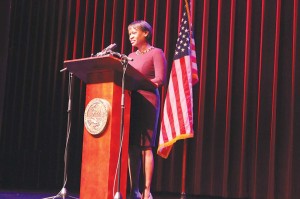 The approach is multi-faceted, he explained, as the city has put policies in place to create opportunity such as implementing paid parental leave for moms and dads, protecting the public with a strong wage theft ordinance and connecting the police and fire departments to aspiring first-responders at two south St. Pete high schools with new training and cadet programs.

The St. Pete police department has come a long way in a short amount of time, Kriseman said in praising the “professional, compassionate” department led by “first-rate” police chief Anthony Holloway and his command staff.

“There’s no reason to mince words. The department I inherited was appalling,” he said. “For too long we were failing the men and women who worked there, the people who protect us. We were also failing the public, and making the news for all the wrong reasons.”

Concerning the city’s urban affairs agenda under the direction of Nikki Capehart, the focus areas include opportunity creation, neighborhoods and families, commerce and cultural affairs. With leadership from partners like the 20/20 Plan, Pinellas Opportunity Council, the Urban League and the Pinellas County Ex-Offender Re-entry Coalition along with policy shifts, more of St. Pete’s residents are being given the jobs, tools and second chances needed to thrive, Kriseman stated.

The monetary investment in youth employment for the 2016 fiscal year is $885,000, a nearly 200 percent increase from a decade ago, and more than double the investment that he inherited, Kriseman said.

He noted the city’s efforts in stabilizing and growing the economy south of Central Avenue and thanked the Deuces Live and the 16th Street Business Association in particular for their hard work and dedication to these vital corridors.

The rich history and character of south St. Pete should be preserved, and though we are seeing results, we must be patient, Kriseman advised, as breaking the cycle of poverty and lifting up communities requires a long-term approach.

“For too long, city hall didn’t always do the right thing,” he pointed out. “Our leaders took shortcuts; they erected pretty street lights and built things without building up the people who lived here.”

Addressing the issue of school system in Pinellas, Kriseman said he doesn’t want any child going to a school called a “failure factory.” The public schools are essential to the city’s economic health, he noted.

He went on to say that the understanding that has been reached with the Tampa Bay Rays is “good news.” Allowing the team to explore future stadium locations in Pinellas and Hillsborough Counties prior to 2028 increases the likelihood that the team will remain in the city, or in the region, he said.

“I, of course, still believe the team’s current site, reimagined and redeveloped, is the best place for a new stadium,” he admitted.

Kriseman noted that more and more people would be living within walking or biking distance of the team’s current location, as 2,383 residential units are currently under construction or being planned for downtown.

He mentioned he will soon be announcing the formation of a “Baseball Forever” campaign to include St. Pete-based fans of the team, business leaders and elected government officials, who will be asked to pitch St. Pete to the Rays by demonstrating future fan and corporate support along with the many benefits of remaining at the current site or perhaps closer to the city’s downtown waterfront.

In addition to being a “major league” city, St. Pete is an “international” city that even competes for a Cuban consulate, the mayor said to loud applause.

Concerning the Pier, Kriseman said that “the new St. Pete Pier will truly be the people’s Pier,” adding that there will be something for everyone. It will once again be the “crown jewel” of the city and more specifically, of the new Pier District—the first stage of the waterfront master plan.

The mayor noted some other highlights of the year, including kicking off the Healthy St. Pete initiative, the launching of the Second Chance program for juvenile offenders and the opening of a St. Pete College campus in Midtown. He lauded city council and members of the community in helping to make the Skyway Marina District a reality and noted the “setting into motion” of the expansion of parks like the Boyd Hill Nature Preserve and Abercrombie Park.

In regards to the BP settlement, Kriseman said he remains hopeful that the city council will use the city’s portion of the settlement to fund his recommendation for “professional, comprehensive” climate change and resiliency plan. He praised the city’s new recycling program, noting that the residents have not only been recycling but doing it wisely.

One of the things cities worry about as it relates to recycling is contamination laws, he said, referring to the non-recyclable materials placed into the blue containers. The city’s contamination level was forecast to be as high as 20 percent, but according to a survey it was a mere seven percent. In addition, alley pickups are underway.

“That means more revenue received from our recycled material,” he noted, “and shows just how careful you have been to make sure we are successful.”

For the last two years, Kriseman said he has traveled around to promote St. Pete, to recruit businesses or to increase trade opportunities for existing businesses.

“Other cities, other countries, other continents—I’ll go anywhere,” he said in closing, “to tell the unique story of St. Petersburg and the people who call it home because it’s the people who are our greatest asset, who make the sun shine here.”