ST. PETERSBURG — Every year, Chairman Orlando A. Pizana and the rest of the Black History Committee at Greater Mt. Zion AME Church, under the direction of Rev. Clarence Williams, bring to St. Pete phenomenal lecturers to highlight their annual Black History Month program. Last Sunday, Feb. 23 was no different.

With the rousing speech of a crusader, civil rights attorney and author Benjamin Crump attacked the hypocrisy of America. With his recent bestselling book “Open Season: Legalized Genocide of Colored People,” Crump said he wanted America to at least acknowledge its own hypocrisy.

“They would at least have to acknowledge the discrimination, the racism that exists in every institution,” he said.

Crump’s role in the Trayvon Martin, Martin Lee Anderson Boot Camp, Jannie Ligons (State of Oklahoma vs. Daniel Holtzclaw), and Robbie Tolan cases show a legacy built around the idea that the Constitution applies to everyone at every level of society.

Crump came up with the “Open Season” title, he explained, in an emotional time — the aftermath of the killing of Michael Brown. Brown, an unarmed teen, was shot dead by a white police officer in broad daylight on a street in Ferguson, Mo., in 2014, drawing national attention.

“He was shot like a dog in the street!” said Crump, who has taken on high-profile cases such as the shooting deaths of Brown and Markeis McGlockton, right here in Pinellas County.

National Guardsmen with assault rifles, officers in riot gear, even drones descended on the small black community of Ferguson, Mo. as though they were at war. But all this couldn’t stop the Black Lives Matter activists for refusing to let Brown’s death be swept under the rug and refusing to be silent.

“It was the young people who were taking the lead,” Crump said.

He recalled one particular young black man who walked right up to the ominous line of the assault rifles and yelled out for all to hear — the onlookers and the media alike — that the officers should just kill him now in plain sight for the world to see because they would do it if the cameras weren’t on them.

“I remember thinking,” Crump said, “this young brother is absolutely right! It is important that the world sees how they’re killing us.”

It is important not just in high-profile incidents such as Michael Brown’s, but in all cases in every city and every state. Even every day, in every courtroom, with trumped-up felony convictions.

“They’re killing us softly,” Crump said, adding that one out of five black men in states like Florida, Texas, and Tennessee is a convicted felon.

If the trend continues, one in every three black men in the country in the next 25 years will be a convicted felon.

“They keep trying to lock our children up and throw away the key,” he said.

The young folks have to be brought up to understand that they are going to be targeted, Crump noted, adding that if you are a black person in America, it is almost inconceivable that you won’t be stopped by the police by age 40 — most of the time it will happen by age 25.

Crump pointed out that the hypocrisy even includes manufacturing plants that release toxic chemicals.  These plants are legal in communities of color while illegal in many other areas of a given city or district. He also took aim at the prison industrial complex.

As late as 2014, Crump said, it is documented that in the state of Californian, black and Hispanic women who were in the custody of the Department of Corrections were being coerced into having forced sterilizations.

And although African-American men make up approximately six percent of the country’s population, they make up about 50 percent of the people on death row. Crump claimed that African Americans who have merely been accused of killing a white person could wind up on death row. He cited many cases where white murderers were simply apprehended and taken alive while black men were shot with even the flimsiest evidence of any wrongdoing.

“In America, white people are arrested and protected while black men are shot and killed,” he said. “It’s ‘shoot first, ask questions later.'”

Black parents fear their child is going to be shot and killed by a person who is supposed to protect and serve him, Crump stated. He did, however, praise the jury that rightfully found policewoman Amber Guyger guilty of first-degree murder in the shooting of her neighbor, Botham Jean, in his apartment in 2016. She received a 10-year prison sentence, of which she’ll likely only serve five, Crump noted.

“It’s a journey to justice,” he said. “We take one step forward, one step back, because the punishment did not fit the crime.”

The only way we can overcome the legalized genocide of people of color, he said, is to make sure that our children don’t fall into these traps. 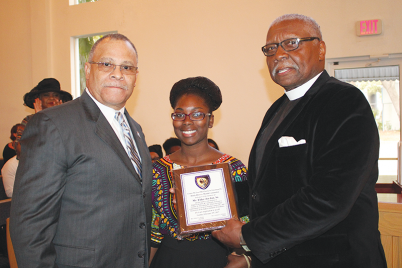