ST. PETERSBURG — Right here in Tampa Bay there are many families that need help. Whether they are in need of updated parenting advice or need assistance just putting food on the table, the Juvenile Welfare Board (JWB) wants to find solutions.

Thur., Nov. 20 at the Seminole campus of St. Petersburg College, JWB held their first Children’s Summit entitled “Collective Initiative” in order to discuss what more can be done to save the lives of the hundreds of children that die each year from preventable deaths, while also discussing ways to improve the quality of life for those in our school system. 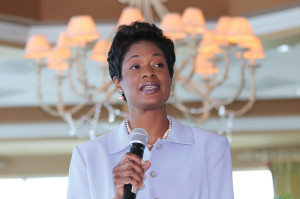 A standing room only crowd came out in order to brainstorm ways to improve the life of children here in Pinellas County. JWB Executive Director, Dr. Marcie Biddleman started the day off discussing silent killers in the community. From preventable deaths such as drowning, unsafe sleeping and head traumas, to hunger and school readiness, their goal was to get the conversation going and find ways to get the message out, along with needed resources, to the people who need to hear it.

A panel of experts gave information in the field of drowning, co-sleeping and trauma to the head, which incidentally are the three highest preventable child killers in the county. Elected officials, social service agencies, community leaders and host of caring citizens packed the room soaking up the latest statistics as the experts implored them to get involved and to get the word out to those who need the information most.

“I’m not sure we’ve gotten to where we really need to be yet in the sense that although we have parents in the room, they’re not the parents that we need to get the message to,” said Biddleman. With a high number of our local families turning to extended family members when it comes to raising their kids, Biddleman feels that more than just the parent needs to be part of the discussion.

Take newborn sleeping positions for instance. More than 40 children alone have been lost to unsafe sleep habits here in Pinellas County. This is caregivers not having adequate sleeping conditions for their child, caregivers bringing babies into the bed with them and accidentally suffocating them or due to outdated information.

“If I tell my mom to put a baby on their back, my mom will say, ‘That’s not how I did it,’” said Florida Department of Children and Families Interim Secretary Mike Carroll. Although Carroll advocates for young parents to get the correct information they need on the basics, he also sees a need for those extended family members who are so often now providing daycare, to be trained in how to prevent deaths in their newborns. “Regardless of what we provide them with as far as information, they will listen to their moms.”

So the education has to be more, reaching out to extended families, to birthing hospitals and to local daycares. Carroll believes that by immersing these young parents and their families in the proper sleep positions for children under one, that these deaths can be prevented.

Carroll also discussed shaken baby syndrome, which is another preventable death in the top three, classified as a head trauma. Over 50 percent of children diagnosed with shaken baby syndrome die and rough handling of a baby such as throwing them too hard on a bed or other hard surface is also life threatening.

Education and reinforcement amongst families is key according to Carroll and he urged young mothers to be careful of whom they entrust their child to, citing most cases involve an outside caregiver, such as a boyfriend, that in a moment of frustration and due to lack of training or a bond with the child may react inappropriately.

“A shaken baby takes a second and changes a life forever,” said Carroll. “A moment of anger where somebody hits a very young child, you can’t take it back, the damage is permanent.”

Educating young fathers on how to be a good parent is also a solution that the JWB and collaborative partners are working toward.

“You have to reach the dads, there’s no easy fix,” said Carroll who urges all agencies that are involved with children to get together and find ways to bring the training to the families in need who may not actively seek out assistance.

Senior Director of Community Relations Suzanne Luecke for the Tampa Bay Rays spoke on how to prevent drowning in our community. Florida loses more children under five than any other state due to accidental drowning.

Be Water Smart from the Start, is a successful drowning prevention initiative that was incorporated just last year. Partnering with organizations such as United Way of Suncoast, the JWB, Children’s Board of Hillsborough County and the local YMCA’s, the program has been able to reach some 69,000 households through their media campaign and offered services to 3,000 kids in the Tampa Bay area, making them water smart.

In the coming weeks, the partners once again plan to collaborate on how they can expand the program this year and make the idea of a yearlong program a reality.

“We feel like our reach is getting stronger and deeper as we move forward,” said Luecke.

Hunger as a health issue was also discussed. According to the USDA, some 49 million people in the United States declare themselves food insecure and 16 million of those are children. For Pinellas, that translated to more than 144,000 residents with around 38,000 of them being children.

Pat Rogers, Co-Founder of Tampa Bay Network to End Hunger and Liz Rhodes from the public defender’s office spoke on the impact hunger has on families and how it transcends the four walls of their home and leads to difficulties in school.

“Teachers were reporting that children were coming to school on Monday morning hungry and lethargic,” said Rhodes. “They weren’t on their game.”

Now various organizations have stepped up, along with the school board, and programs are in place to get the food to the kids, but even with organizations doing their part, it isn’t enough to reach every student in need.

“Even though those things sound separate, they are so interrelated,” he said. Grego also spoke to parents and community members on Pinellas County’s high expectations for the children in their public schools. We want to “change the mentality of all children can learn, to all children will learn.”

Grego admits that’s a different conversation and one that places a lot more pressure on all the role players, from administration, to teachers, to students and the value on education that is reinforced at home.

“We need to continue to define engagement,” said Grego who wants families to have more of a stake in their student’s success and to make a place for education at the kitchen table. “We all knew the priority when you returned from school, it wasn’t going out, and certain things had to be done before other things.”

A question and answer session was held so community members could gain further insight into how they can be part of the solution in getting the necessary information out to those who were not in attendance.