CLEARWATER — CiCi’s Pizza on McMullen Booth Rd. may never be the same after the birthday invasion of Jakhari and Javanni Jones. The brother and sister team celebrated their 11th and eighth birthday respectively last month, and both had a ton of fun.

To the delight of Javanni, the unicorn decoration, party music along with her nana, Sandy Jones, family and friends declared that this was the best birthday party ever. She smiled and smiled at the satisfied looks on partygoer’s faces. 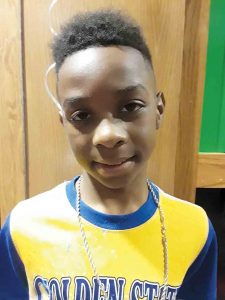 Jakhari, who has never met a moment that he didn’t enjoy, made sure that there would be life at this party. He danced, joked and aggravated his sister, all in good fun.

The siblings chose to have the event at CiCi’s because of the variety of games and the high probability of fun provided by Entertainment Unlimited, the game sponsors for CiCi’s Pizza. And having a wild party with no clean up afterward made the pizza buffet a top choice for parents Jareese and Avetta Jones also.

In typical 11-year-old boy’s fashion, the young men filled the party room with excitement from blowing streamers to making excessive noise, sending them into uncontrollable laughter. Javanni and her eight-year-old girl crew were more subdued with their entertainment.

As the well-wishers sang happy birthday, Jakhari swayed to the tune of the song. They each had their own birthday cake and chose to blow out the candles separately. Javanni gracefully blew out her candles on her cake while Jakhari made a spectacle of the act. He is a real show!

“It’s important to have birthday celebrations to acknowledge the life and the spirit of the one whose birthday we’re celebrating,” said Avetta Jones, the sibling’s mother.

Their grandfather, Ken Jones, who is an economic development manager with Hillsborough County Government, shared that it is essential to celebrate the little ones so that they know their value and can see the love that others have for them by acknowledging their life and their place on this earth.

The day took Jakhari’s mind off the disappointment he’d suffered not long ago. He had been selected to play in a Little League Football All-Star game, but because of a foot injury, he was unable to participate.

“I was so happy at first when I got accepted. Then when I got home, I was playing football and got tackled from behind. I heard it pop and it hurt really bad.”

The injury required a cast on Jakhari’s foot, but more painfully, it kept him out of the All-Star game.