Carolyn and Elihu Brayboy continue to buy property on the 22nd Street Corridor to stave off gentrification.

ST. PETERSBURG—Elihu Brayboy is a proud son of south St. Petersburg. He and his wife, Carolyn, have taken it upon themselves to rebuild historic buildings along 22nd Street South in the Midtown area of St. Pete.

In 2014, the Brayboys purchased and renovated their first property, now known as Chief’s Creole Café. With a little assistance from the City of St. Petersburg, the Tampa Bay Black Business Investment Corporation, and the Florida Community Loan Fund, the Brayboy family has purchased several lots in their old neighborhood as well as five buildings.

So far, the Brayboy’s have invested more than $250,000 of their own money into fighting blight in a once vibrant neighborhood that was the epicenter of the Black community during the days of segregation.

Their latest venture is the refurbishment of the old Ninth Avenue Service Station, located at 2184 Ninth Ave. S, which closed its doors in 2008. Albert Andrews, known affectionately as “Bubba Newkirk,” owned and operated the shop for more than 40 years before his passing in 2007.

Elihu Brayboy grew up in what is now called the Midtown area during the 1950s and 60s, just off 22nd Street South.  His mother was a school teacher and played piano at New Hope Baptist Church, and his father was a mortician at Sanchez Funeral Home.

“Back in those days, people had a sense of community,” he said. “Mr. Newkirk’s shop was one of the few places we could gather without fear of being discriminated against. After the crack era, the community changed for the worse, and from 1980 to 2012, it became very bleak, and it was hard for businesses to keep their doors open.”

The former IBM and Dean Whitter executives did not want to buy property and lease them at extremely high rates; they wanted to ensure that their commercial rental units remained affordable for small business owners who were just starting out.

“Now, with the creation of the Southside Community Redevelopment Area, the imminent redevelopment of the Tropicana Field site, and the Warehouse Arts District just a stone’s throw away, there is an incentive to revitalize The Deuces,” Elihu Brayboy explained.

“I don’t want to see the place I have called home my entire life become gentrified by money-hungry developers. Natives should not be pushed out of their homes because they can no longer afford to live there or operate a business there. All people, regardless of race, deserve to live, work, and play in a vibrantly healthy community.”

The Brayboy’s purchased the Newkirk building “as is” for $50,000. They have already expended $193,000 on renovating the building to its original condition. Along with installing a new HVAC system, double French doors, a new roofline, framing and updated electrical wiring, the building takes the term “mixed-use” to a whole new level.

The 1,900 sq. ft. commercial space has been divided into three separate affordable units, each providing tenants and their customers with their own unique experience. One unit has already been leased to an up and coming local female photographer.

“In addition to providing low-cost commercial rental space for business owners, we also want to feed the surrounding community,” said Carolyn Brayboy, while pointing to her garden overflowing with freshly ripe collard greens.

Midtown is a food desert, with the nearest grocery store being well over a mile away. The husband and wife team plan to expand their garden and make it a source of community pride. They feel if the neighborhood is proud of it, they will want to maintain it.

“This garden has become my baby. I can’t wait to see children working and playing with their parents in the garden. I look forward to offering nutrition and wellness classes here for families,” Carolyn Brayboy stated. “I want to see seniors get excited about eating what they’ve grown.”

She feels the only way they can do that is by investing and stop waiting for someone else to come into the community to fix what’s broken. “We must take responsibility, get up and fix it ourselves,” she demanded.

According to Elihu Brayboy, he does not want people to associate success with escaping life’s problems, and he tries to model this in his own life.

“Too often, our solution to the problem is: ‘I’m going to make money and leave the rest of these folks behind to fend for themselves,’” he stated. “Very rarely is the intent to get rich and come back home, to make your city a safer and better place for generations to come. It’s a lofty goal, but my mission in life is to make St. Petersburg a place we can all be proud to call home.” 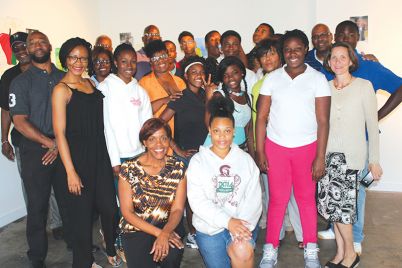 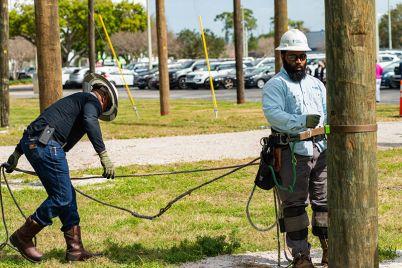 ST. PETERSBURG — Electrical line installers and repairers are in high demand in…