ST. PETERSBURG — Being born at 24 weeks and surviving was the beginning of Niaya Ann White’s fighting spirit. As a result, she lives her life knowing that it might not always be easy, but if she remains a fighter and trust in God, she will always find success! It’s her personal statement that drives her. 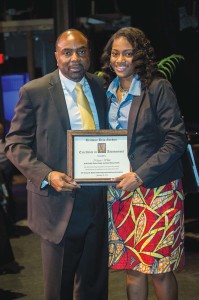 “I am so appreciative of all of the support that I have received throughout my life. There have been so many amazing people that have touched my life in some fashion,” said Niaya.

As a result, she is prepared to take the next steps in life’s journey. Acknowledging that she would not be the person she is today without her mom and dad, she said their support, along with her family and extended family, has helped shaped her life.

“As I begin this next phase, I know God has a purpose for me!”

Niaya played her first two years at The Boca Ciega High School before transferring to Calvary Christian, and yet another challenge.

“Making the transition from public school to private school was a huge challenge for me,” she said. “Everything was changing, I didn’t know what to expect; the culture was different and I was already having success.”

She began learning how to build relationships with people from varying backgrounds. The teachers genuinely cared and had high expectations that students be successful. She learned to embrace the challenge and grew to love the school. “I’m thankful,” Niaya averred.

Aside from basketball, this model beauty athlete received many other special honors, such as being the MLK Day of Service Teen Ambassador, Emancipation Proclamation Youth Speaker, Alpha Kappa Alpha Emerging Young Leaders, the ZUO Pretty Petals Tea Mistress of Ceremony, was in the Cashmere and Colors Modeling Troupe, was the Frank Pierce Recreation Center Little Miss Pageant winner, Calvary Christian Mission Trip volunteer to Guatemala and was in the 2015 Essence of Ebony Pearls Debutante Cotillion court.

Niaya’s next phase in life will see the aspiring ESPN sports analyst attending Hampton University on a scholarship where she will join the Lady Pirates Basketball team. She will major in communications with a minor in sports management. The Hampton Lady Pirates is a premier basketball program in the country and regularly make it to the NCAA tournament.

“I can’t begin to name all of the people that have helped to shape who I am as a person, athlete, student or emerging community leader,” she said.

Niaya said that she was blessed to have a “real village” supporting her, and thanks God for her parents, David and Ann Sherman-White.

“One of my biggest highlights, aside from being a four-year starter on my school varsity basketball team, was having the opportunity to play in Lakeland in pursuit of a state title in basketball. But, the greatest feeling is having people around me that I know love and care about me,” she said.

Surviving a premature birth brought out the fight and competitive spirit in Niaya. Her knowing that life might not always be easy keeps the fight in her and her trust in God strong. She expects to find success! It’s her personal statement that drives her.