Erica Hardison with board member Abenah Redwood-Adams representing One Community Grocery Co-op at the VISIONDISTRICT Expo in April.

ST. PETERSBURG — The One Community Grocery Co-op (OCGC) recently celebrated its first anniversary during the monthly “$3.00 Meal” the co-op held at Pinellas Technical College (PTC) on May 23.

OCGC, which will be located in south St. Petersburg, is in its first stage of planning and implementation and is currently working to build its membership to 300 residents and, or, families to be part of the initial co-op launch.

The One Community Grocery Co-op was created in south St. Petersburg in 2018.  After a long history of big box store closures and failed agreements, residents started asking for control of their food security and access in the form of a grocery co-op.

The call for the co-op was formed out the 2015 People’s Budget Review, which began to collect the voices of south St. Pete residents and asked for input on what they wanted from their city and what residents desired to see happen in their neighborhoods and communities.

A year in the making, OCGC was recently chosen as one of the “18 Big Ideas to Transform South St. Petersburg’s Economy” presented at the recent VISIONDISTRICT Expo in April at PTC.

The VISIONDISTRICT One Community Economic Innovation Plan also provided an online survey to gather community ratings on which ideas will be selected for ongoing development through the One Community Plan (funded by the City of St. Petersburg to aid in finding new approaches to economic growth).

With voting still open, OCGC Board President Erica Hardison, who presented at the Expo along with fellow board members Abenah Redwood-Adams and Judith Turner, is optimistic about the current voting tallies, which show OCGC high up in the ratings received from survey participants.

“We are in the top three out of 10 for the VISIONDISTRICT’s Big Ideas,” shared Hardison, who added that online voting is open till the sixth of June.

“We are an all-volunteer organization at this point, so we rely heavily on word of mouth,” she noted.

Hardison explained that anybody can join the food co-op if they live in Florida and if they choose to leave, they can transfer their $225 membership fee to another resident, or receive a full refund.

Memberships are open to individuals, families and even businesses.

“We have a number of businesses who have joined,” said Hardison. “Other co-ops can join — a credit union is a type of co-op, and we have Achieva Credit Union as a member. It’s for anybody with an interest in food, anyone who really wants to support and see this co-operative food system and food security movement develop,” she added.

Hardison had been a member of a grocery co-op while in college at Florida A&M, and she watched it grow to a point where members even became employees, including herself.

While she also joined “buying clubs” here in St. Pete, Hardison said none of them moved on to becoming co-ops. With her longterm interest in sustainable urban agriculture, she was eager to join the collaborative group that came out of the People’s Budget Review and the New Deal for St. Pete meetings on food security.

Like other urban agricultural activists, Hardison refrains from calling St. Pete’s lack of fresh food grocery stores indicative of a food desert and instead refers to the situation as a condition of food apartheid.

She feels the distinction between the two is vital to understand.

“It’s an important discussion because it sets the context. When we think of ‘deserts,’ they are these naturally occurring things in nature. When we talk about ‘food apartheid,’ we talk about policies, how they are linked to food and food insecurities in certain areas. It’s more of a discussion about what policies exist that allow conditions of food insecurity to exist,” explained Hardison.

These and other informative discussions happen at the OCGC’s $3 Meals, which are scheduled through the rest of the year every fourth Thursday at PTC from 6-8 p.m. The $3 Meal is an opportunity to enjoy a healthy menu, to learn more about food co-ops, community gardeners and gardening and also serves as an OCGC membership meeting and signup for newcomers.

For more information on the One Community Grocery Co-op, you can stop by one of the $3 Meals happening at PTC, 901 34th St S, St. Petersburg, on June 27, July 25 and August 22 (and continuing on the fourth Thursday of each month through the rest of the year). 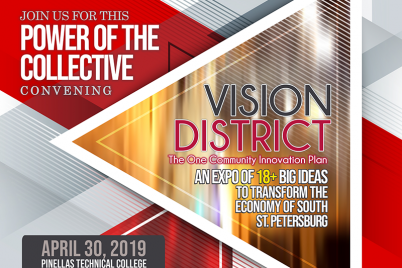 BY GYPSY C. GALLARDO, Contributor ST. PETERSBURG — “What can we do to grow the…

(Family Features) Corn may be the top crop in Iowa, but many consumers are not aware of…