Jordan Belliveau was found lifeless in Largo Park in 2018. His mother admitted she hit him and left him there.

DUNEDIN – When two-year-old Jordan Belliveau was found lifeless in Largo Park in 2018, his life snuffed out at the hands of his 21-year-old mother, Charisse Stinson, the blame game immediately began. Media pointed to flaws in the foster care system, family pathology, and negative influences surrounding Stinson and the baby’s father, Jordan Belliveau Sr.

On the local level, the Belliveau case stirred a grandmother to become an activist for parental wellness. Chantala Davis founded the nonprofit A Mother’s Arms (AMA) in response to the incidents leading up to Jordan’s death and response to experiences closer to home.

Davis, a Clearwater native, was moved by both the unnecessary and horrendous death of the infant, and the no-win situation Stinson, a young mother under stress, with an unstable upbringing and no support system, found herself in. Once a teenaged mother herself, Davis decided to act when her own daughter began to cry out for support.

“People fail to realize — yes, the children are an asset in our lives, and they are our future — but what about the parents? Some of them are broken, some of them have not learned things, some of them don’t even know themselves,” shared Davis. 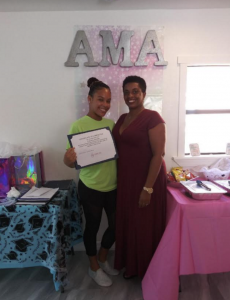 Chantala Davis (right) posing with one of her A Mother’s Arms program participants.

A graduate of Eckerd College with a Bachelor of Arts degree in Human Service, Davis held positions as a program facilitator, youth support, and outreach worker and participated in various local groups and organizations as a community advocate before founding AMA.  She is also a member of the National Black Child Development Institute.

But Davis said it’s her life experiences and those of family, friends, and community members like Stinson that informed her decision to start A Mother’s A(rriving to)  r(elieve a) m(other’s) s(tress).  Davis had the opportunity to speak with Stinson after she caused her son’s death.

“The one thing she kept saying is that it didn’t come with instructions on how to be a parent. And she said she didn’t have any backbone. She didn’t have the village.”

And it is that exact lack of support that Davis is targeting.

“It is a village effect that I’m trying to bring back — helping us to understand one another and support and empower through strength, not the weaknesses. That’s what we’re not concentrating on.”

Davis has completed two sessions of her eight-week program, servicing intimate groups of mothers who have met weekly online to work through the curriculum Davis provides, along with presentations by online guest speakers.

“Of course, an eight week-curriculum is not going to teach someone everything about themselves. But I bring in guest speakers and the expertise that they will normally not seek out,” acknowledged Davis, who noted that many women don’t go to workshops – or even read books.

Various life topics are presented, such as balancing a budget, saving money, and financial issues, that are often difficult to discuss.

“Some of them have not even learned but had to be taught how to be an adult or how to manage their bills. These are stress triggers — when a single mother is sitting there, and they’re trying to figure out OK, how do I get this bill paid?”

The curriculum also reviews parenting styles. Davis recalled a class she had at Eckerd that revealed to her that she had issues stemming from her own upbringing that needed addressing.

“Obtaining my degree from Eckerd College had me looking in a mirror. I’m sitting there, and I’m going through everything in class, and I’m reading up on some things, and I’m like: “Oh my God; that’s me. That’s why I do things like I do.’ That’s something that it took me until I got into college as an adult to understand. So, just imagine how many adults are walking around here who don’t even know themselves?” mused Davis.

Recalling how, as a young pregnant teen mom, she skipped over a lot of childhood and went straight into adulthood, Davis said there’s a lot of things she missed.

The curriculum goes into problematic habits inherited from childhood – yelling, shaming, and demeaning children – all behaviors Davis noted that negatively impact a child’s sense of self.  Sometimes they touch on complex topics that might cause shame if Davis didn’t handle the discussions as gently as she does.

“Sometimes they’re embarrassed; we’ll have sessions called ‘peel the onion,’” said Davis, who encourages her participants to share anonymous questions or topics that she addresses without stating anyone’s name.

“She teaches you self-evaluation,” said Davis’s daughter, 31-year-old Chanteia Simmons, who has gone through the program. “It’s good for mothers or parents because it takes you back kind of to the basics of yourself and teaches you how to re-evaluate how you’re thinking.”

Maranda Douglas shared, “I think it’s a much-needed program for first-time parents or mothers or any mothers that are in distress. It was really nice to be able to just take a minute to really think about myself and my personal wellness and then how that reflects into my parenting style. That was useful.”

Nicole, a 46-year-old mother, shared, “It helps you with a lot of things you go through in life. You learn that things we were taught growing up are not always right. “

Board member LaTisha Bell has been a case manager and child and family consultant. She believes in AMA’s mission and its supportive work to bring about more safety for young children.

“Our children will have a better chance of not being abused when they have these types of services — resources like AMA — in place.”